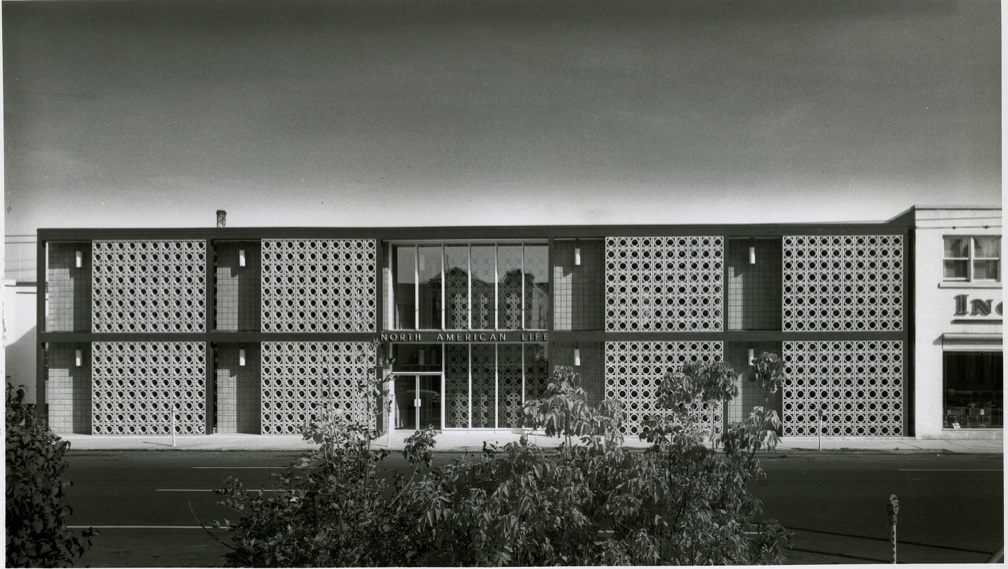 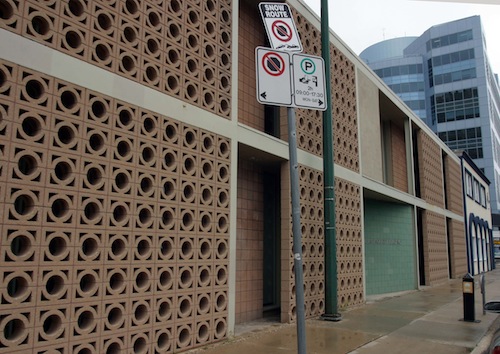 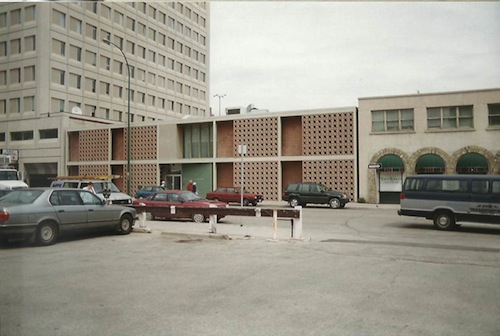 The Law Society of Manitoba

Architects Ward and MacDonald designed this 1959 building to showcase a product on the market called Flexicore. Marketed locally by Supercrete Ltd., this is a system of long span, precast concrete slabs with hollow cores that serve as raceways for wiring and ducts for air conditioning. They are laid in place as both floor and ceiling, eliminating pouring concrete into forms and waiting until it cures. It thereby saved time and money, to which the architects gave a hearty endorsement as an innovative building system in the RAIC Journal of 1960.

This showcase building, constructed for the North American Insurance Company, further demonstrated pre-cast innovations with the use of its exterior sun screens across the front of the building. In a circle-within-a-circle pattern, designed by the architects, these pre-cast panels screen the large windows behind, blocking the long rays of hot summer sun while allowing the shorter winter rays in for good light and thermal sun-control, appropriate on the west face of a prairie building. While acknowledging that the light-admitting screens help to express strong spatial character, their role in climate control, privacy and security for the windowed space beyond were the priority. Together, these two pre-cast concrete systems helped reduce building costs at the time of construction, reduced climate control costs in the long run and gave easier access to the electrical/mechanical systems for future maintenance and alterations.

The North American Life Building, while employing this hidden pre-cast slab system, managed to express the design versatility of pre-cast concrete in the screens. The screen patterns alternate in unequal panels with the concrete walls, which are scored in a slightly smaller square pattern. From a distance, the sun screen is far more obvious but at street level this interplay begins to appear.

North American Life Insurance occupied only half of the second floor and although their name was used for the building, they never actually owned it. Architects Ward and MacDonald were long-time tenants in the other section of the second floor, while a variety of doctors, lawyers and accountants occupied the first floor. In 1985, the space on the ground floor was altered for the Law Society of Manitoba, who own the building and occupy the entire building.