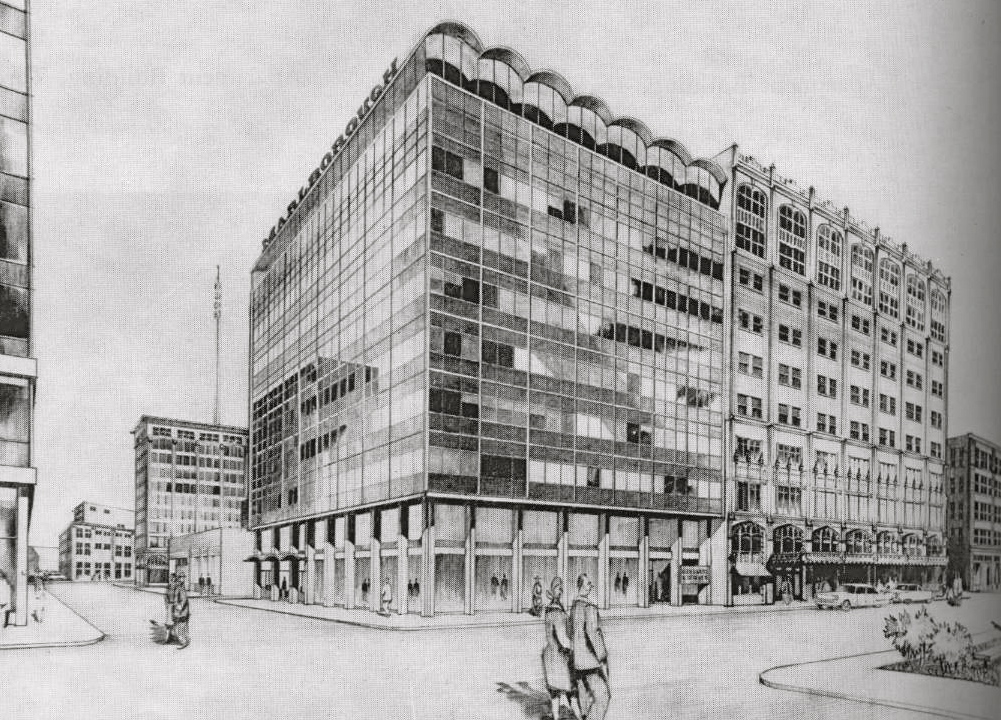 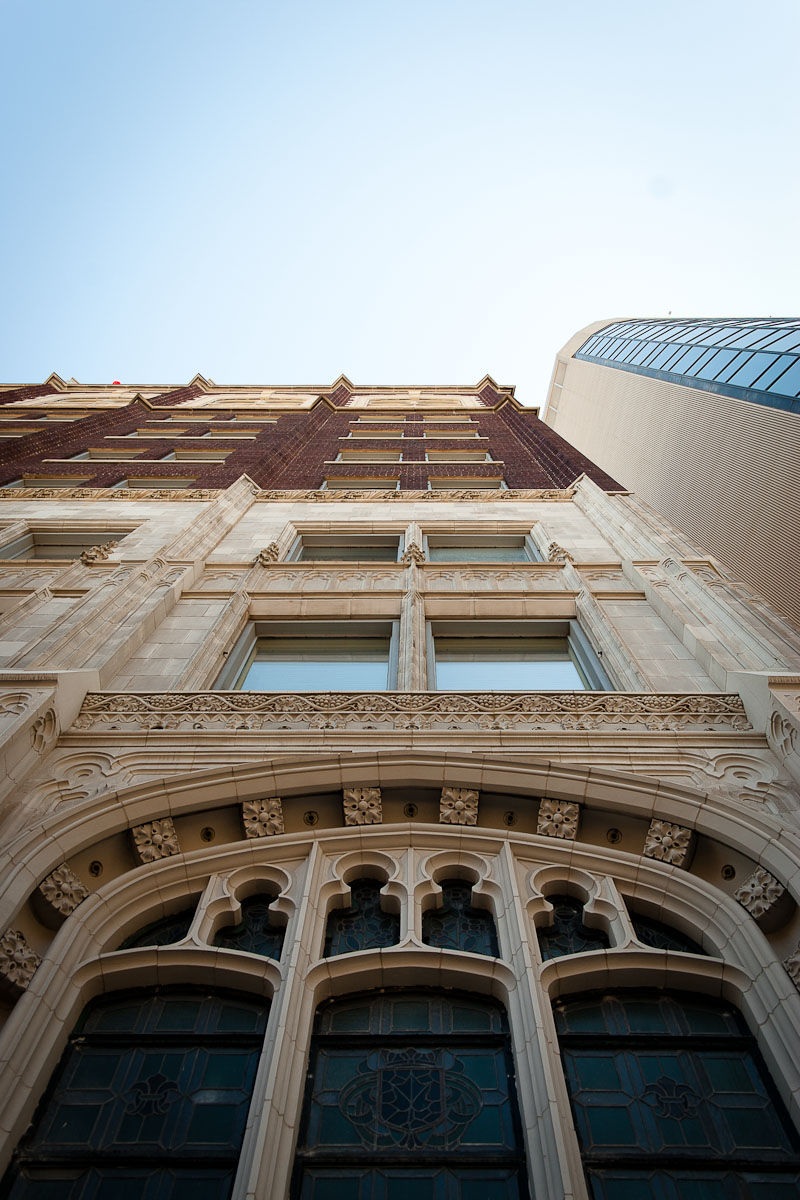 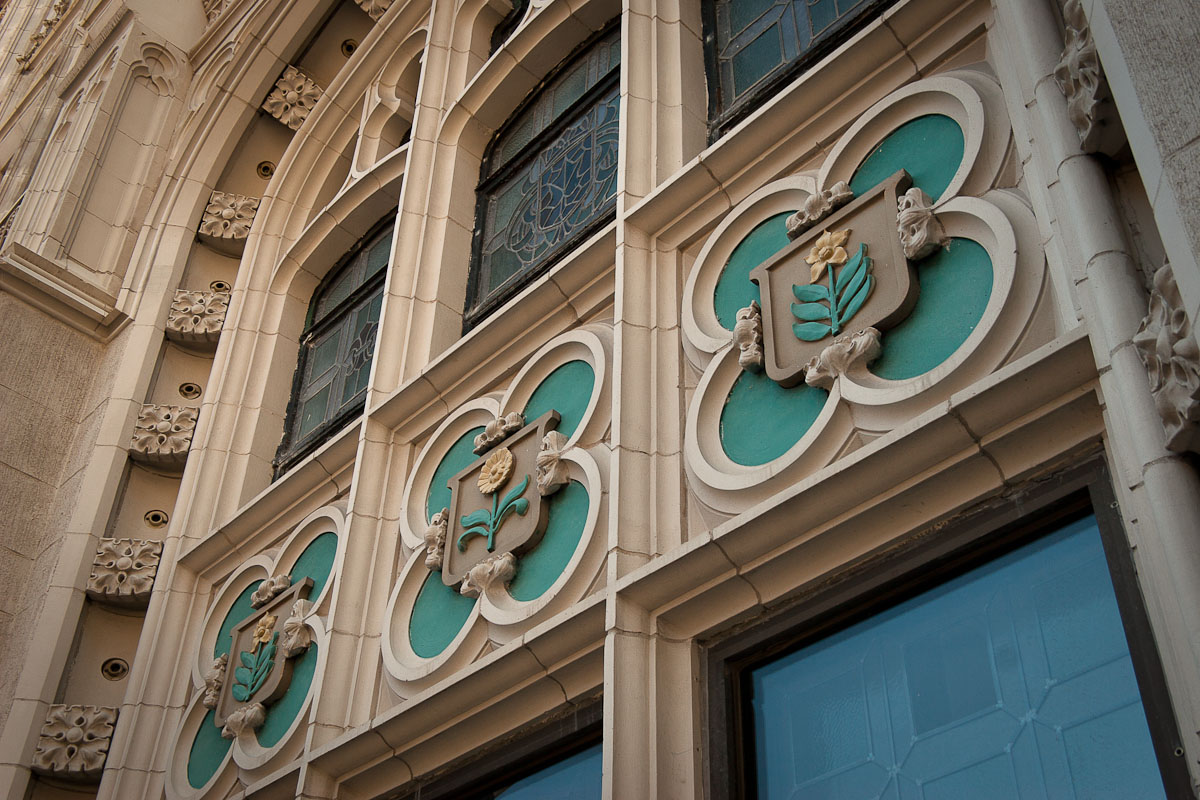 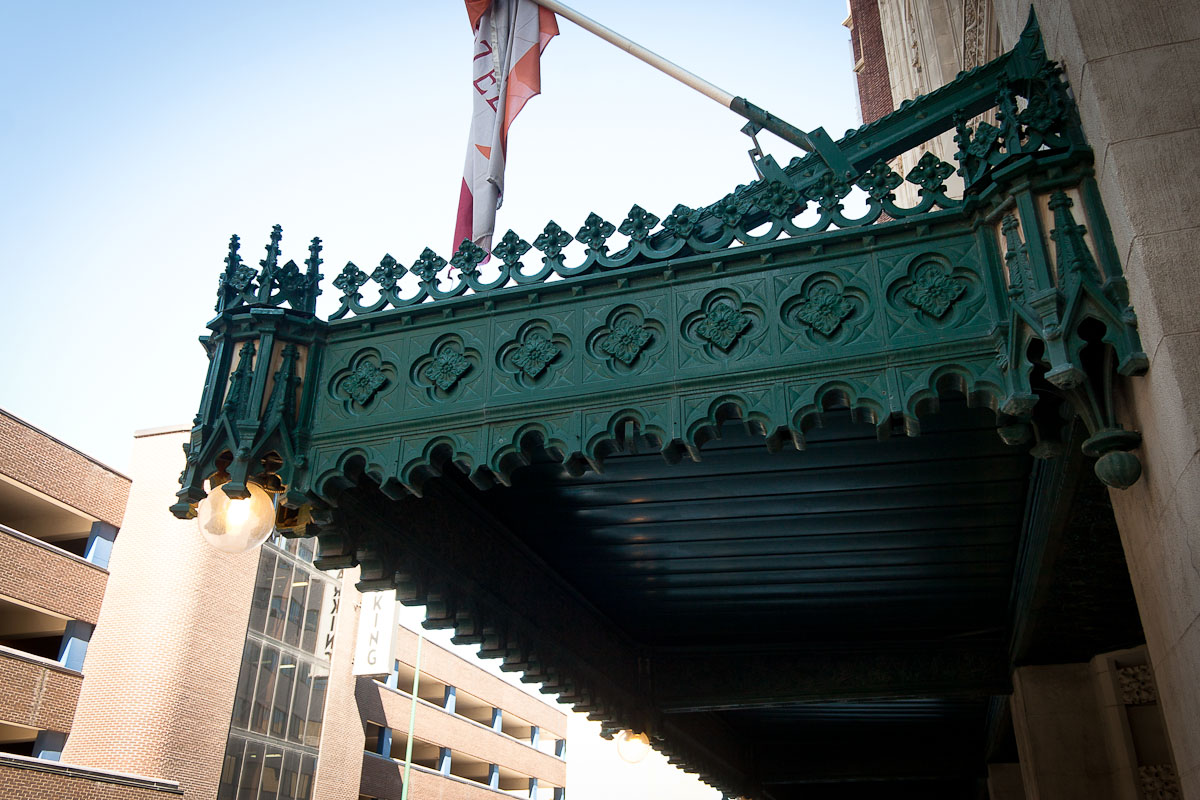 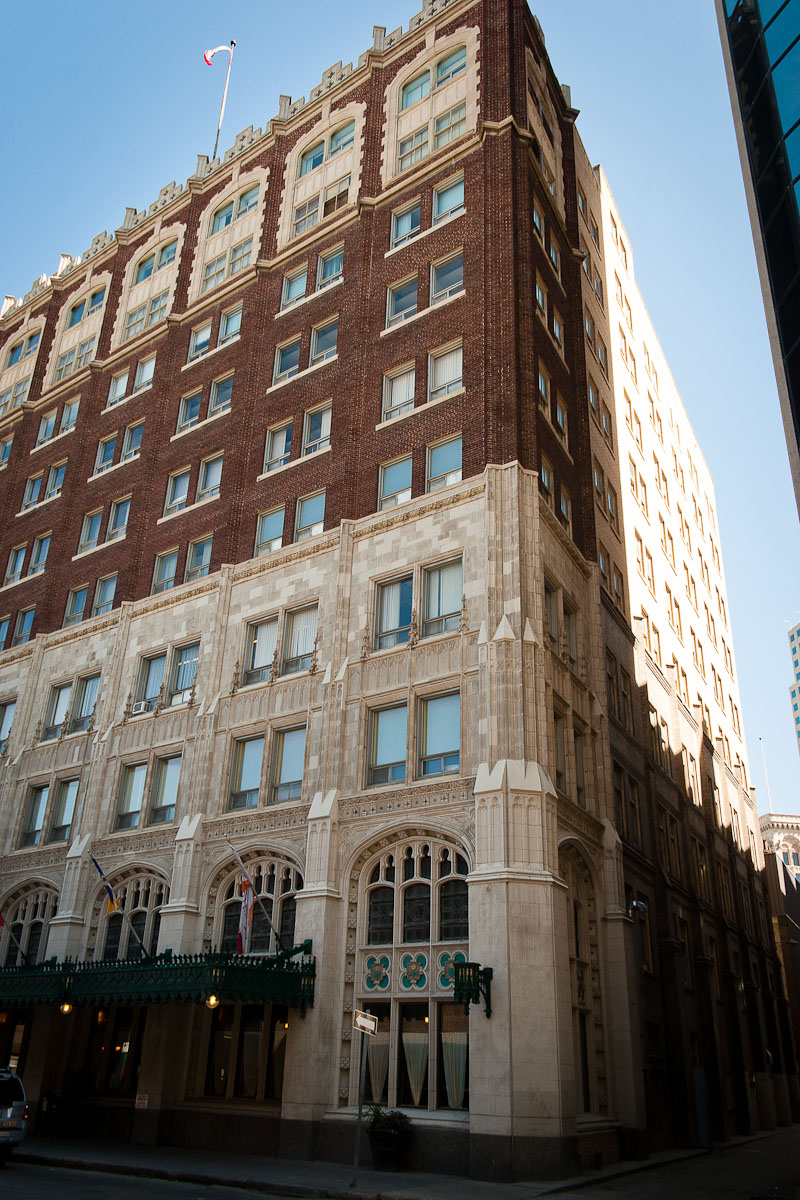 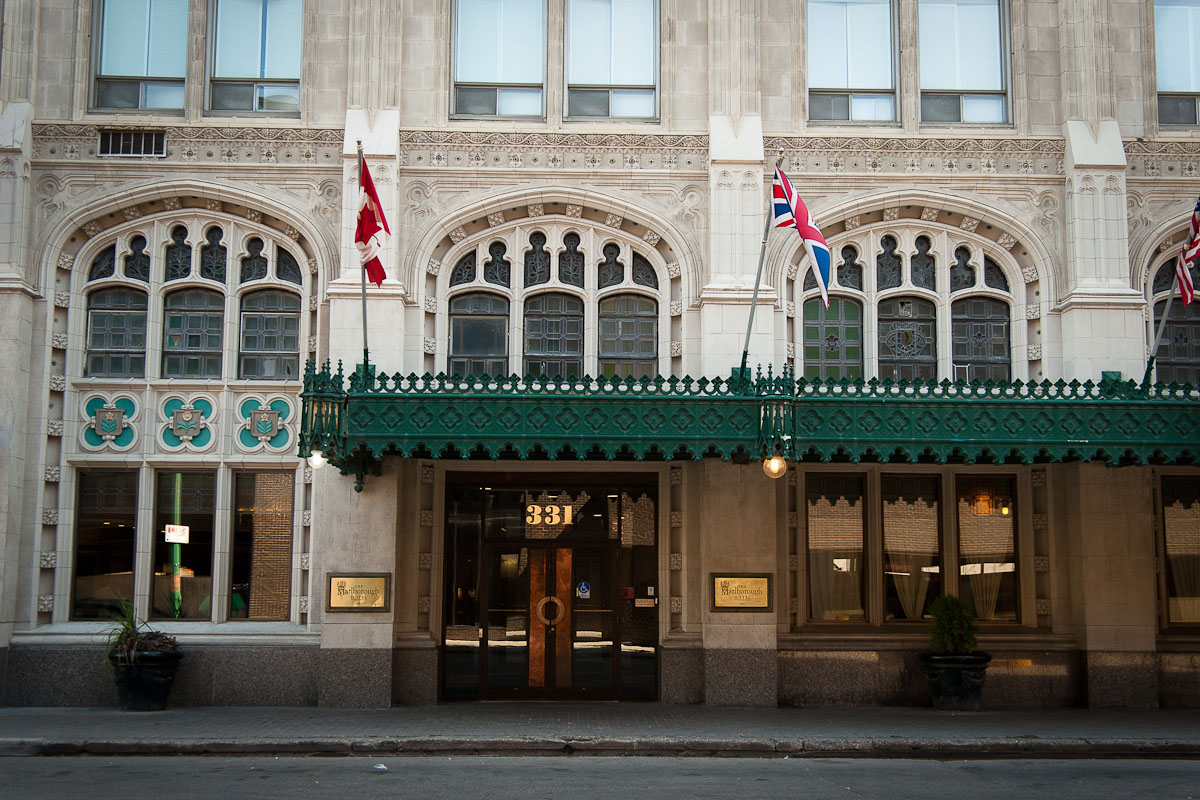 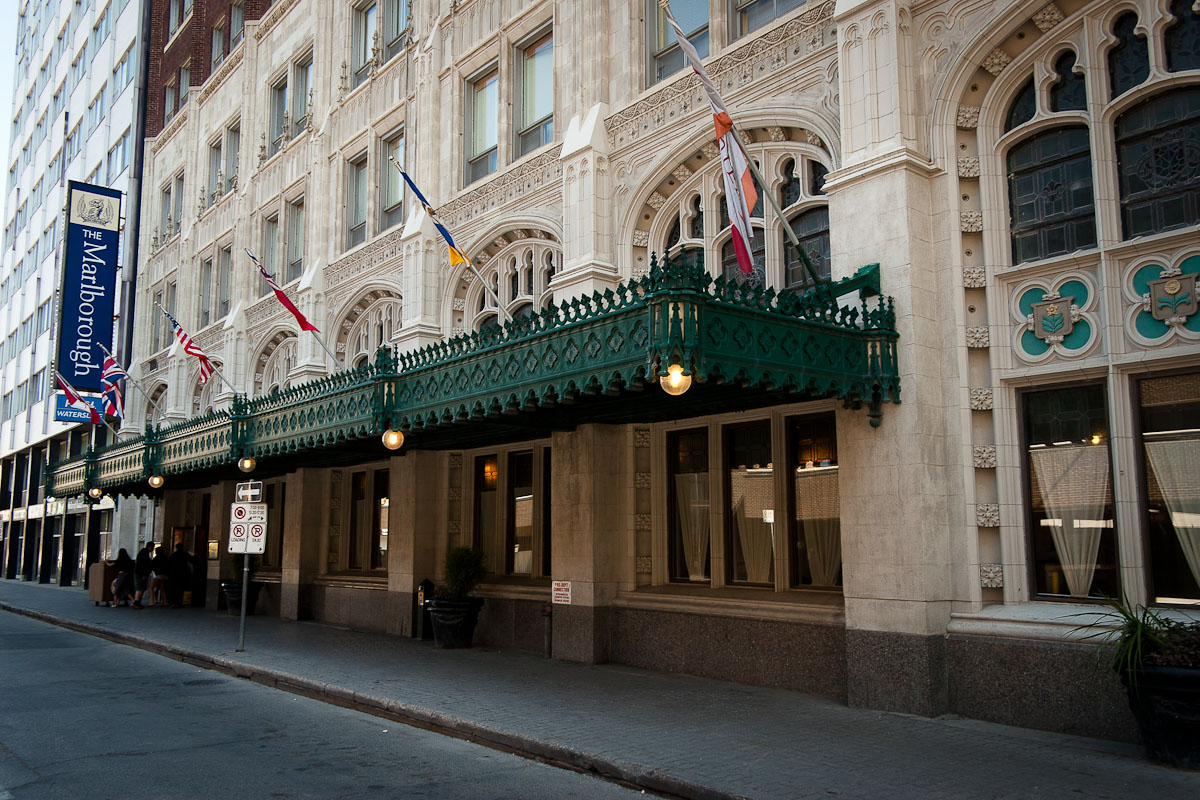 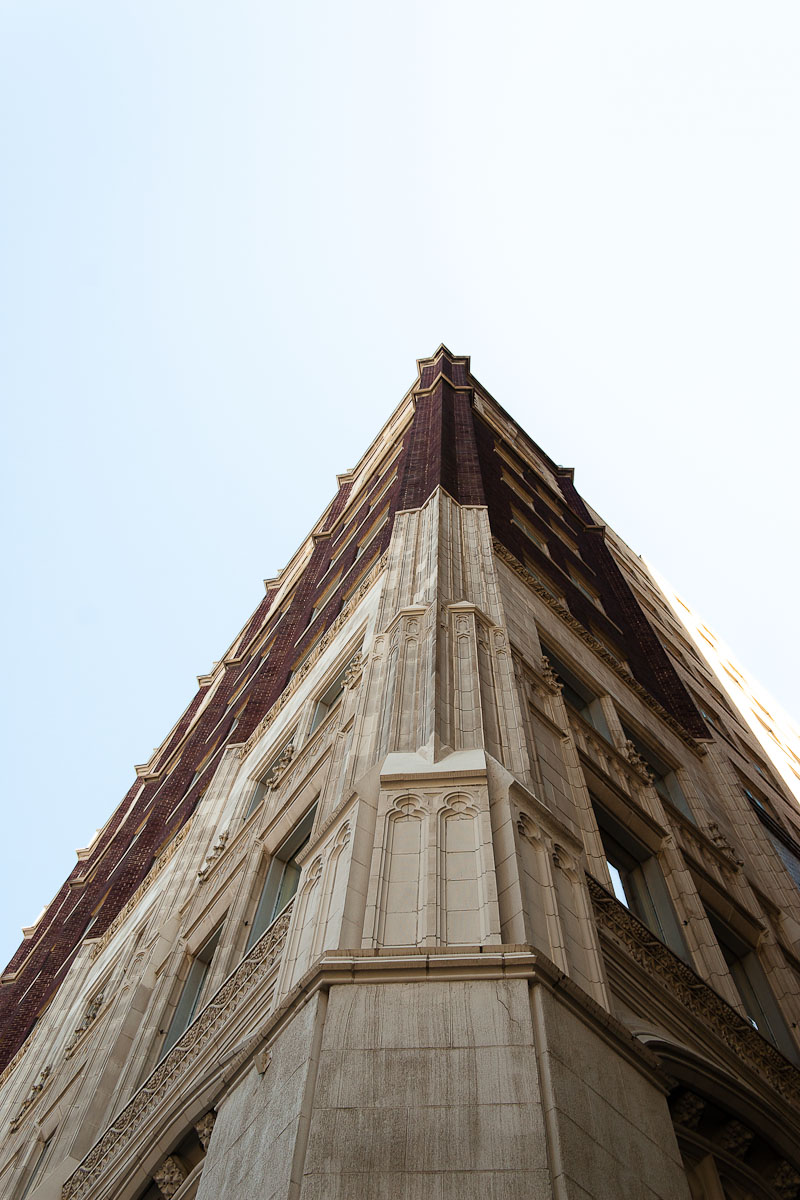 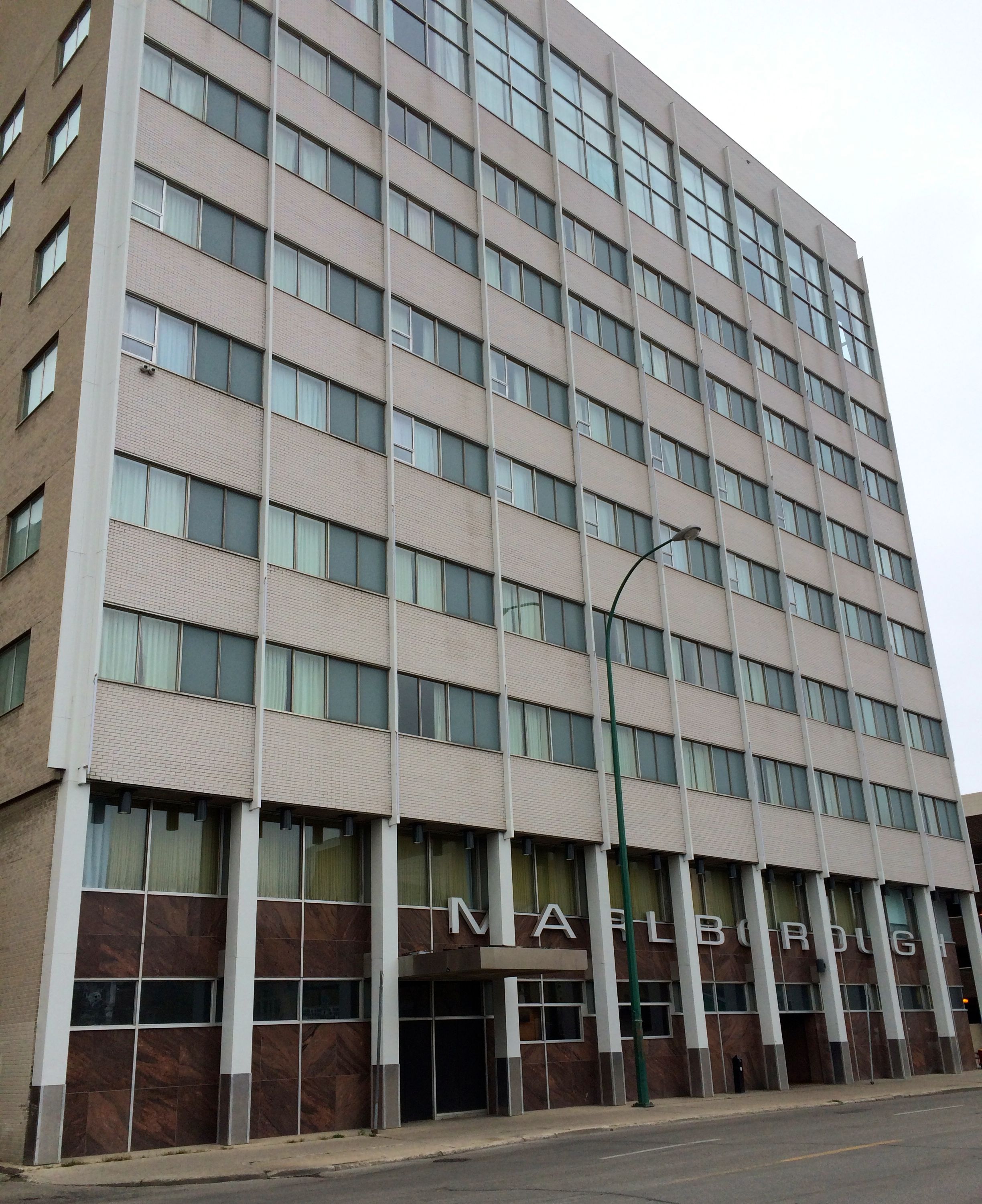 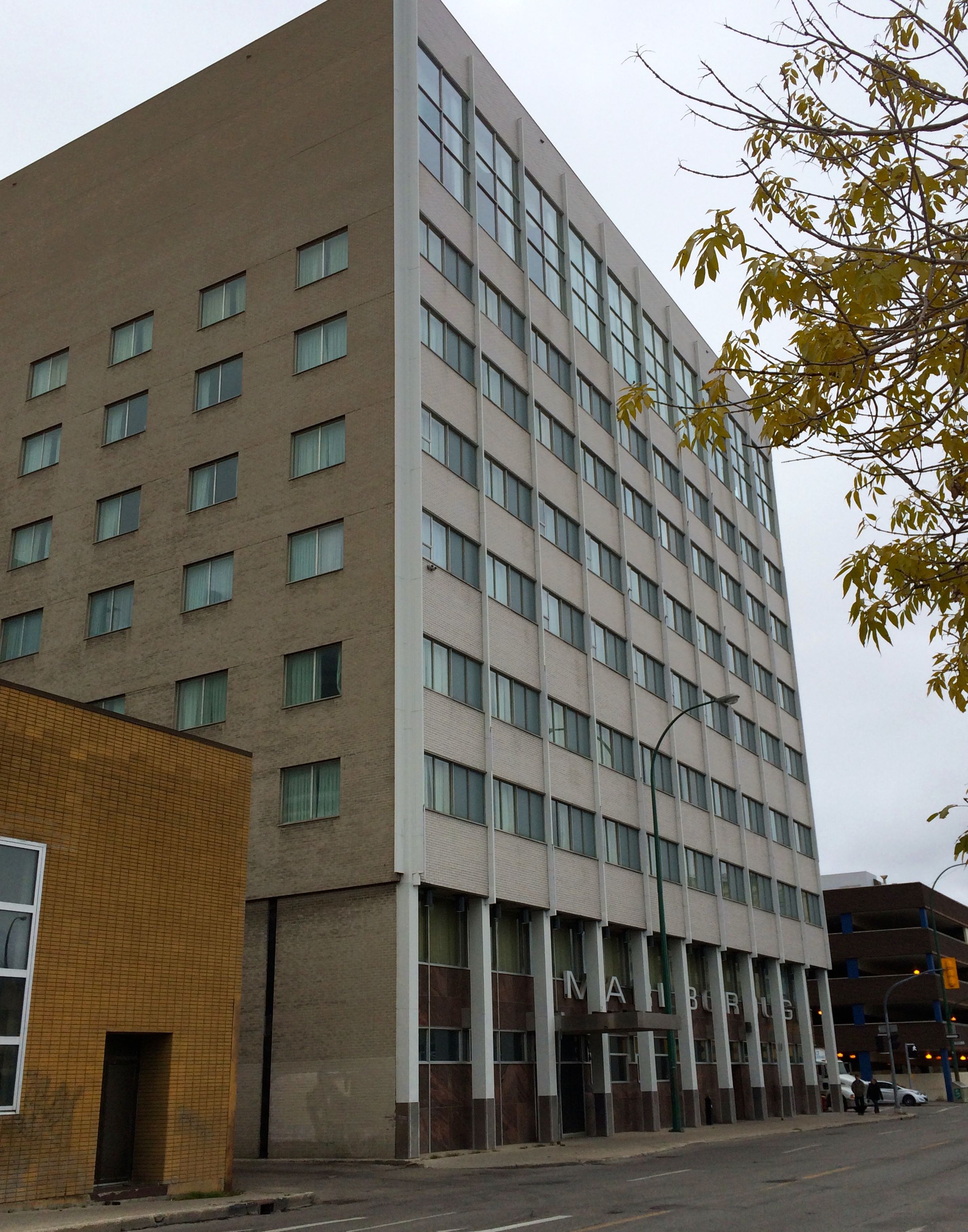 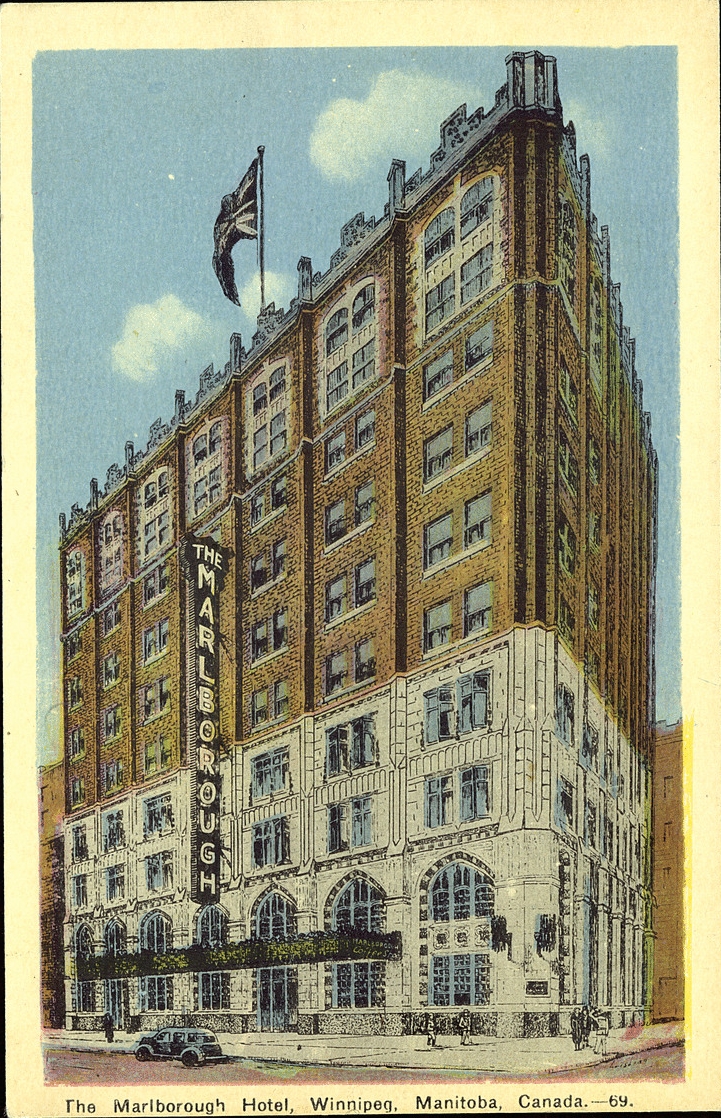 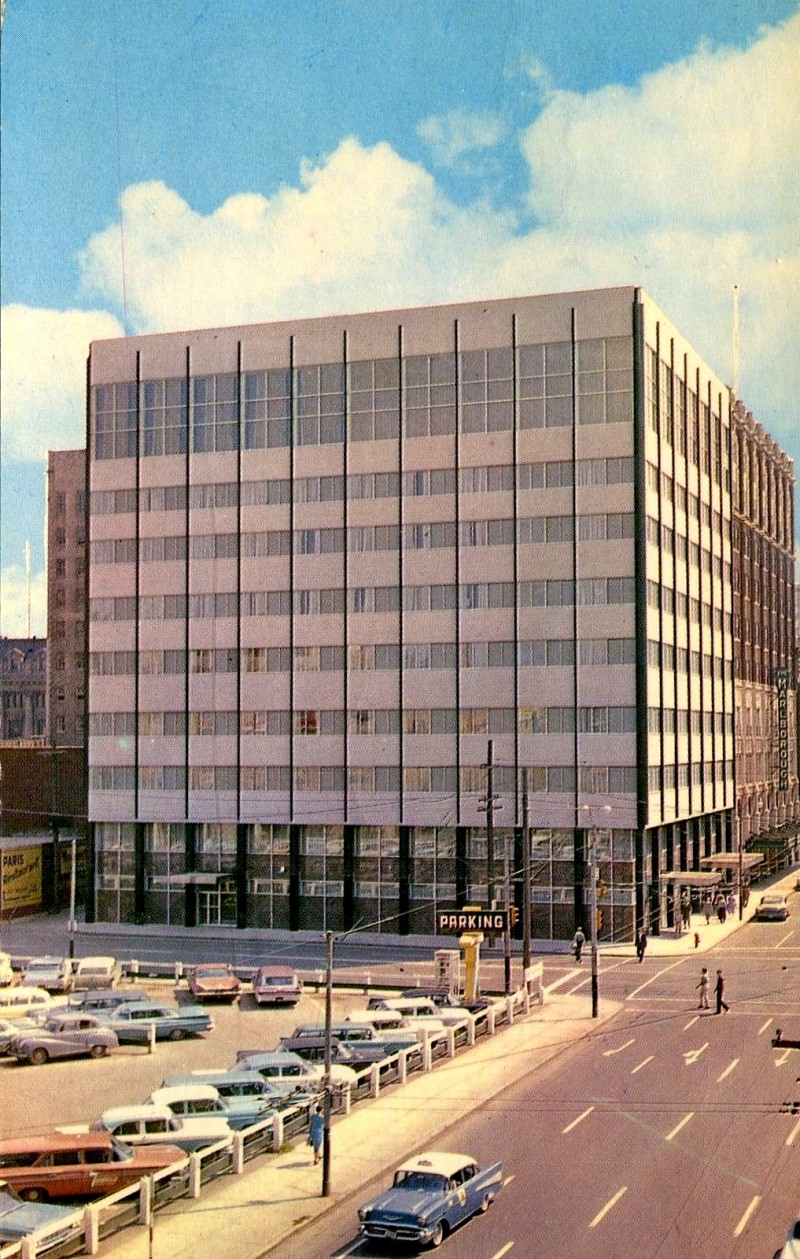 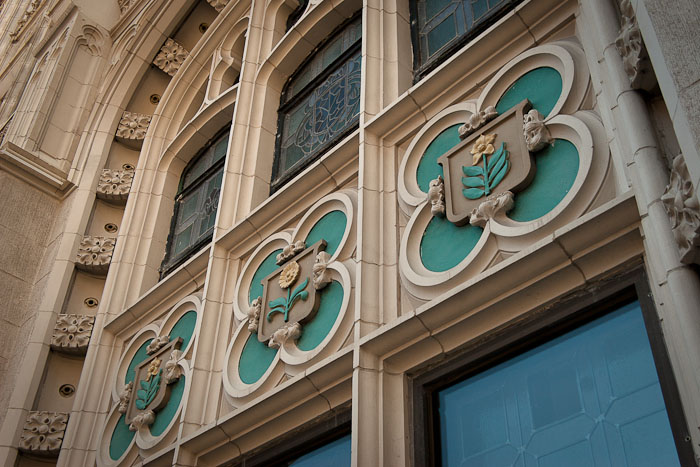 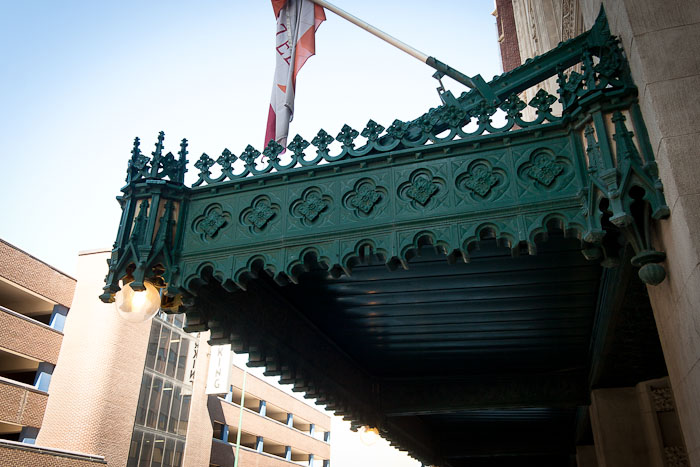 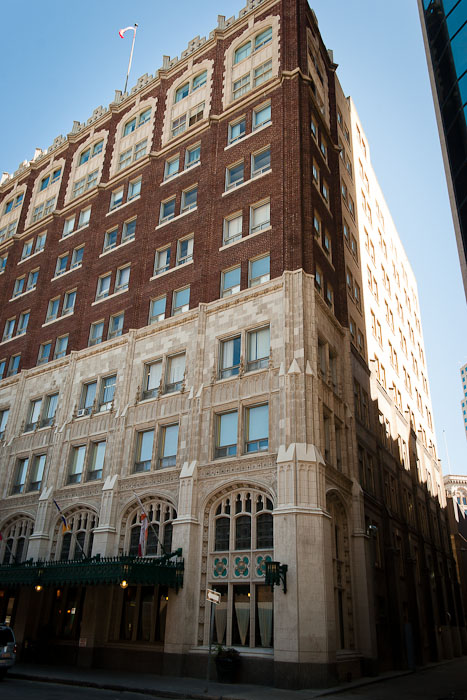 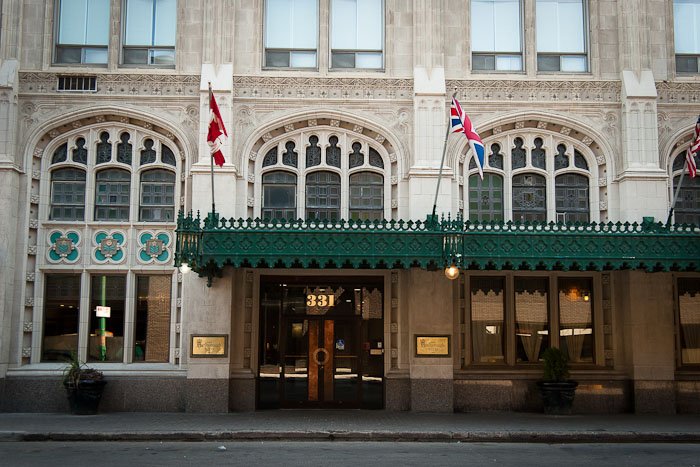 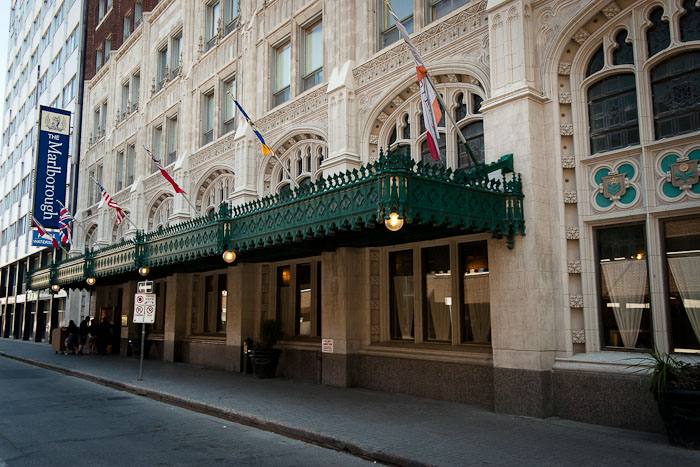 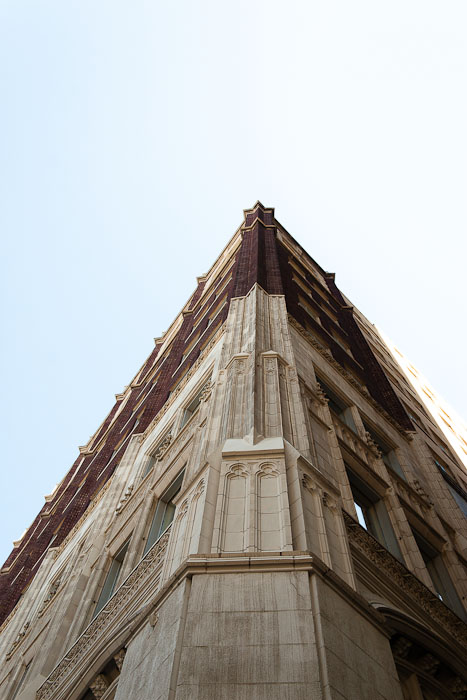 The Ramada Marlborough Hotel, located at 321 Smith Street, was built as the Olympia Hotel in 1914, designed by architect James Chisholm. The hotel was originally three storeys tall, with a six storey addition built atop this podium in the early 1920s. This addendum was constructed in accordance with the original scheme, with supervision by local architect J. H. G. Russell. Today this section remains as the south portion of the present hotel.

The Marlborough Hotel has had a varied past: two sets of owners having to close it, then used as a military barracks during the First World War. Famously, in 1925 the building played host to the conference that led to the creation of the Royal Canadian Legion. In the 1930s the hotel was purchased by a group of businessmen, the Marlborough Hotel Company, that initiated an innovative plan for the hotel in the early 1950s.

President of the Marlborough Hotel Company, Nathan Rothstein, observed a shift in hotel use emerging in the 1950s: people travelled more by car and wanted proximate access to their vehicles. As a result, a large parkade for the hotel, located across Smith Street, was planned. There was also an increased demand for services and comfort, so an addition of modern hotel rooms were similarly initiated. An old annex on the north side of the Marlborough which contained a beer parlour, had to be first demolished, clearing the way for the multi-million dollar expansion in the spring of 1956. Designed by architects Libling Michener Diamond and Associates and constructed by Bird Construction, both the new hotel annex and the eight-storey parking garage featured the latest in building technologies; the new hotel was air-conditioned and fire-protected with a sprinkler system. Radios, televisions and showers were installed in all of the 175 rooms. The ground floor and mezzanine were planned to be mixed-use, and included retail and restaurants. The guest rooms were planned along the three outside walls of the new annex to allow for ample interior light. The double height eighth floor was designed as the Skyview Ballroom, a flexible space for conventions and social events.

The exterior footprint of the Marlborough Annex is 100’ x 120’ and is 188’, or 8-storeys, in height. Where the old hotel was finished in brick and limestone, the addition is clad in brick and polished granite. The facade is separated visually into bays, and a double height crown along the parapet is mirrored in the decorative treatment at the ground floor. Rather than repeat the historicism of 1914, 40 years later, Libling Michener Diamond and Associates accepted the form and updated the construction for a contemporary look. At the same time, the addition mirrored the massing of the old structure, with a ground-floor colonnade matching the height of the first storey Gothic arches of the older structure, and the double-height Skyview space near the top of the new building likewise corresponding with the original hotel.

At the time of this renovation, many of the significant features in the interior of the original hotel were maintained, including the formal dining room, and architectural elements within the lobby. The Churchill Dining Room’s twenty-foot rib vaulted ceilings and walnut wainscoting have been preserved even through various renovations and redesigns, such as the one overseen by Winnipeg interior designer Grant Marshall in the 1980s. The neo-Gothic decoration of this older space is perhaps most dramatically revealed in the rear cocktail lounge, which features soaring Gothic spandrels, quatrefoil designs, and stained-glass windows. The entrance into the 1956 annex is funnelled through the original lobby, which has been redesigned and expanded to meet increased traffic. Off the lobby, for many years, was the entrance to the Winnipeg Press Club, the oldest such institution in Canada.

Despite renovations to the ground floor space over the years (1956 and 1973 in particular), the Marlborough has been subject to economic swings. Part of the hotel was planned to be converted to a seniors complex, which proved unviable. The Hespler centre and the Marlborough Hotel closed on August 25, 1992. Shortly thereafter the Ramada Inn chain purchased the hotel, maintained the stalwart commercial infrastructure, and updated the annex guest rooms. The building was renamed the Ramada Marlborough Hotel. In 2004 the hotel acquired the adjacent Garrick Theatre which it renovated to hold a performance theatre, pool and waterslide complex. In 2013 $500,000 was spent to repair the facades of the 1956 addition and on new ornamental lighting and signage set on this space.