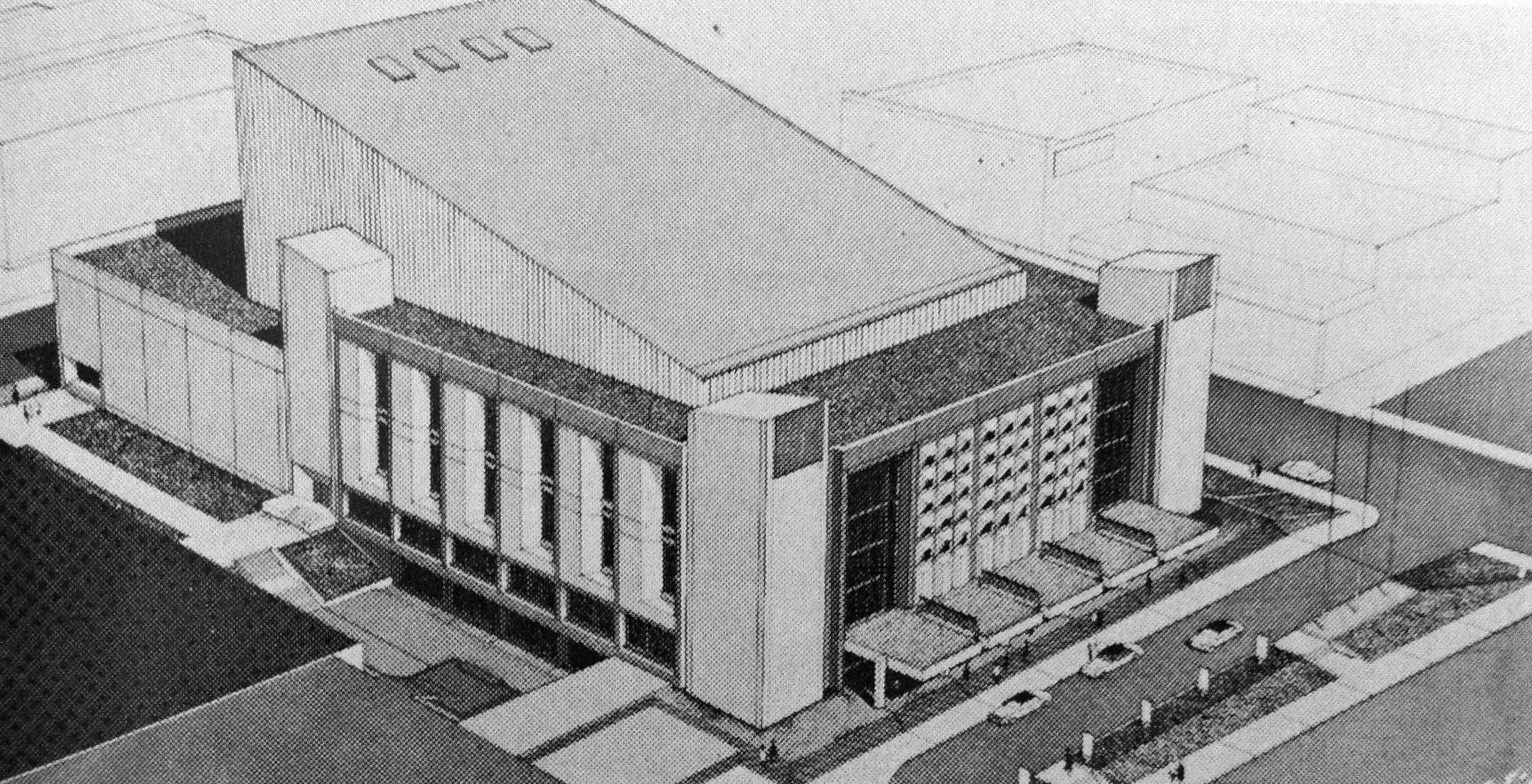 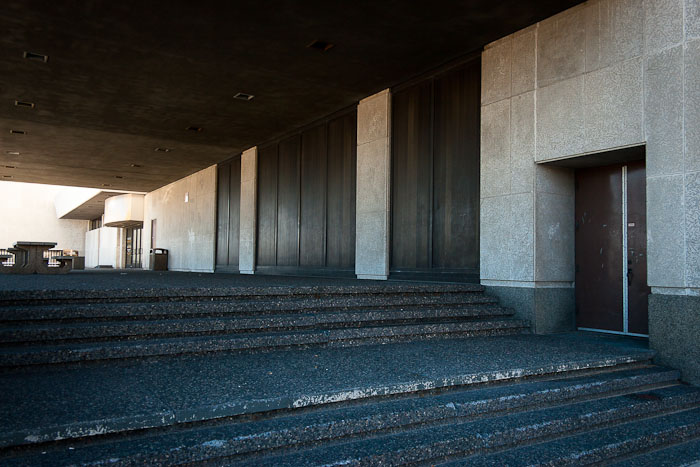 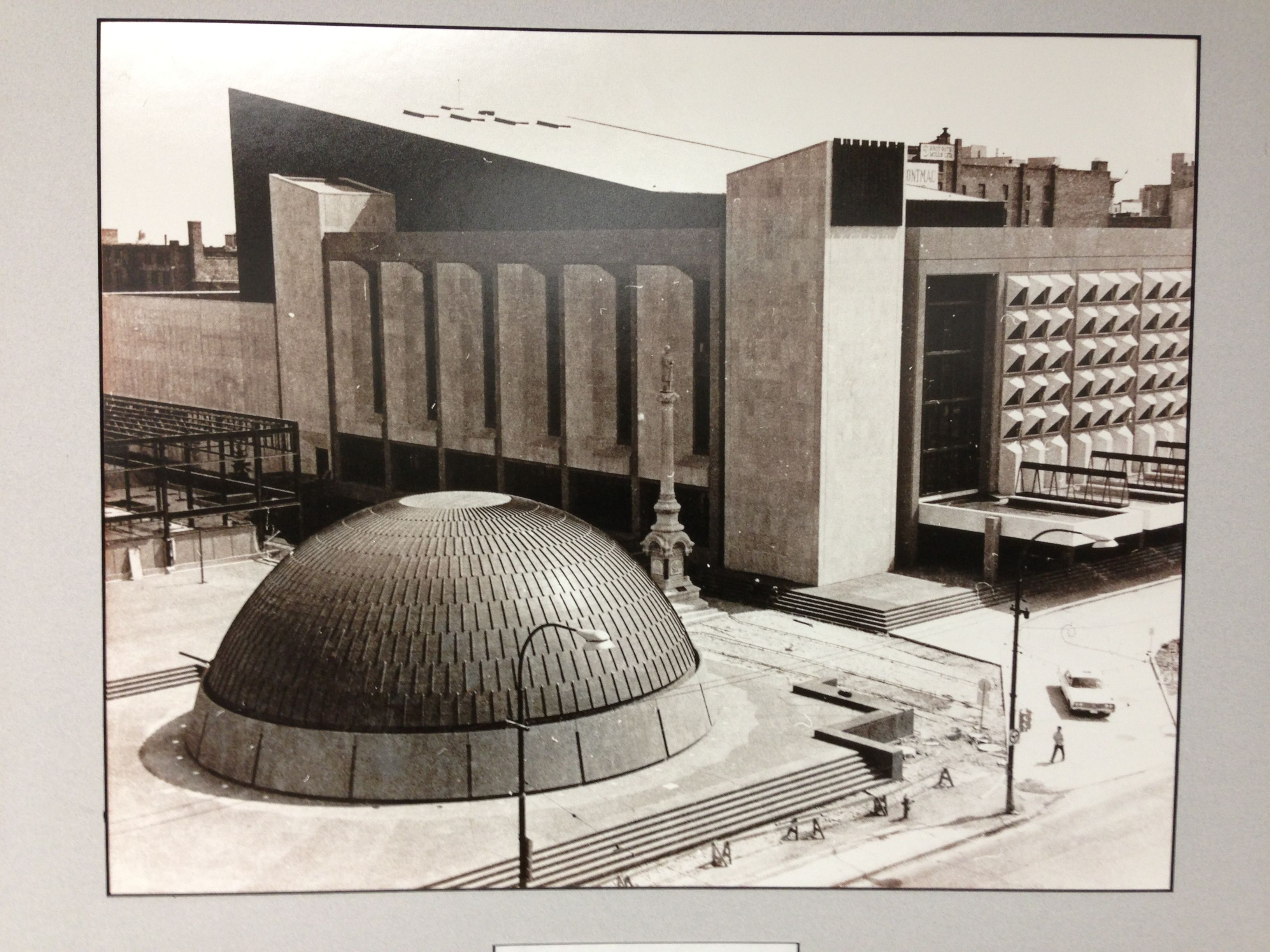 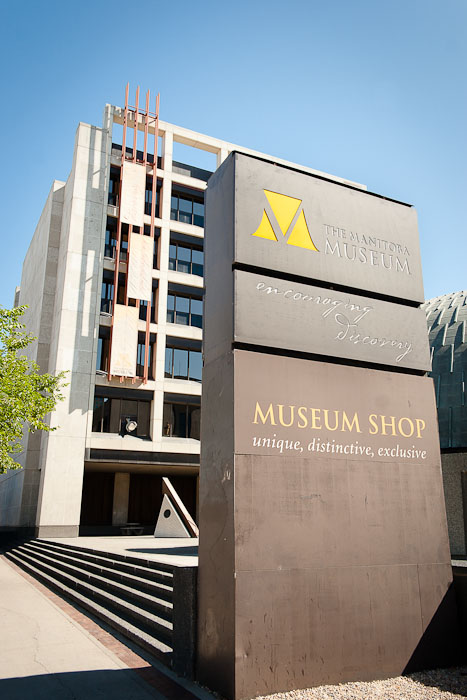 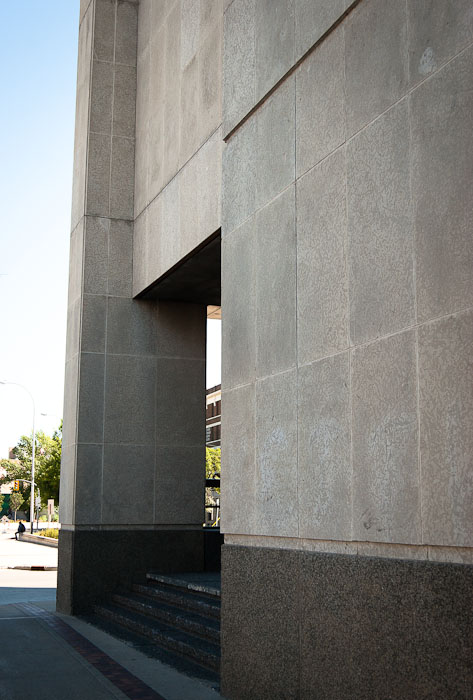 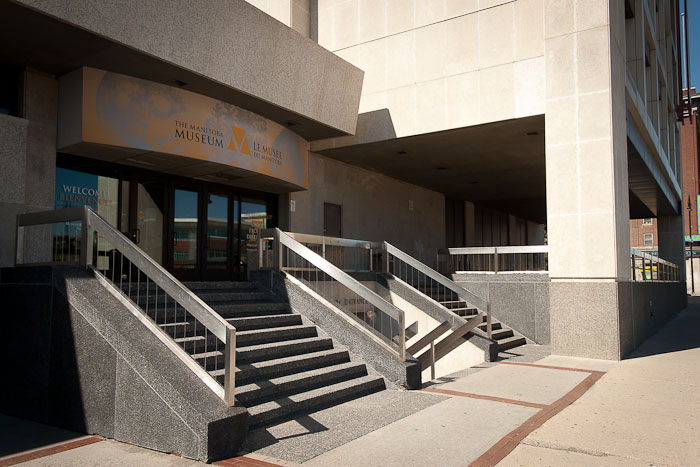 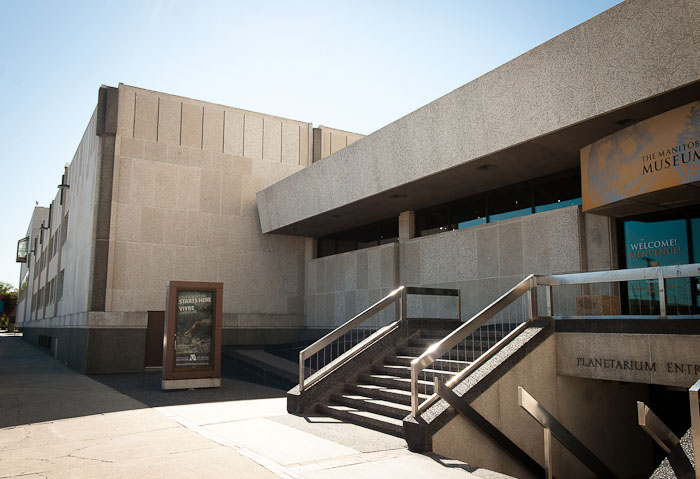 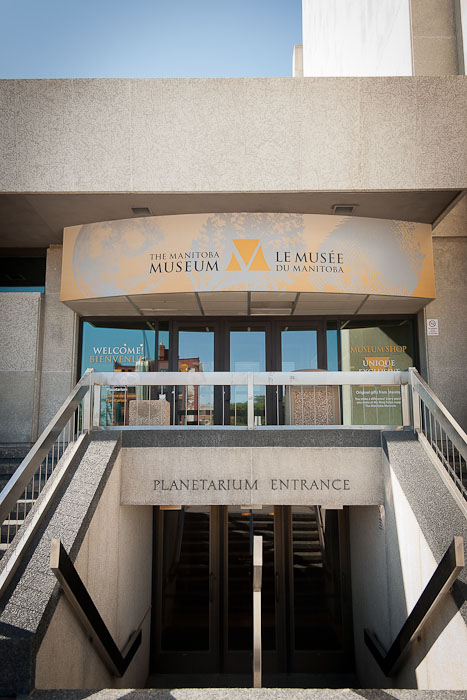 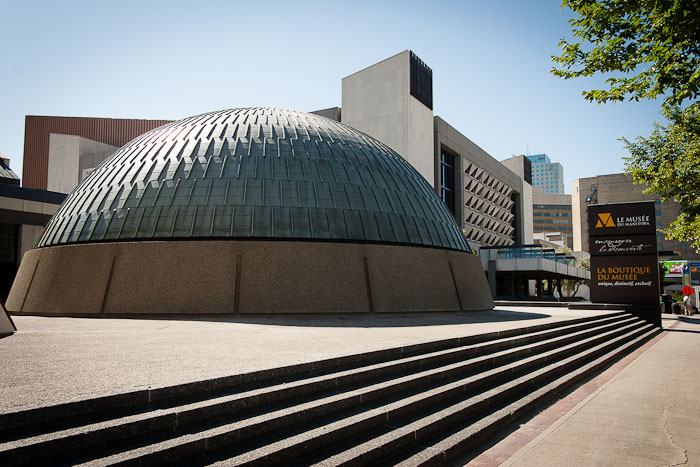 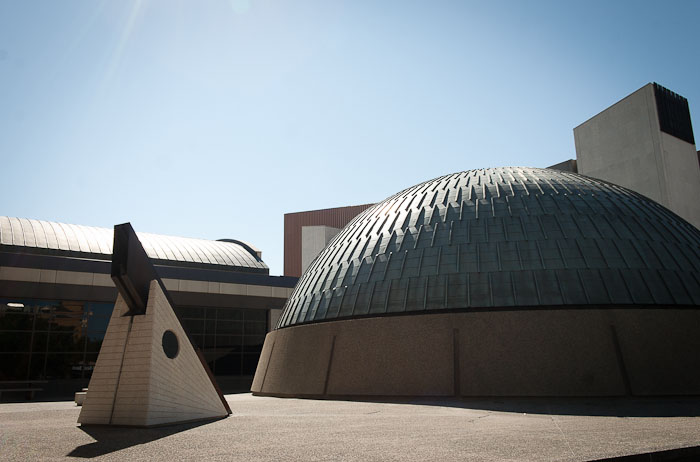 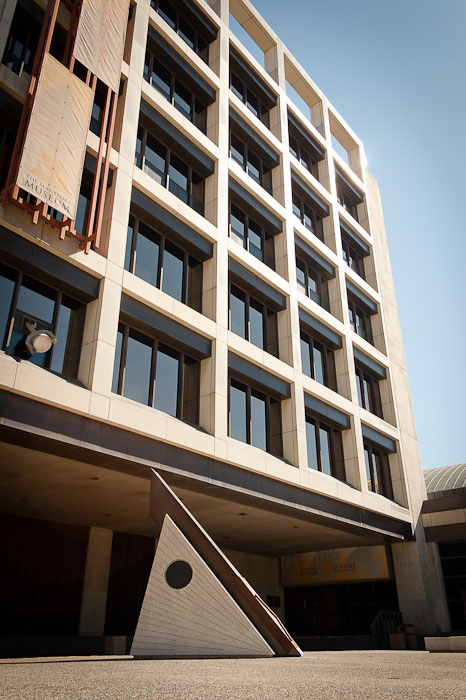 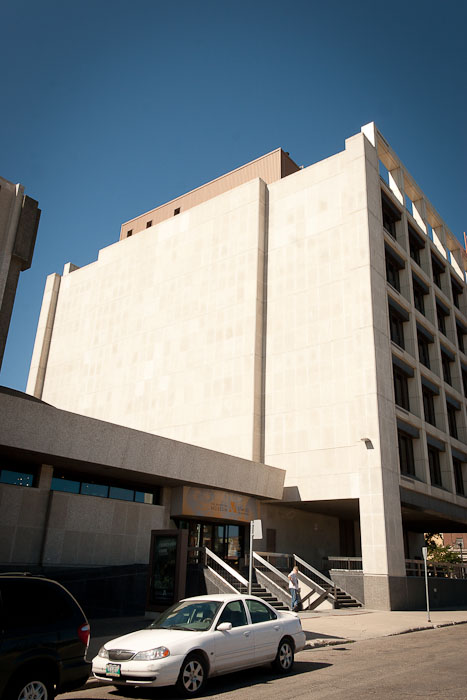 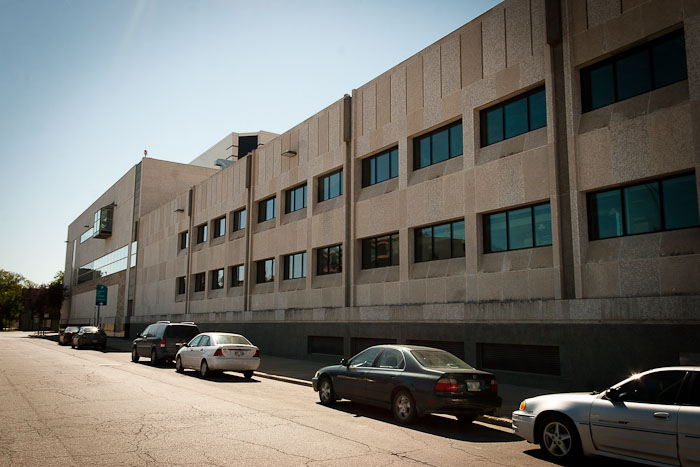 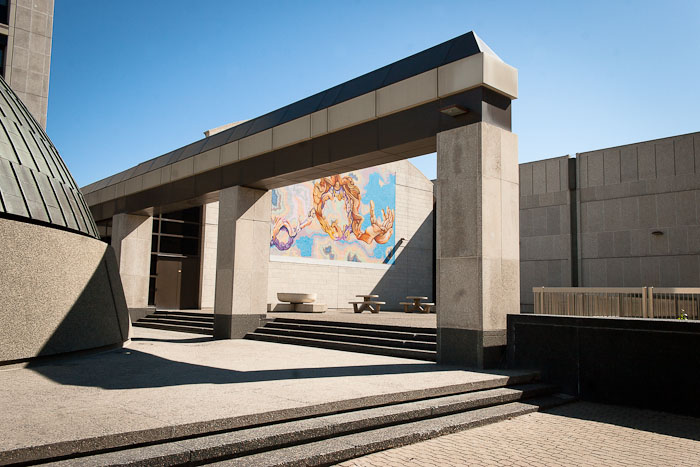 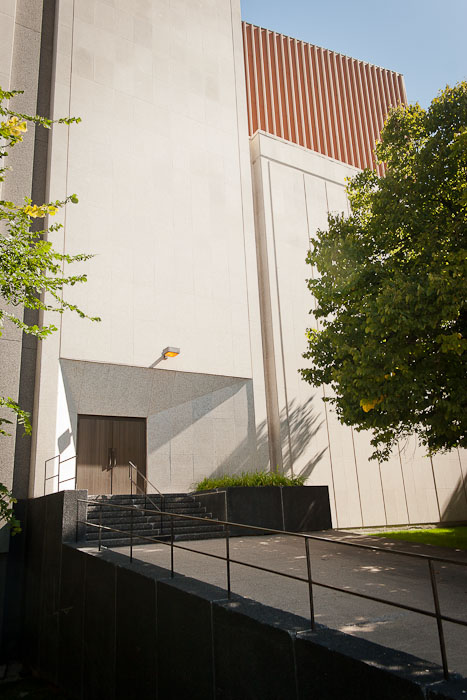 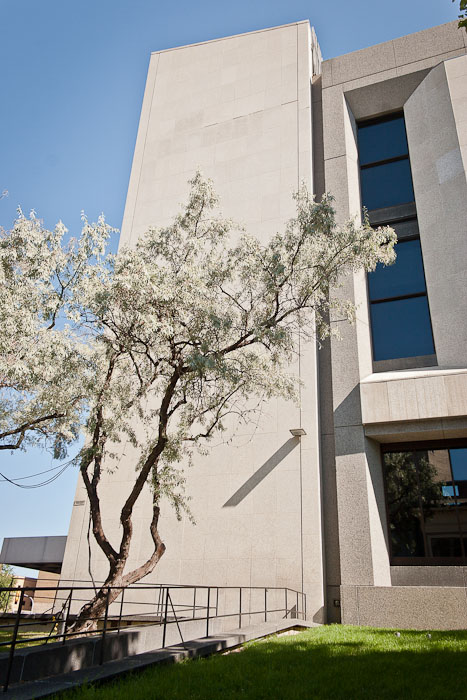 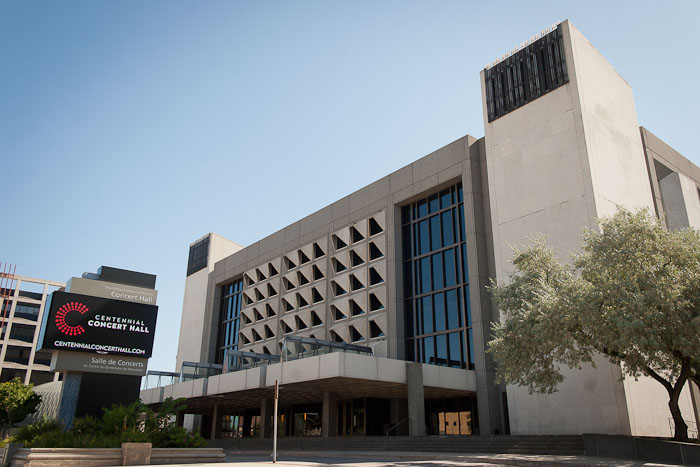 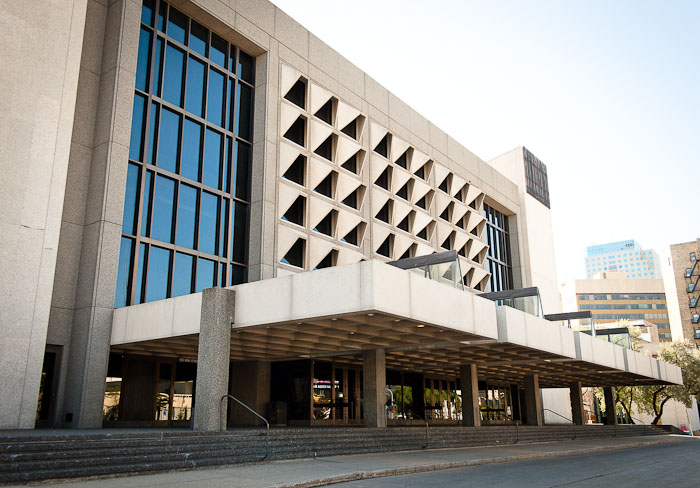 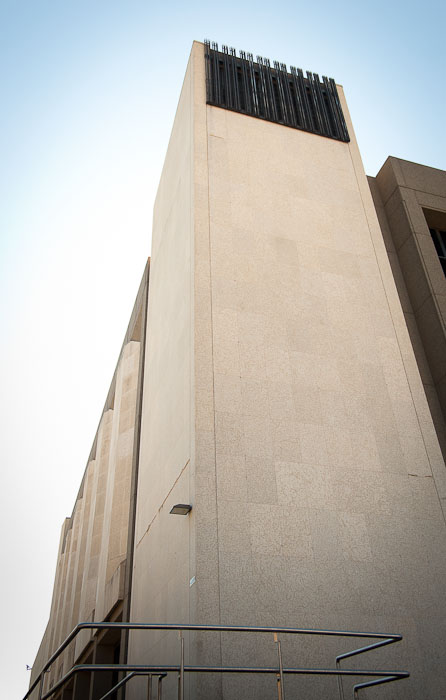 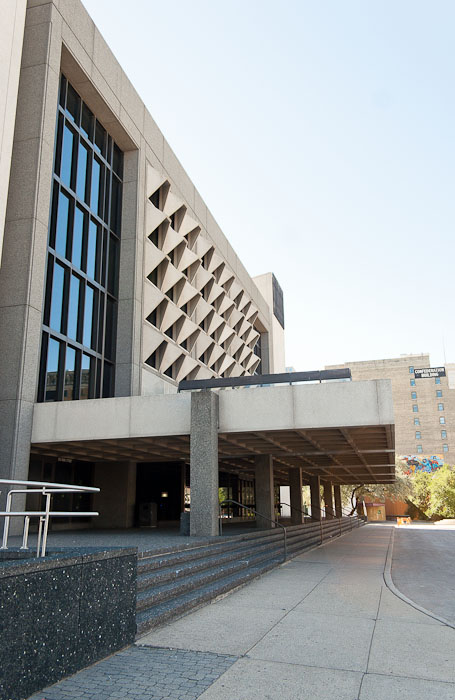 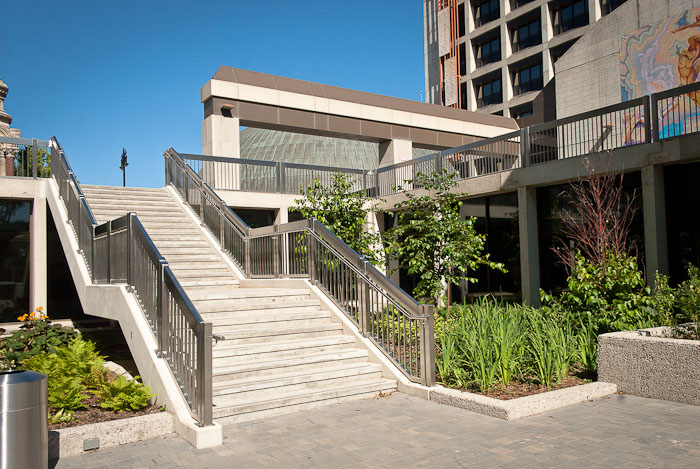 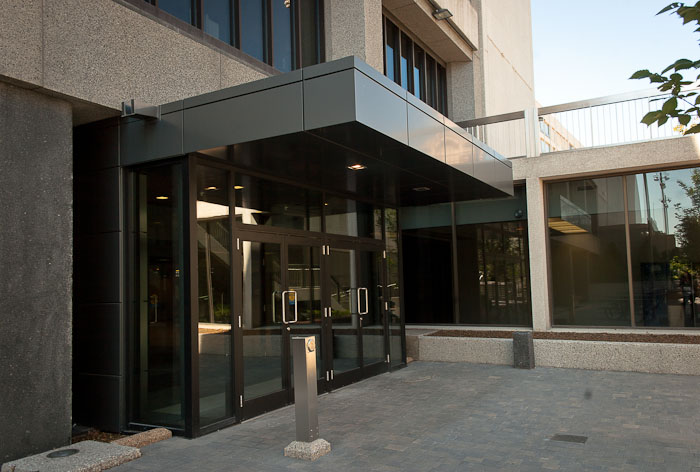 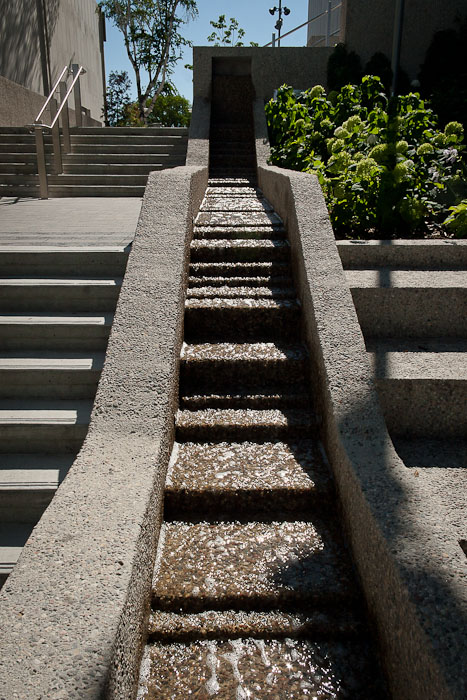 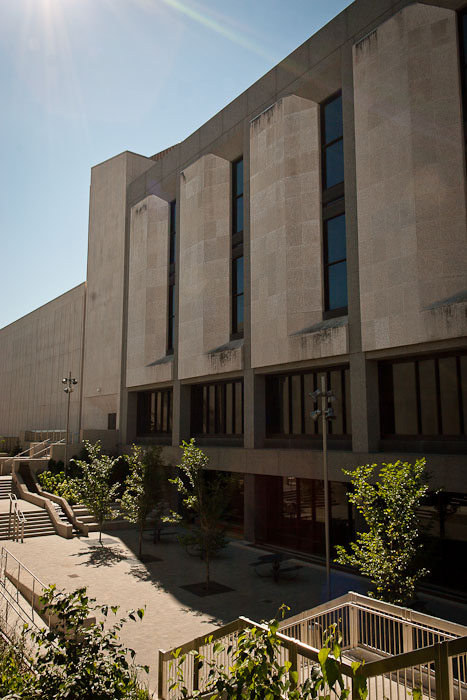 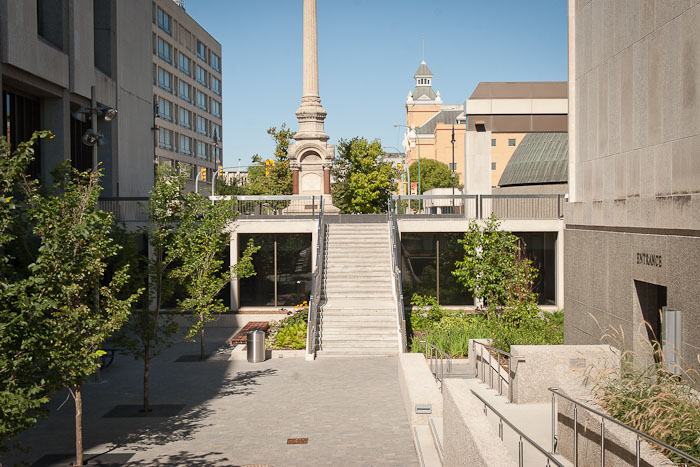 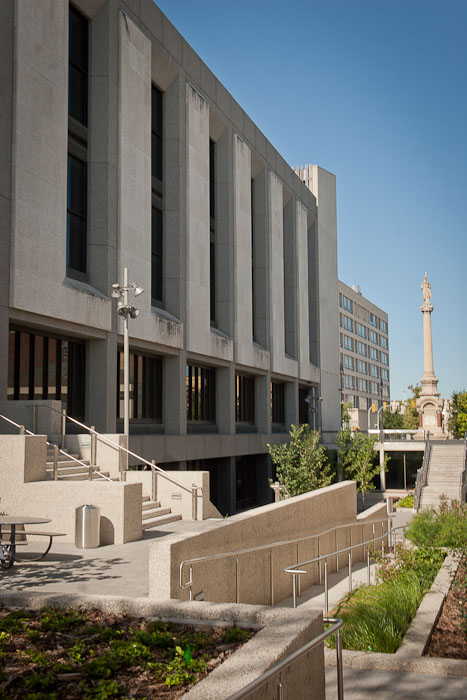 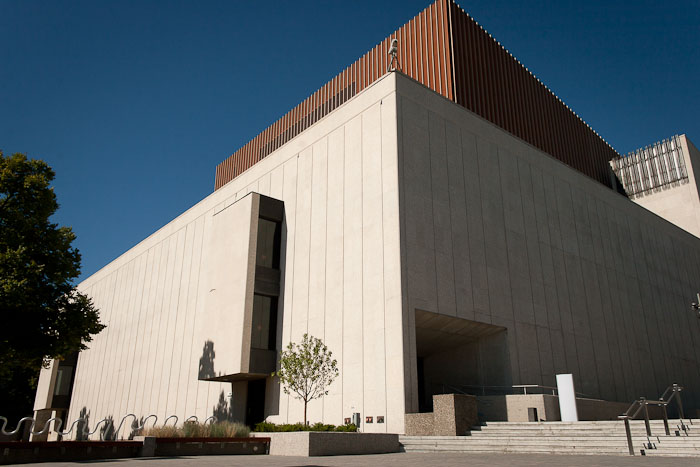 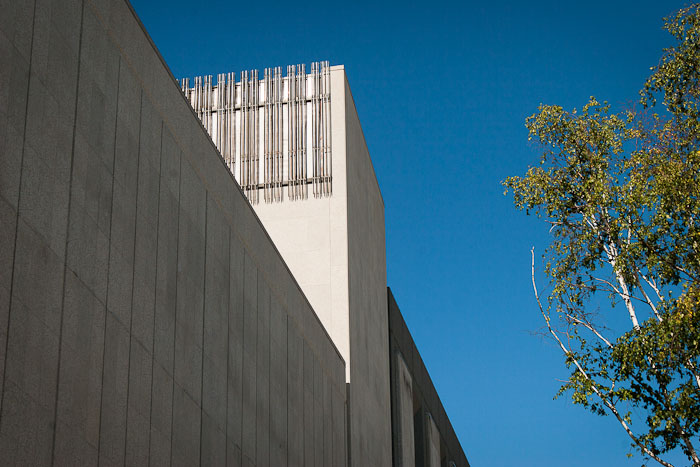 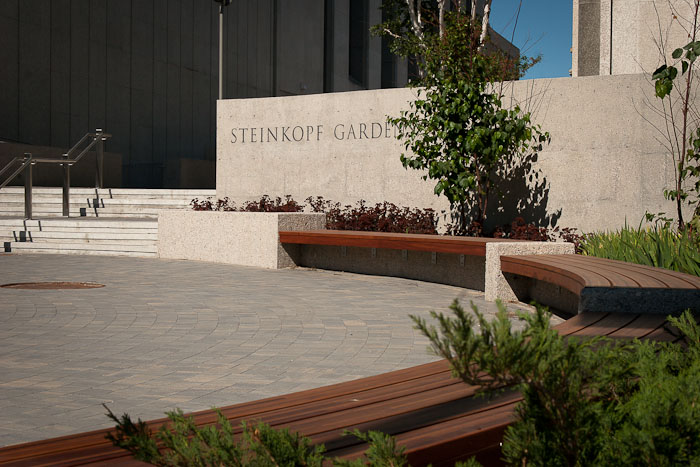 This 2,305-seat venue is the primary home of the Winnipeg Symphony Orchestra. In a typical year, the symphony (established in 1947) plays more than 80 concerts at the Hall for approximately 100,000 audience members. The building hosts a number of other acts, including performances by the Royal Winnipeg Ballet.

The exterior design presents a balance of orthogonal lines and angles, glass and masonry, light cream and dark charcoal tones. The building’s colouration complements and parallels those of the Winnipeg City Hall across the street—which also features Tyndall stone and deep-grey masonry.

As viewed from Main Street, the Concert Hall’s entry facade is compelling. This elevation is anchored on its north and south ends by two tall Tyndall stone towers which project above the roof-line. A focal point of the facade is a set of 45 eyelid-like concrete window covers. These unique, sun-shading awnings, with their origami-like folds, exploit the plastic possibilities of concrete by means of linked sections of pre-cast material. Flanking this section are two enormous three-storey windows, which cast light upon the dramatic multi-level floating staircases inside. The entrance to the building is sheltered by a large five-section canopy built of a cream-toned concrete matching the awnings above. The canopy is suspended by six inconspicuous columns which lend it a floating quality. The glass pyramids atop the canopy add an energetic rhythm to the overall structure.

The north and south sides of the Concert Hall—along the Steinkopf Gardens and Market Avenue—continue the main facade’s use of dark grey and cream-toned materials. The ground level features large windows that link the interior corridors to the urban exterior. Pilasters continue from this level to the top of the building, holding between them two-storey windows cradled on their sides by Tyndall stone frames which angle inward. The tower-like forms which bookend the Main Street elevation are repeated near the rear of the building; the angled roof-line here parallels that of the theatre itself. The back section of the building, which holds the stage and associated areas, is clad in Tyndall stone and is capped with the hall’s striking, copper-coloured, angled roof.

The grand entry hall, accessed through a glazed vestibule, features dark-grey-tiled floors that anchor a soaring multi-storey lobby. Rising dramatically at the north and south are four white, floating staircases. These connect the ground floor to six theatre-entry corridors as well as a piano nobile level overlooking the central foyer. Suspended from the ceiling of this space are three immense chandeliers, made of a profusion of metal threads holding large pieces of polished Norwegian crystal. The lower, outward-facing wall of the lobby bears a substantial ceramic mural by artist Greta Dale that depicts the arts of dance, music and drama. Two murals by artist Tony Tascona are also found at the west end of the orchestra level corridors. These works, which were selected in a national competition, are of painted aluminium—a technique the artist developed through his work as an electroplating technician. In addition, giant abstract wall hangings by prominent Canadian artists Kenneth Lochhead and Takao Tanabe are located at either end of the main lobby.

Beyond the lobby the building is carpeted in deep red; the corridors are also complemented by distinctive undulating chestnut-toned wood walls, which hold curved entry portals. The theatre has a proscenium stage 24 metres wide, 12 metres deep and over 33 metres tall which can accommodate a full orchestra and a choir of 700. Beyond the large orchestra level, this space contains two balconies and two loges, all clad in white stucco. The plan of this performance hall is remarkable in its “continental” seating arrangement involving a lack of aisles and view-obscuring columns. Theatre consultant George C. Izenour, of New York, contributed to the design of this space, and the acoustic engineering was by the firm of Bolt, Beranek & Newman Inc., also of New York. At the time of the Concert Hall’s construction, the acoustics were considered to be the finest of any such theatre in North America.