Étienne Gaboury has been described as the “father of landmarks,” “Mr. Church,” “an architect as an artist” and “Manitoba’s greatest architect.” Perhaps more than any other architect in the province, Gaboury has gained enormous attention as someone whose work consciously attempts to communicate the intricacies of regional character and who has shaped the way Manitobans view themselves.

Gaboury was born to a large family on a farm near Bruxelles, Manitoba, on April 24, 1930. He completed a Bachelor of Arts (Latin-Philosophy) at College St. Boniface in 1953, followed by a Bachelor of Architecture at the University of Manitoba in 1958. Gaboury received a post-graduate fellowship from the French government in 1958, and attended the École des Beaux-Arts in Paris for one year of study. He also travelled extensively throughout Europe. Gaboury then returned to Winnipeg where he began a brief contract with the firm of Waisman and Ross. This period was followed by a short stint working with architect André Govin before Gaboury joined the office of Libling Michener and Associates for a two-year apprenticeship.

During his stay in France, Gaboury made a pilgrimage out of Paris to see the new Chapel of Notre Dame du Haut in Ronchamp (the old church had been bombed during the Second World War). There, in 1954, the famous early modernist architect Le Corbusier had designed a new chapel in an Expressionistic style, which set the course for a move away from a strict International Style modern architecture. Facing this curving upswept form, provocative roofline and joyful, idiosyncratic interior, Gaboury was profoundly moved by what he found to be the spiritual impact of the design. For him, inspiration and devotion came together in this sparse yet beautiful space. The intense impact that Le Corbusier’s work at Ronchamp had on Gaboury would be evident throughout this prominent Manitoban’s career.

Upon returning to Canada from his two years abroad, Gaboury designed the chapel of St. Louis le Roi for Libling Michener (610 Rue Laflèche). The work won the firm a gold medal in the Massey Awards for Architecture and launched the young architect’s specialization in religious design. Another significant work of the time was the Manitoba Health Service Building (599 Empress Street, 1959). This low-slung office block represents Gaboury’s mastery of International Style architecture; a key feature in this regard is the enclosing of the structure in brise-soleil – light-diffusing shutters that were a trademark of such modernist architects as Le Corbusier.

On March 7, 1961 Gaboury registered with the Manitoba Association of Architects. His first solo commission was a new church for his home parish of St. Claude, Manitoba. Gaboury’s practice became somewhat of a family affair; his brother Adrien managed the new office, which consisted of a specification writer, a job supervisor, a designer, an engineer and a small group of young architects. Not long after setting out on his own, Gaboury purchased and renovated an old retreat house chapel on Rue Langevin in St. Boniface. Here he retained the somewhat Gothic building form, but remade the look with the admission of light through the new skylights, windows and improved circulation. All of these features would become consistent themes in Gaboury’s work.

This building gave the practice a profile in the very centre of old St. Boniface and led directly to it being awarded the commission for the new St. Boniface Civic Centre and Health Unit. This set of buildings would flank the 1906 Hôtel de Ville (by architect Victor Horwood) on Provencher Boulevard. Completed in 1965, the complex as a whole took the form of an integrated plan to be constructed in three phases. A massing of diverse shapes serve separate functions as a police station, jail, garage, courthouse, administrative offices and multi-use health clinic. The overall theme and limestone veneer gather the shapes and create a distinct identity. At the same time, the influence of Gaboury’s visit to Ronchamp is evident from such details as the rich variety of window shapes, their scattered and imaginative placement throughout the masonry facades and the creative and directed manipulation of light in such details as the illumination of aspects of the courthouse.

Another acclaimed structure by Gaboury in this period was his 1963 Church of the Holy Martyrs in Windsor Park. There, sculptural forms enclose intimate sacred spaces lit by irregularly shaped stained-glass windows and masonry construction. All four of these buildings – the two churches, the civic centre and the office – were nominated for Massey Awards in 1964, an auspicious launch to a new architectural practice and a portend of the future.

Gaboury followed this success with numerous commissions for churches, St. Norbert Collegiate, a school complex in Nelson House and residential projects such as 2 Valley View Drive – a home that won the architect the Canadian Home Journal’s Centennial Awards for Residential Design gold medal. A frame and stucco dwelling, modest in scale and costing only $35,000 to construct, the Centennial Home was pure Gaboury: varying roofline, windows raised to track winter sun and direct radiant heat into private spaces, a dramatic entrance and a flowing layout.

Another unique assignment came in 1969: the design of a plaza at the corner of Corydon Avenue and Osborne Street (better known in Winnipeg as “Confusion Corner”). Gaboury’s solution took advantage of the plasticity of concrete to create a sculptural, almost stage-set like space reminiscent of ancient masonry ruins. Metro Plaza – which was quickly nicknamed the “bearpit” – would later be filled in by the River Osborne Community Centre, but its largest vertical element, two interlinked Brutalist panels remain as a reminder of this larger scheme. This same interest in the possibilities of concrete would appear in Gaboury’s 1966 design for Blessed Sacrement Church (710 Roanoke Street), where the combination of triangular roofline, respect for materials and inspired lighting prefigure what would become known as Gaboury’s most famous work: 1967‘s l’Église de Précieux Sang (Precious Blood Church).

Précieux Sang (200 Kenny Street) presents a circular plan of curving brick walls topped by a tall spiralling, corkscrew, shingled roof. The interior – dominated by warm tones, enormous interlocking wood beams and dramatic natural lighting – has been often compared to a tipi. The building was described by architect Ron Thom as “an outstanding example of Canadian regionalism.” The story of the congregation’s acceptance of the remarkable design is in itself quite interesting: Gaboury and his partner Denis Lussier presented the detailed conceptual drawings at a night-time meeting of volunteer parishioners. Beer was served, and one member spilled a drink on the drawings, ruining them. Then another committee member rushed through the door, late for the meeting, and crushed the delicate model stored there. Gaboury noted: “I have a feeling that had they not spilt the beer and broken our model, we might not have had an approval” that night. Construction proceeded and the twisting roof form swirled up from its low brick walls, with stained-glassed windows concealed in the top spiral section: “the rapture of the unexpected,” commented the architect. This uniqueness led architectural historian Harold Kalman to call Précieux Sang “entirely Canadian,” a site where Gaboury turned away from rationalist principles to create “space, form and light, to evoke a strongly visceral relation.”

At the same time as Gaboury was engaged in this diversity of projects, the architect maintained a busy schedule of writing, lecturing, participation in competition juries, studio critique at the University of Manitoba School of Architecture, and committee work for the Societé Franco-Manitobain and the Architecture Advisory Committee to Montreal’s Expo ’67. This frenetic pace continued into the late 1960s and 1970s. When, in 1968, the St. Boniface Cathedral suffered extensive damage from a fire, it was Gaboury who decided to save the ruins and build within them. “We’re not trying to reconstruct the old church, we have these ruins, the burning is part of the church history and from these a new cathedral arises,” he observed. Nestled within the roofless stone walls, a smaller modern cathedral was inserted, with a forecourt that is lit up when the low winter sun beams through the former rose window of the old cathedral. This court space – open yet contained – ties the old with the new to create something greater than the sum of its parts. The redevelopment of the cathedral won the Heritage Canada Award in 1985. One of Gaboury’s crowning achievements in his own view, however, was receiving the Manitoba Historical Society Centennial Medal of Honour for his contributions to the province in the field of church architecture.

In 1968 Gaboury also designed and constructed his own residence at 90 River Road in St. Vital. This wooden house embodied his design philosophy, with bold lines, visually stimulating materials, windows and a layout that matches function with the path of the sun, creating an intimate, thoughtful interior space. In the architect’s own words, architecture is space structured for human needs, where the utilitarian aspects should not diminish the artistic dimensions. “What is human is not necessarily physical, but spiritual…that other dimension, which is the realm of the spirit…of art.” This overlapping of art and architecture is also evident in what was one of Gaboury’s most visible projects – a monument celebrating Métis leader and Manitoba political pioneer Louis Riel. This work, unveiled on December 31, 1971, stood on the Manitoba Legislative grounds until protests forced its removal in 1994. Gaboury’s contribution to the scheme, which contained a sculpture by Marcien Lemay in which Riel was depicted seemingly nude and disfigured by torment, consisted of a broken, textured concrete cylinder (reminiscent of the concrete slab art of Metro Plaza) encapsulating the conflicted central form. The piece now stands at Collège universitaire de Saint-Boniface (200 Rue de la Cathédrale), not far from Riel’s tomb at St. Boniface Cathedral.

The sculpture would not be Gaboury’s last effort in creating a local landmark. In 1975, the architect was commissioned to design the new Winnipeg site of the Royal Canadian Mint. Throughout the design stage – at the insistence of the Master of the Mint and that of the architect – the concept of this building would evolve from a relatively taciturn, inward-looking institution into a public place and a tourist attraction where people could see the manufacture of coins even as security was strictly maintained. The structure’s bold form, clad in copper-colored reflective glass panels, recalls the upward, triangular thrust of Précieux Sang and Blessed Sacrament Church, but with a shimmering treatment that was a departure for its designer. The interior, however, bears through with details that are distinctly Gaboury: an interior courtyard features filtered light on a garden and pond, and escalators circulate tourists around a corridor replete with glancing Manitoba light. Opened April 30, 1976, the Mint rests on a huge, flat site that enhances the impact of the complex’s prairie setting.

Gaboury’s practice has evolved from its origins in an old retreat house. His early partner Denis Lussier passed away while young. In the early 1970s the firm added Frank Sigurdson as a partner. Currently, the firm of Gaboury Prefontaine and Perry Architects operates from offices on Edmonton Street. The architect’s work has been the subject of several exhibitions – five in the 1980s alone. The largest and most recent exhibition of Gaboury’s design was a 1996 tribute called “Art and Architecture: The Work of Étienne Gaboury” at the Centre Cultural Franco-Mantobain, launched by curator Denise Prefontaine. Gaboury was given a Life Membership to the Manitoba Association of Architects in 2010. 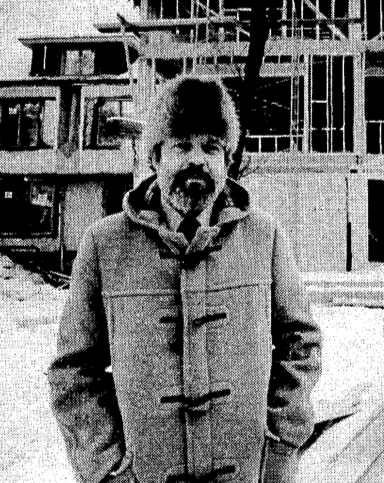