George Stewart was born in Boissevain, Manitoba and was the son of a United Church minister, Reverend J. F. Stewart. George graduated with a Bachelor's degree in Architecture from the University of Manitoba in 1948. He was awarded, among other prizes, the Manitoba Association of Architects (MAA) Scholarship and the Ralph Hamm Memorial Scholarship. After graduation, he established his own practice which he ran until 1970.

From 1970-1982, George Stewart, worked as the Director of the University of Manitoba, Physical Planning and Design Office. During this time, he designed the Ellis Building, renovated the Buller Biological Laboratories and oversaw the design and construction of several new buildings.

Stewart served on the Manitoba Association of Architects (MAA) Council and as MAA President (1958). As well he served on numerous committees of the Royal Architectural Institute of Canada (RAIC). He was appointed as a Fellow of the RAIC in 1966. In 1965, he was appointed to the Winnipeg Better Housing Commission.

George Stewart had a particular interest in community public libraries which led to commissions for both the St. Vital and the Fort Garry branches. 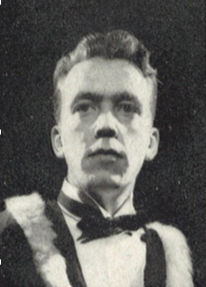