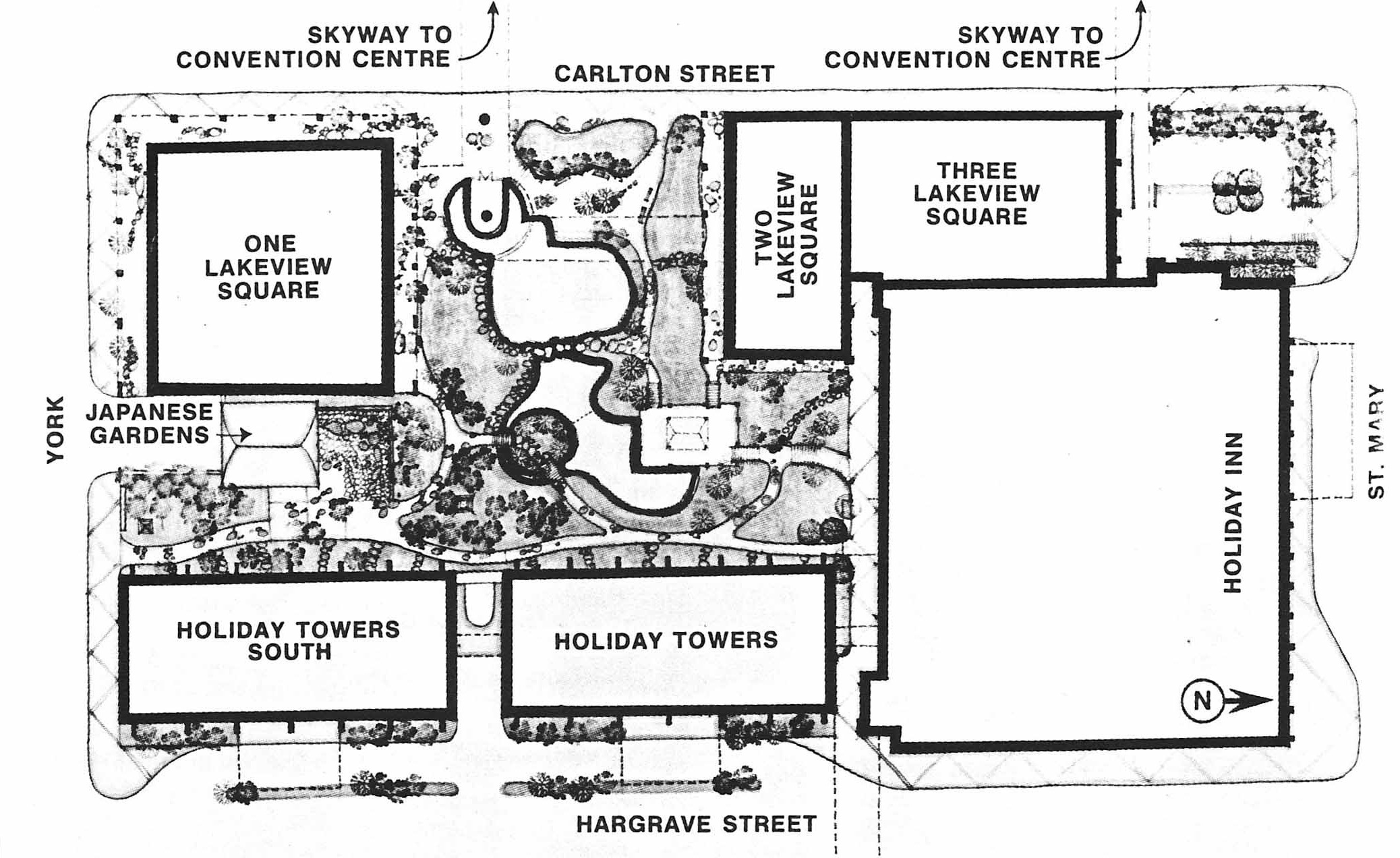 In the early to mid-1970s, a planned unit development (or planned building group) known as Lakeview Square was constructed in the block of land bound by St. Mary and York avenues, and Carleton and Hargrave streets. At the time, it represented the largest commercial development in Winnipeg's downtown and included both residential and commercial properties: the Holiday Inn, three office buildings, a Japanese garden and two Holiday Towers apartment blocks. Developed and managed by Lakeview Properties Ltd., under the guidance of then president Jack Levit, the Lakeview Square was the first complex built as part of the Metropolitan Corporation of Winnipeg's $40-million Downtown Development Plan. This plan, much of which it still in operation, covers a 14-block area in the heart of Winnipeg’s downtown. The development, with construction spanning over 10 years, was initiated as a co-operative project shared between the public and private sectors. Winnipeg Chamber of Commerce President, Les Wardrop, stated that the development would herald a new era of vitality for the downtown core: “[T]he national trend has been a movement away from the city centre to the convenience of the suburban shopping centre. Winnipeg’s Downtown Development Plan will draw the population back to the downtown area where they can enjoy a larger scope in choice of merchandise and the many public recreational activities that are planned.” (Manitoba -- Canada’s Number One Sun, October 1970)

The entirety of Lakeview Complex, designed to be a community within itself, offering “maximum opportunity to live, work, play and relax without the problems of traffic jams and rush hours,” are interconnected by a series of climate-controlled walkways, 16’ above grade and are similarly linked via an underground concourse. This skywalk system also extends to the Winnipeg Convention Centre, a key component in the aforementioned Downtown Development Plan. All buildings overlook a central Japanese Hayashi Garden courtyard with reflecting pools, stone lanterns, formal flower beds, and an authentic Japanese Tea House.

Lakeview Properties Ltd. continued to develop both York Centre and Rupertsland Square, a joint undertaking with the Hudson’s Bay Company and The Cadillac Fairview Corporation Limited.