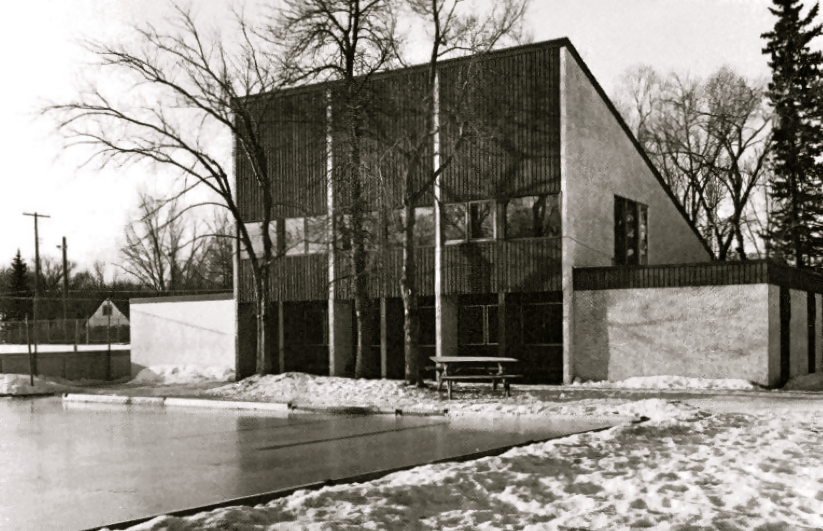 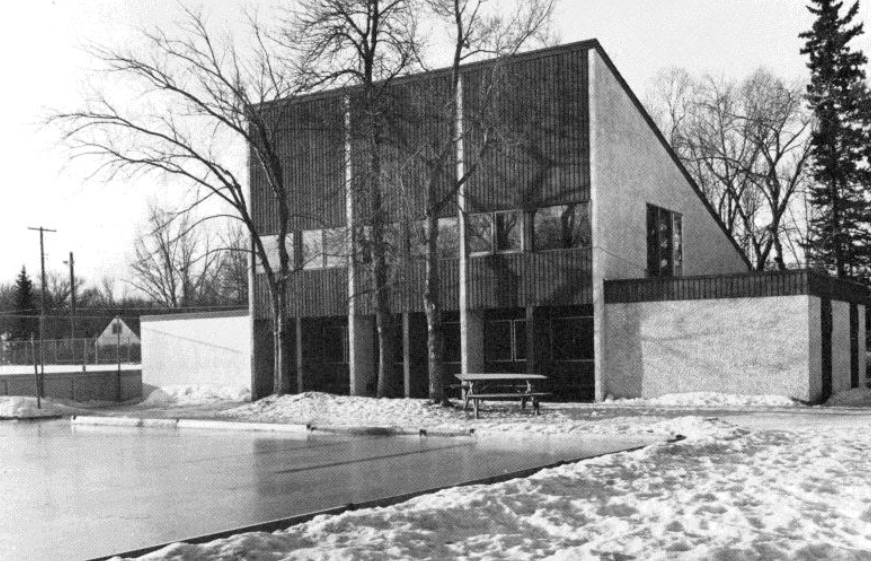 Professionals from within Wildwood Park collaborated to design and manage the construction of this community centre in 1974. Among the architects were Eric Lye, Carl Nelson (who served as project manager) and Chris Kaufman. Dave Witty was responsible for the landscape architecture of the project with Bill Milley handling structural design and Harold Cawker undertaking the heating and plumbing work. The building features an relaxed and pastoral modernist aesthetic featuring wood and stucco cladding and pitched roofs.

Wildwood is a neighbourhood that resembles few others on earth. Tucked onto a peninsular point of land hugged on three sides by the Red River, this residential district stands apart from the rest of the city in a number of ways. Among the most prominent is the uncommon arrangement of its roadways. Rather than fronting onto streets, the homes in the area (which are set on 10 bays) face park-like spaces traversed by sidewalks. Vehicular access is gained via rear alleyways. The scheme, somewhat utopian in ambition, is the remarkable consequence of a twentieth century inclination toward blending home and nature. This was a trend that began to deeply affect suburban building in the nineteenth century. The specific model for Wildwood was Radburn, New Jersey, an area developed according to similar principles in the late 1920s and 1930s. Of the Radburn model period accounts stated that this orientation and plan “represents the first scientific effort that has ever been made to establish a community designed exclusively to minimise the danger of automobile accidents. Yet there were other things to consider too. Builders wanted to create not only a [safe] community but one “of beauty in appearance and the utmost of modern efficiency.” (The American Architect, January 1930).

The connection between Radburn and Wildwood arose from somewhat circumstantial events. Hubert J. Bird, of the Western Canadian development and construction firm Bird Construction, is reported to have flown over Radburn while visiting New York, thereby gaining the inspiration for the area he was erecting in Winnipeg. Aiding Bird in the creation of this new district was the passage of the federal National Housing Act, passed to speed the construction of homes in a booming post-war era. To build Wildwood, in 1945 Bird purchased 74.7 acres of land from the Rural Municipality of Fort Garry (at a reputed cost of $15,000). To design the area he hired the local and pioneering architectural firm Green Blankstein and Russell. Federal housing authorities said of the plans created: “The result should be extremely interesting, attractive and utilitarian,” while recommending the incorporation of the bays found at present, versus the initially suggested hammerhead cul-de-sac lanes.

During the building process Bird spearheaded several new construction methods, including elements modelled on assembly-line techniques; accounts indicate that the adoption of pre-fabrication practices led to the assembly of three houses being put together per day.

At the same time, effort was made to conserve area forests. Stevenson Real Estate first marketed homes in the neighbourhood, which sold quickly. A number of the area’s homes were built and inhabited by architects and architecture professors, many in a modernist idiom which had only just started gaining traction in Canada during the early post-war years.

Prior to this wave of 1940s construction, Wildwood was home to the Trew family, who maintained a residence as of 1907 near the intersection of Oakenwald Avenue and North Drive, adjacent to the Red River. Plans for suburban development began during this era, with a gridded street plan put forward in 1912, initiated by Colonel R. M. Thomson. An important part in the area’s history was played by St. John’s-Ravenscourt School, which was moved to this section of the city by Colonel Thomson’s nephew, Norman Young, one-time Ravenscourt headmaster in 1934.