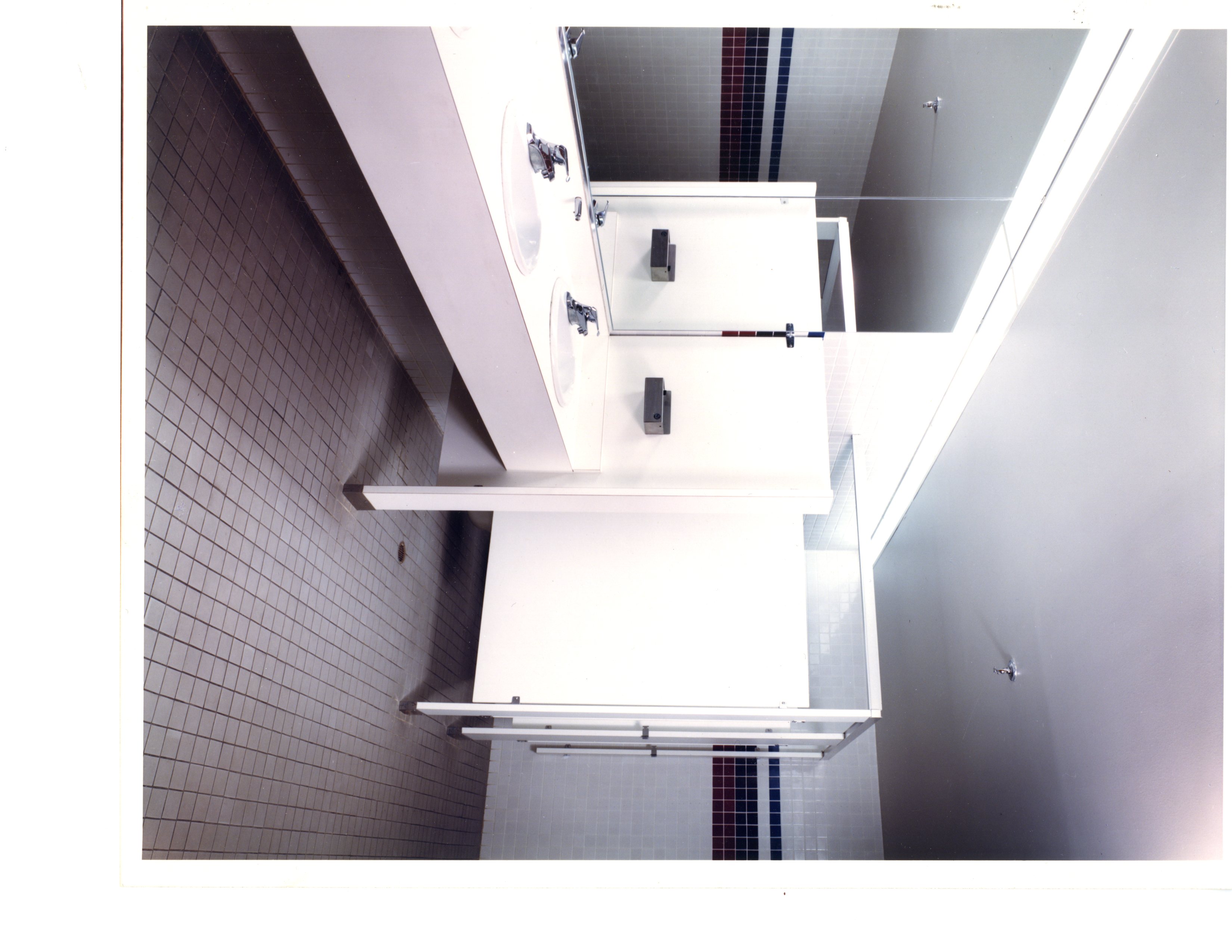 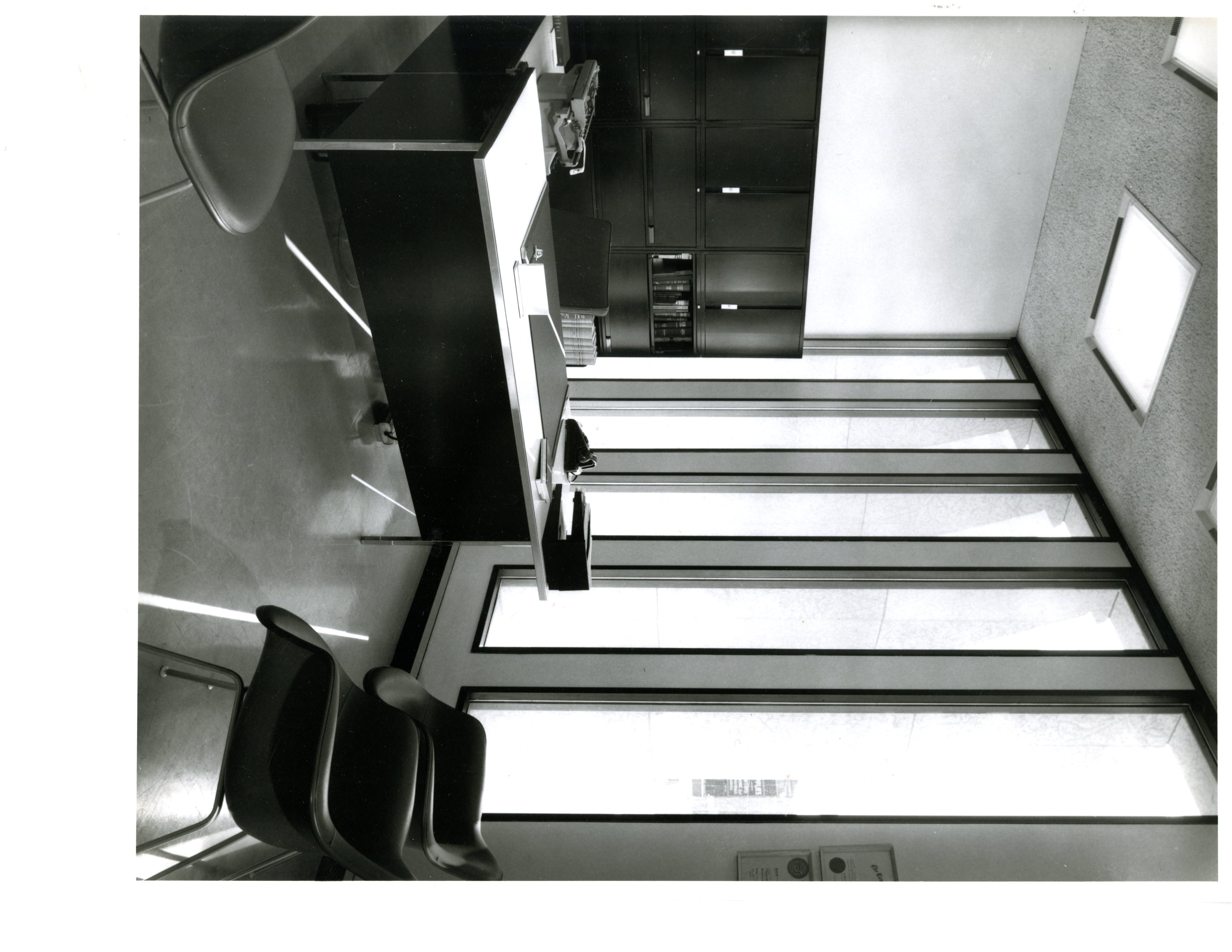 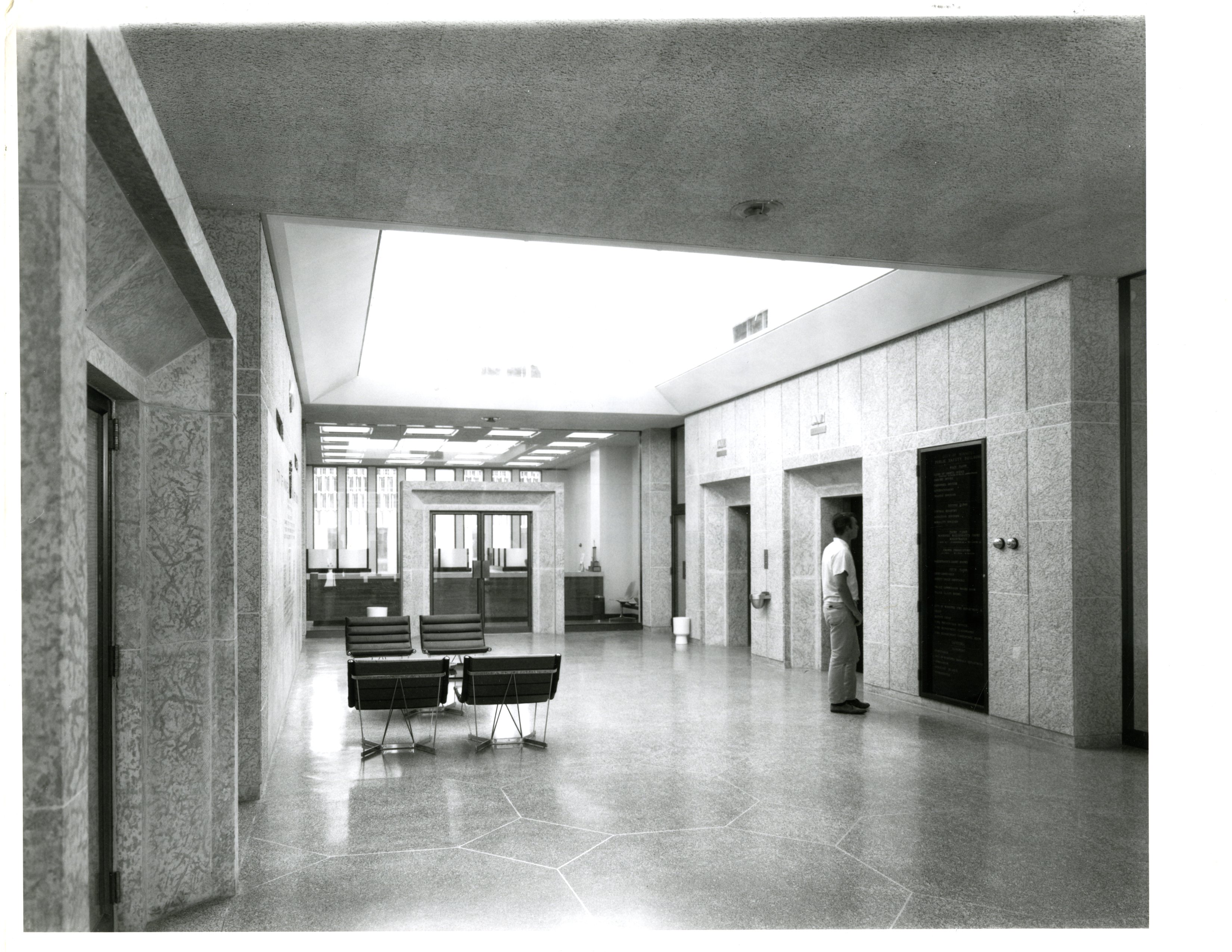 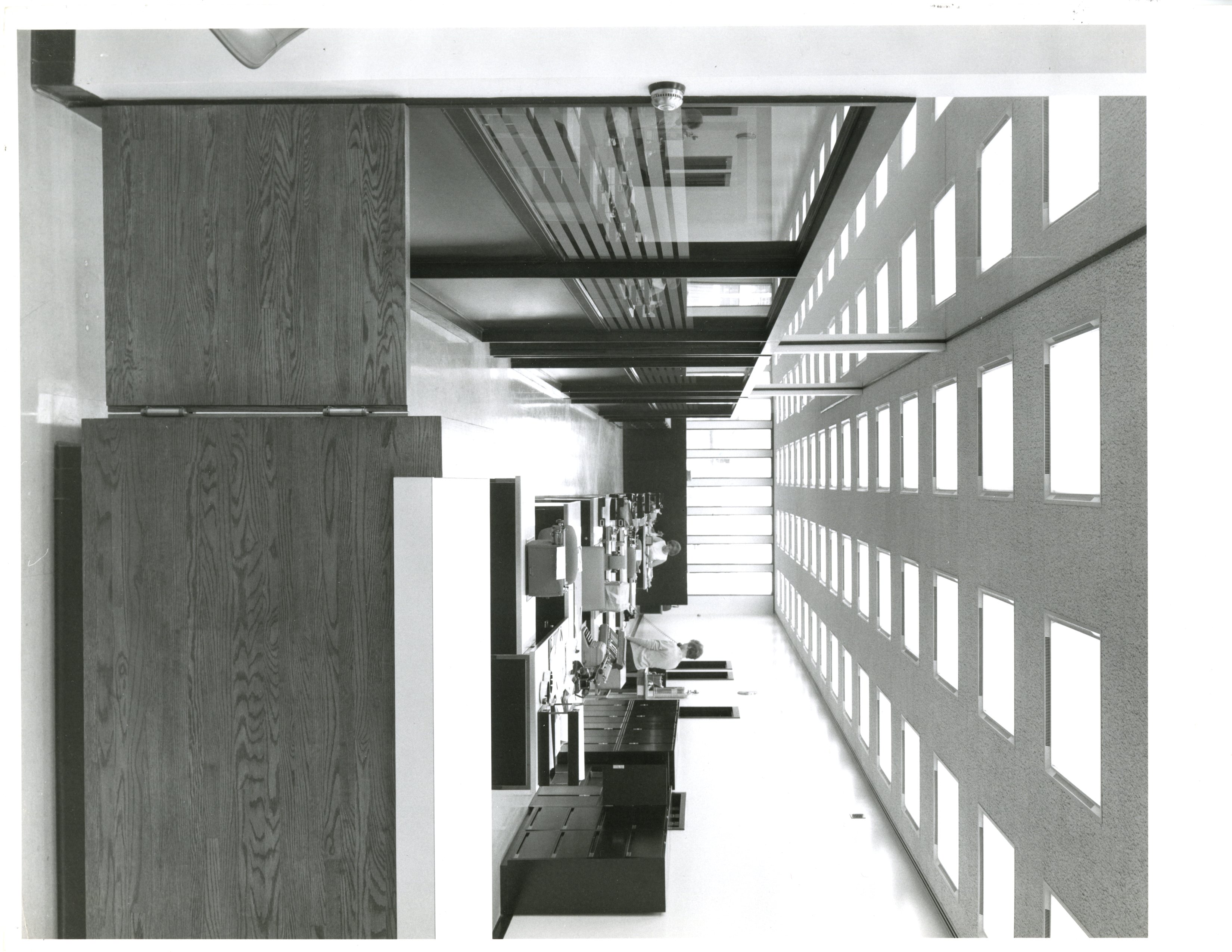 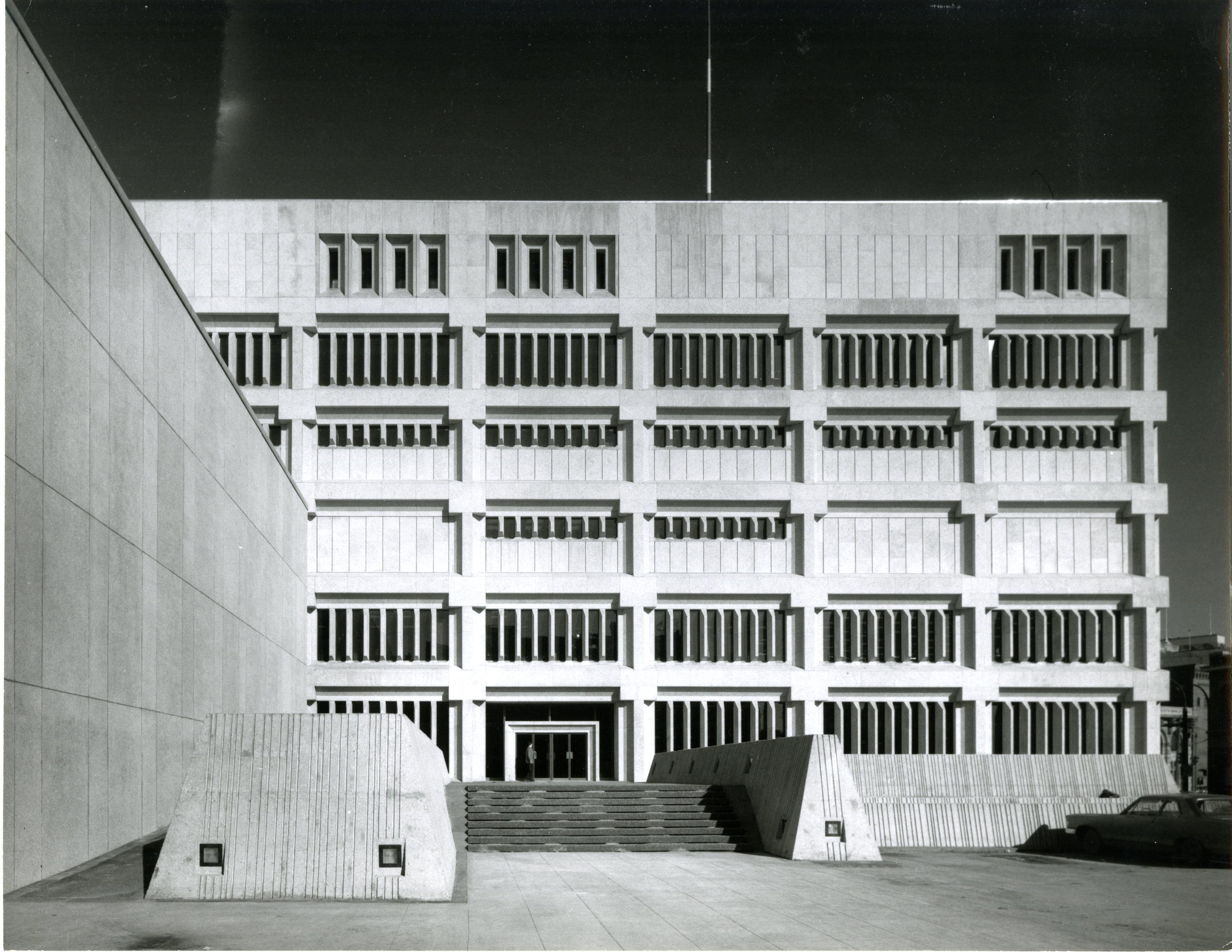 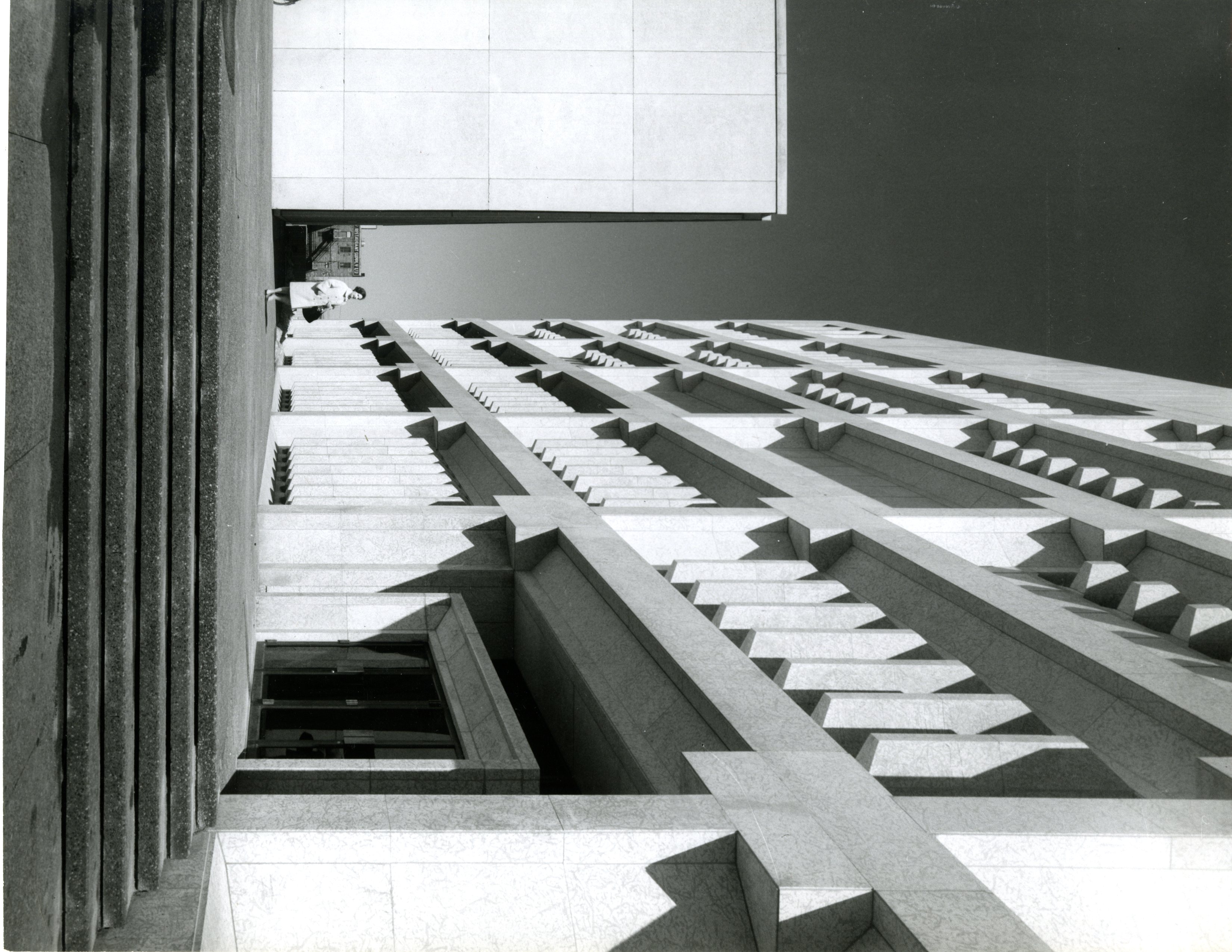 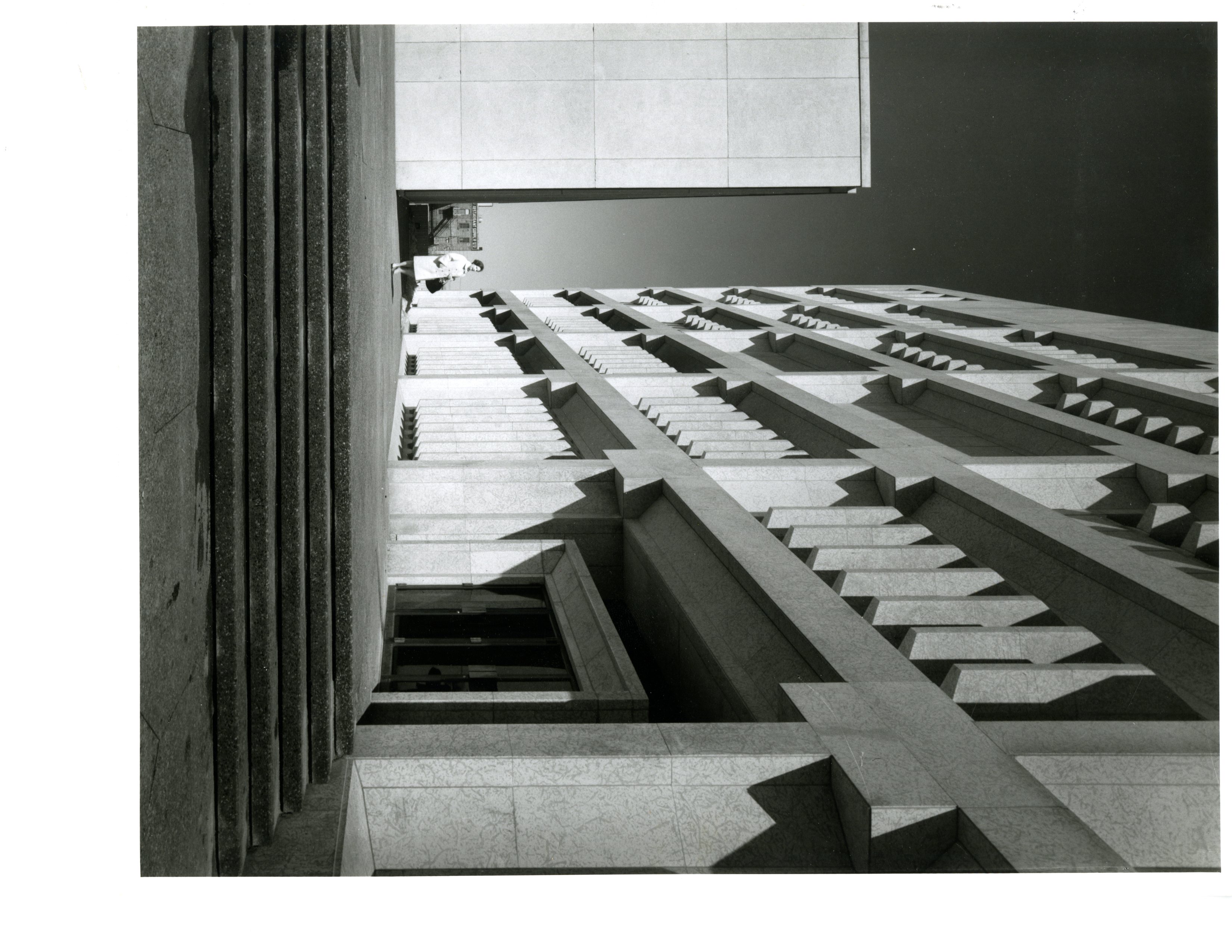 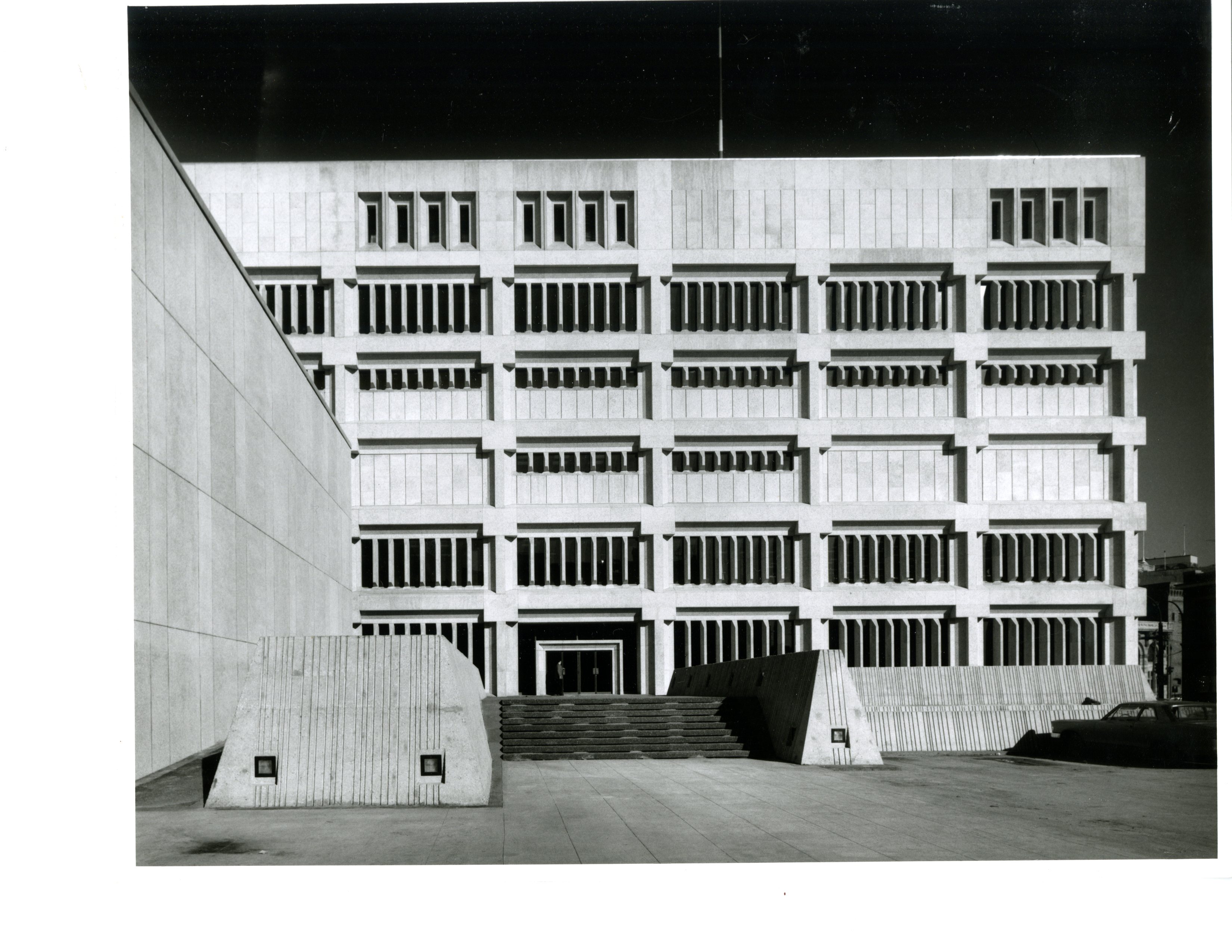 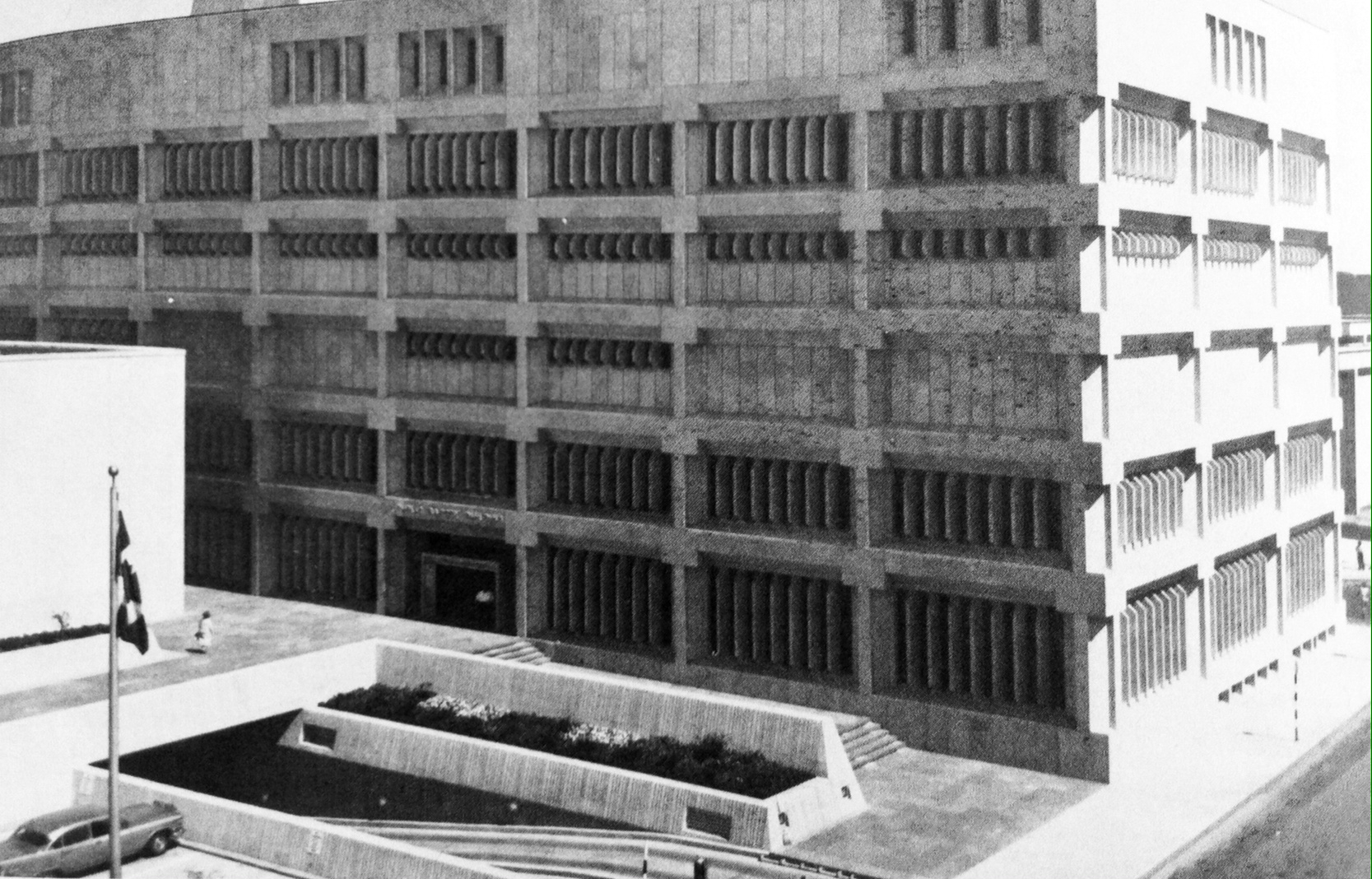 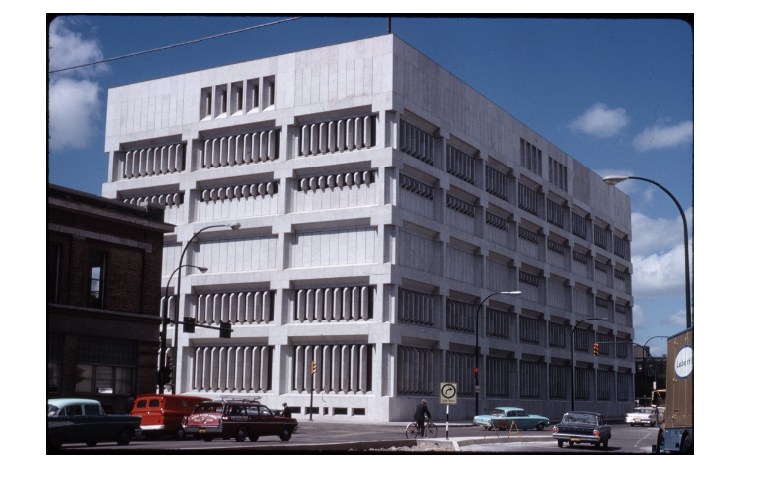 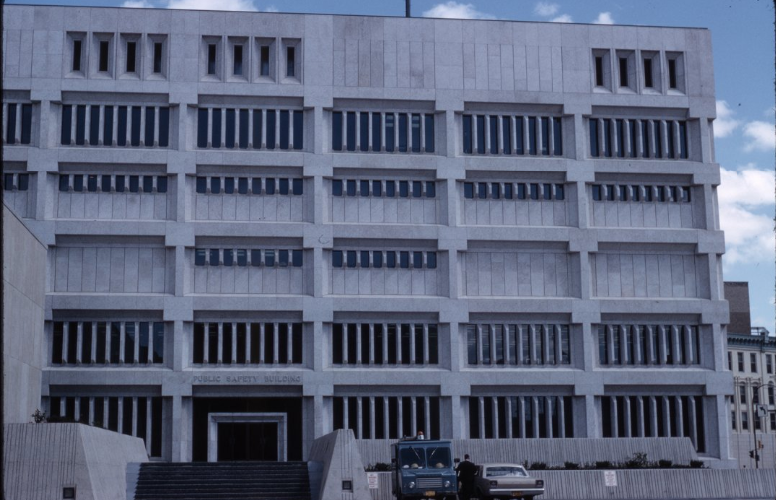 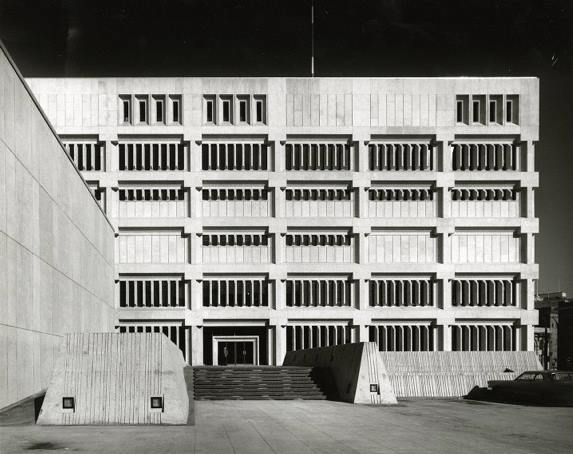 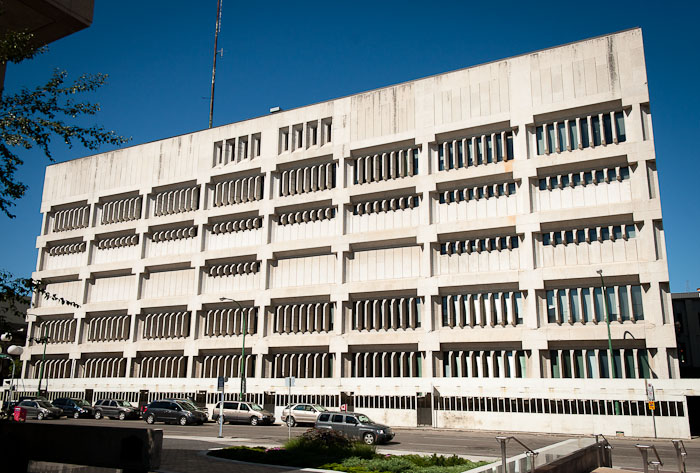 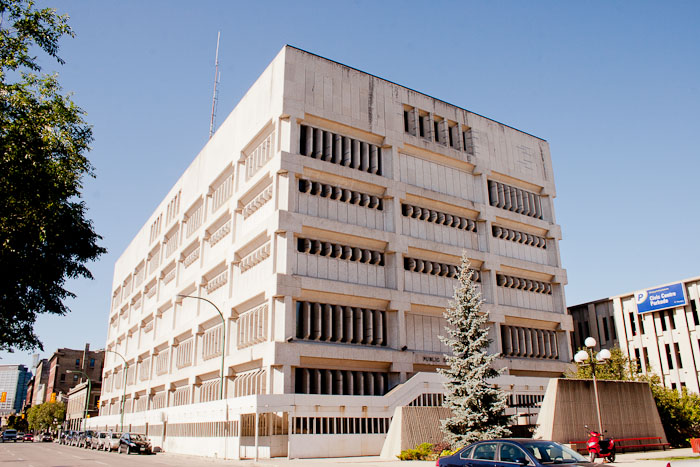 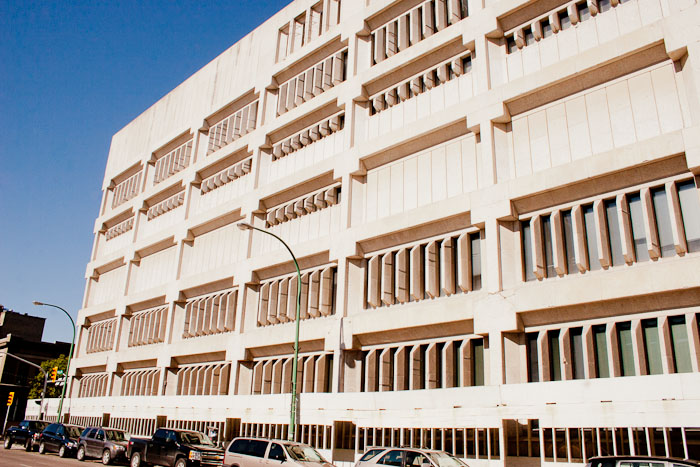 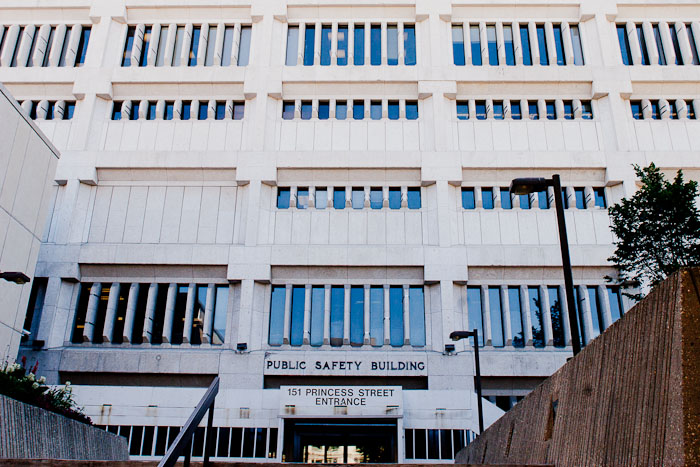 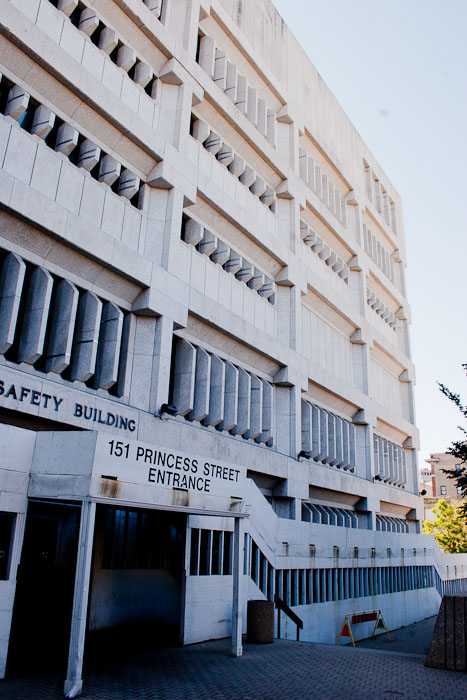 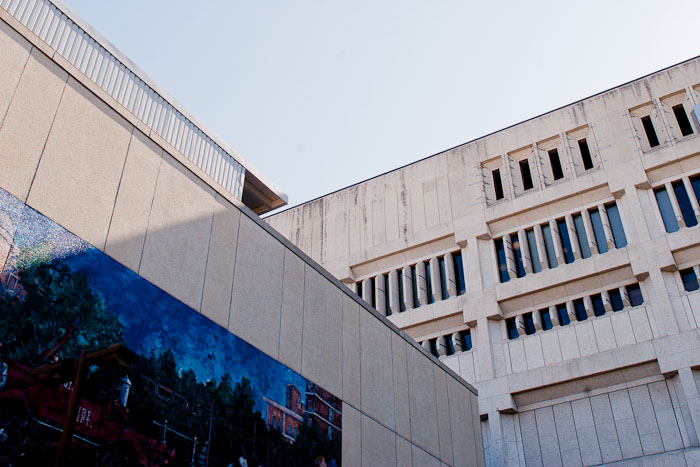 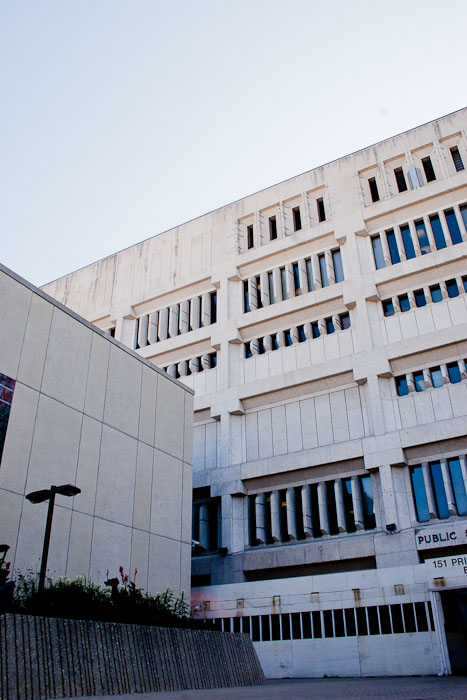 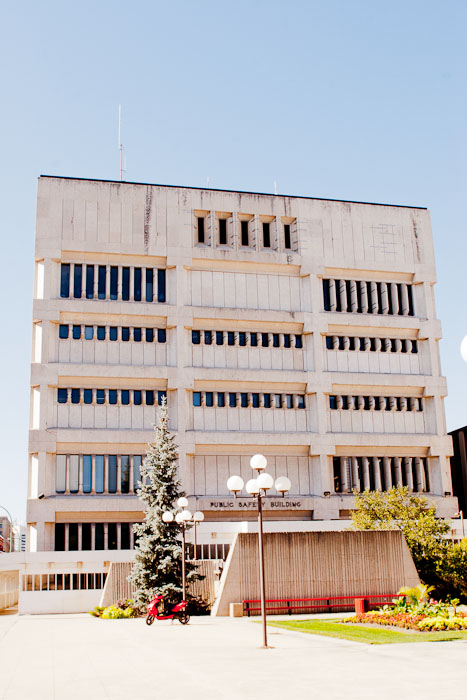 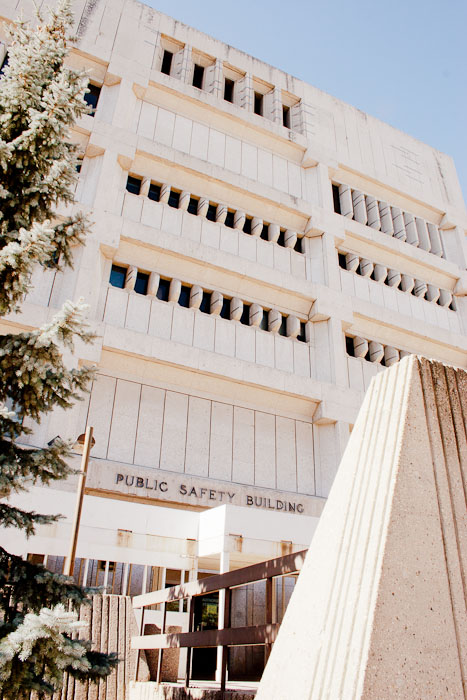 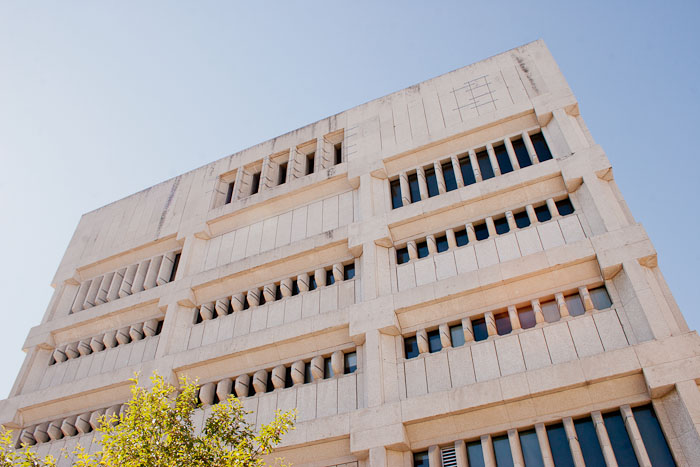 Winnipeg’s Public Safety Building opened in 1966 as a headquarters for the Winnipeg Police Service. The building’s construction was announced in 1964, coming soon after the opening of the adjacent Winnipeg City Hall, located east across King Street. The location of the building was granted at a cost of $600 to the City of Winnipeg in 1875 by the children of the Red River Settlement’s first postmaster. A condition from this time states that this site must always be used for public purposes. At the time that the building was constructed, this site held a nineteenth-century market building which had been substantially altered in the first half of the twentieth-century to house civic offices. In 1964 these offices were moved into the new Winnipeg City Hall Administration Building. This site had been planned to house a new civic structure of the scale and shape of the Public Safety Building, likely a home for the Metropolitan Corporation of Greater Winnipeg. This plan influenced the massing and location of the new City Hall, which was partly conceived to provide a view from Main Street to this location.

Like the Royal Manitoba Theatre Centre, the Public Safety Building is a part of the new Winnipeg civic and arts district of the late 1960s-early 1970s. This fact connects the building to the general Canadian tendency for Brutalist architecture to be associated with government or institutional-use projects and complexes. Elements of this structure which resonate with a Brutalist approach include the use of substantial mullions, the forceful articulation of structure and the employment of heavy masonry, in this case Manitoba Tyndall stone. The latter detail is an important one which makes the building fairly unique; by and large the material of choice for architects employing a Brutalist manner was concrete. Here the use of Tyndall stone tied the building to the neighbouring City Hall complex and to the historical use of this material for important government and institutional facilities in Winnipeg.

The design of the Public Safety Building echoes the surrounding warehouse district, in its scale, massing, use of masonry construction and visual expression of structure. The Brutalist monumentality of the building, with its insular, fortress-like appearance, is directly related to the function of the building as a jail and police headquarters. While integrated into the neighbouring City Hall and arts district, the building is also a unique member of this ensemble in its dramatic embrace structural expression, citadel-like mein and its detailing, such as the use of canted corners on its prominent projecting mullions. The specific visual approach of the Public Safety Building is rare; one rare comparison is the Law School Building at the University of Sydney, Australia, of 1969.

Officers of the police force worked closely with the architects in the planning of the complex. Their efforts resulted in the "construction of a building second to none on the continent; it being well-located, well-designed and functionally planned to meet police requirements.” Press accounts at the time of the building’s construction deemed it an electrical marvel for the technology it housed, most notably that associated with controlling signals across the city, as well as those used for Winnipeg’s 999 emergency number, the first such hotline in North America.

When first completed, the Public Safety Building contained courtrooms, a small detention area, communication and crime detection facilities, garage and offices. The first floor of the public safety building housed the clerk of the court, the police traffic division, station duty office and the 999 emergency service and fire alarm office. The basement hosted the patrol division and signals offices. On the second floor was the detective division, crime laboratory, morality division, juvenile division and the registry division. The third floor was planned for the courtrooms and female detention while the fourth floor contained male detention quarters. The fifth floor featured the police administration offices and classrooms, together with the fire department administrative offices, fire training classrooms and staff cafeteria. The sixth floor was used for mechanical facilities and storage room.