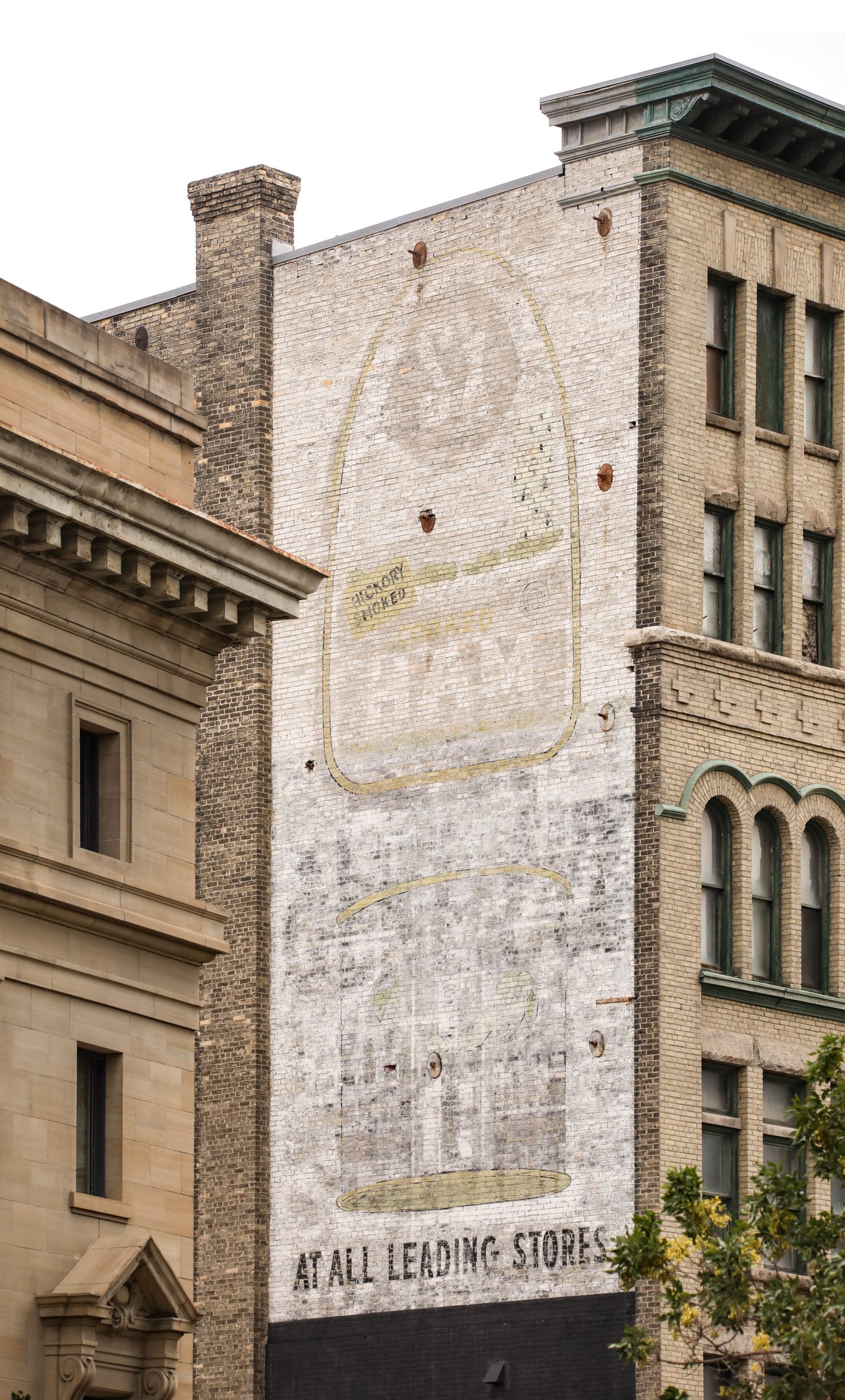 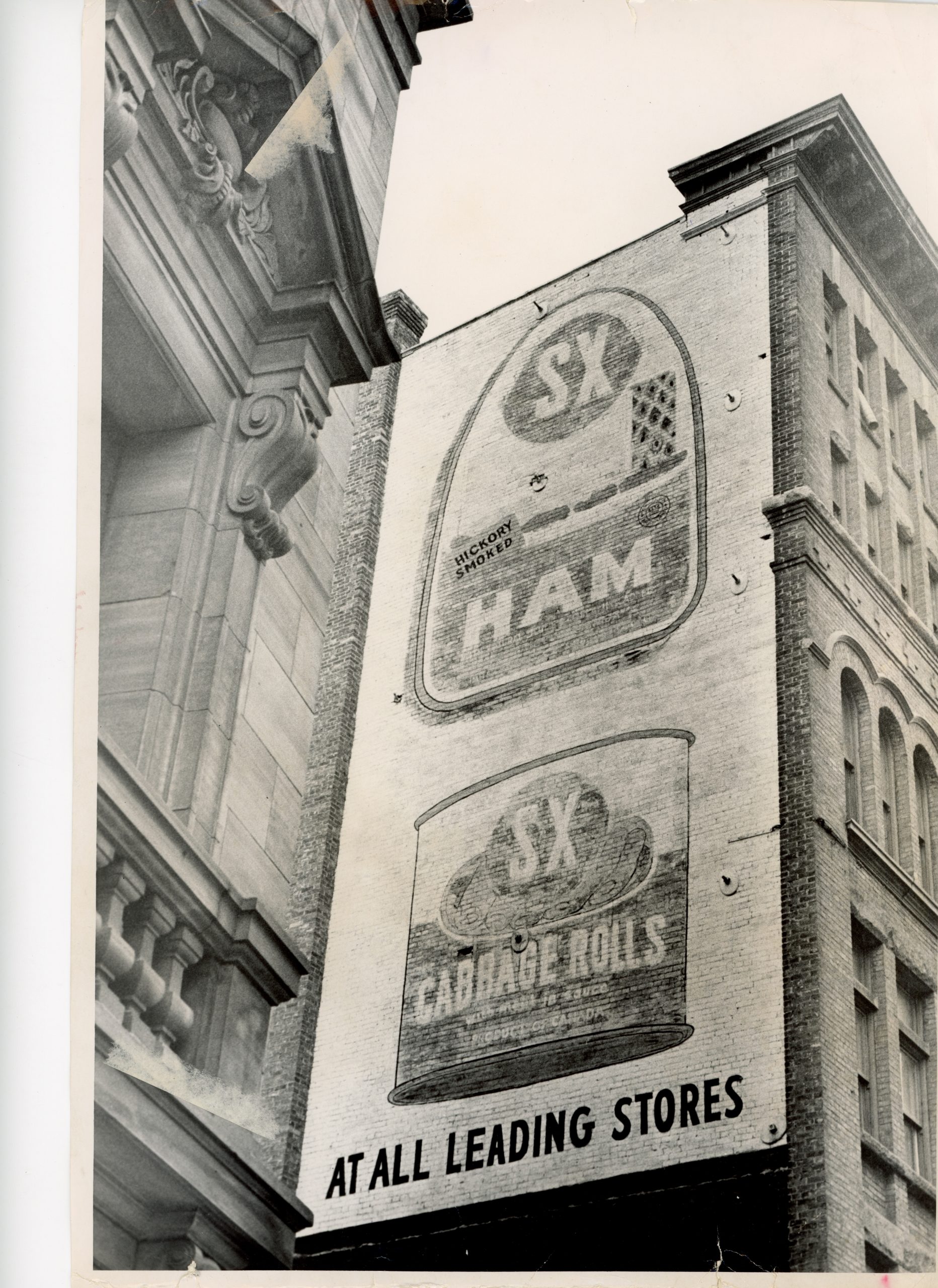 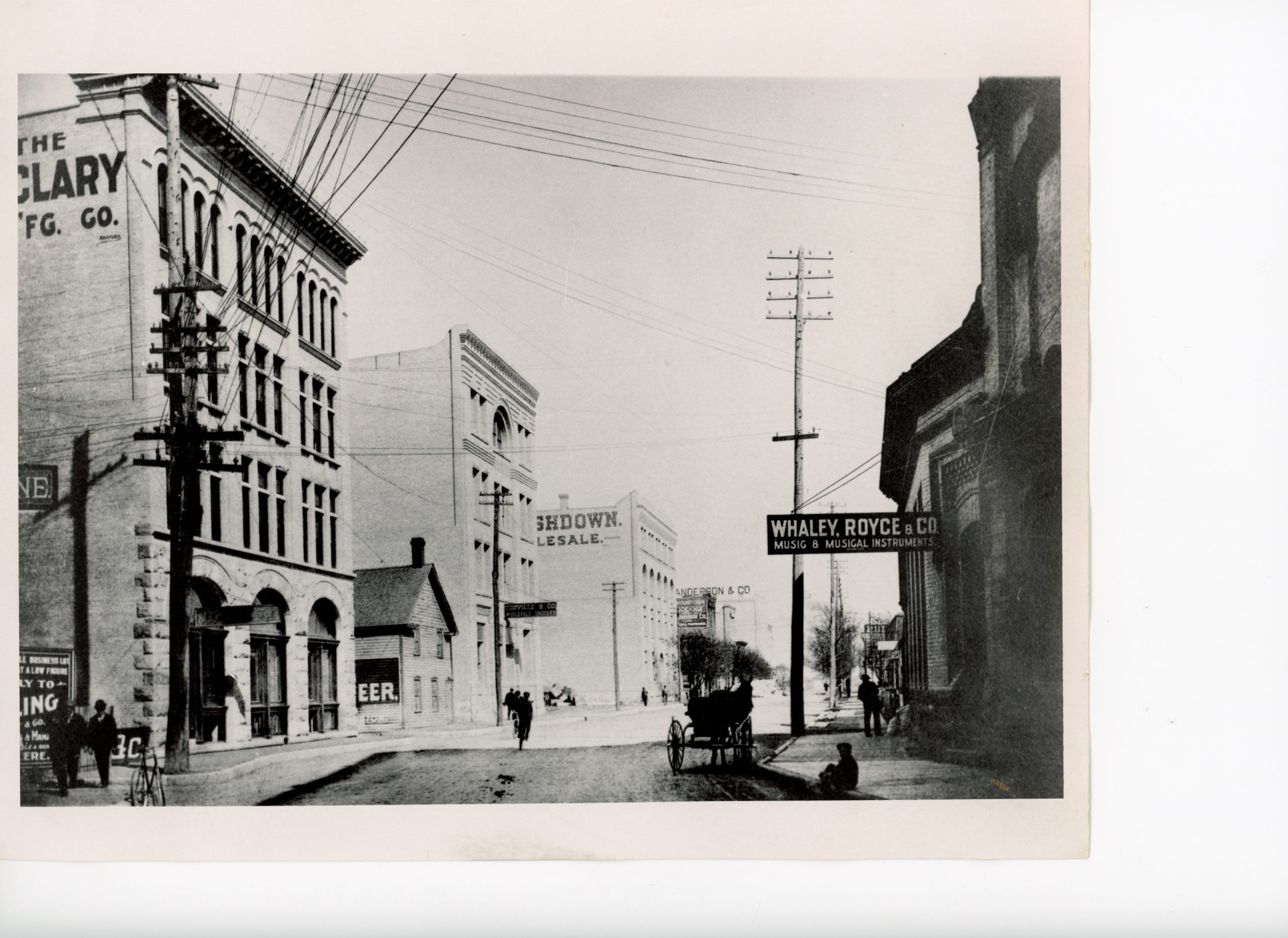 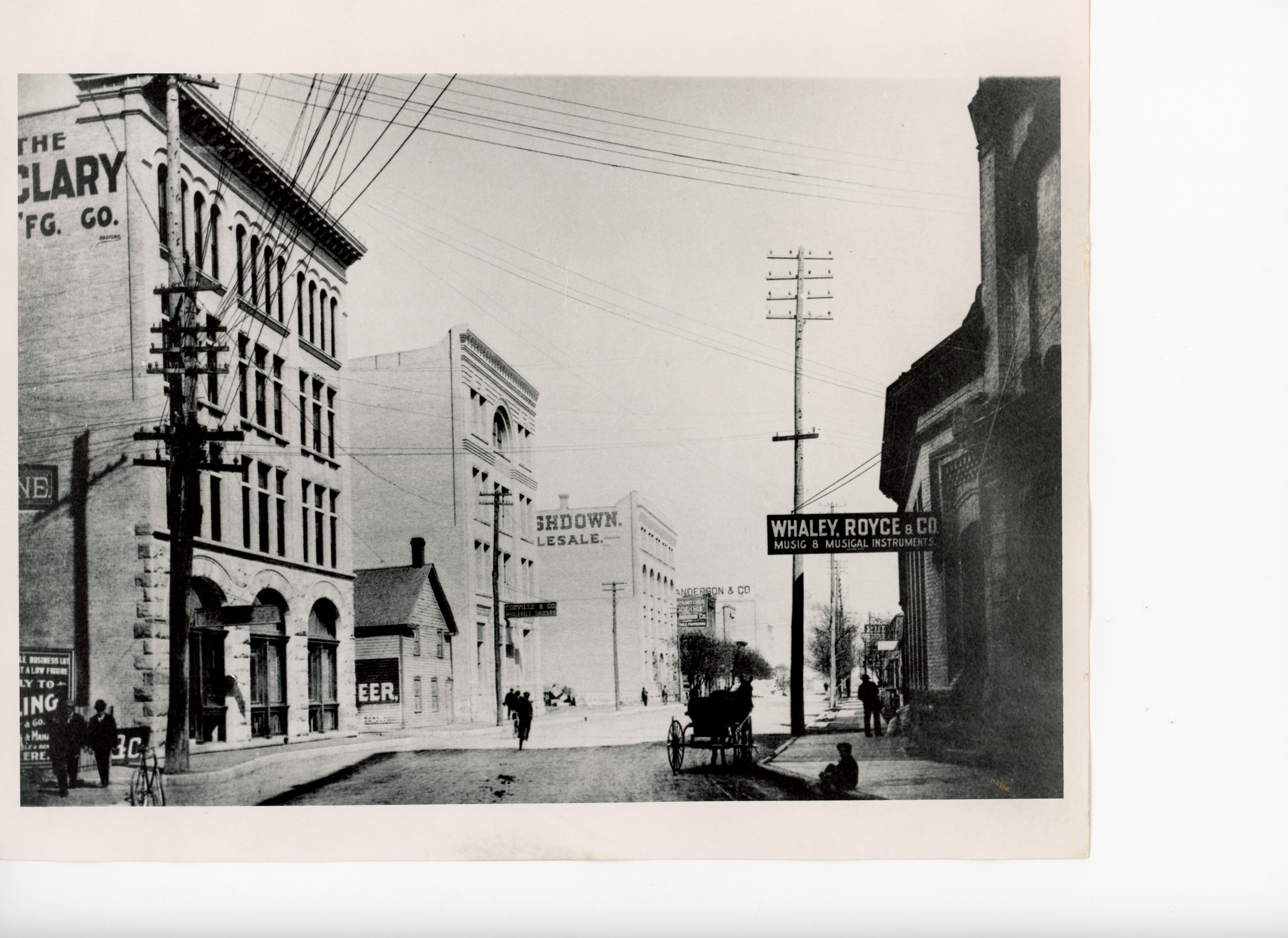 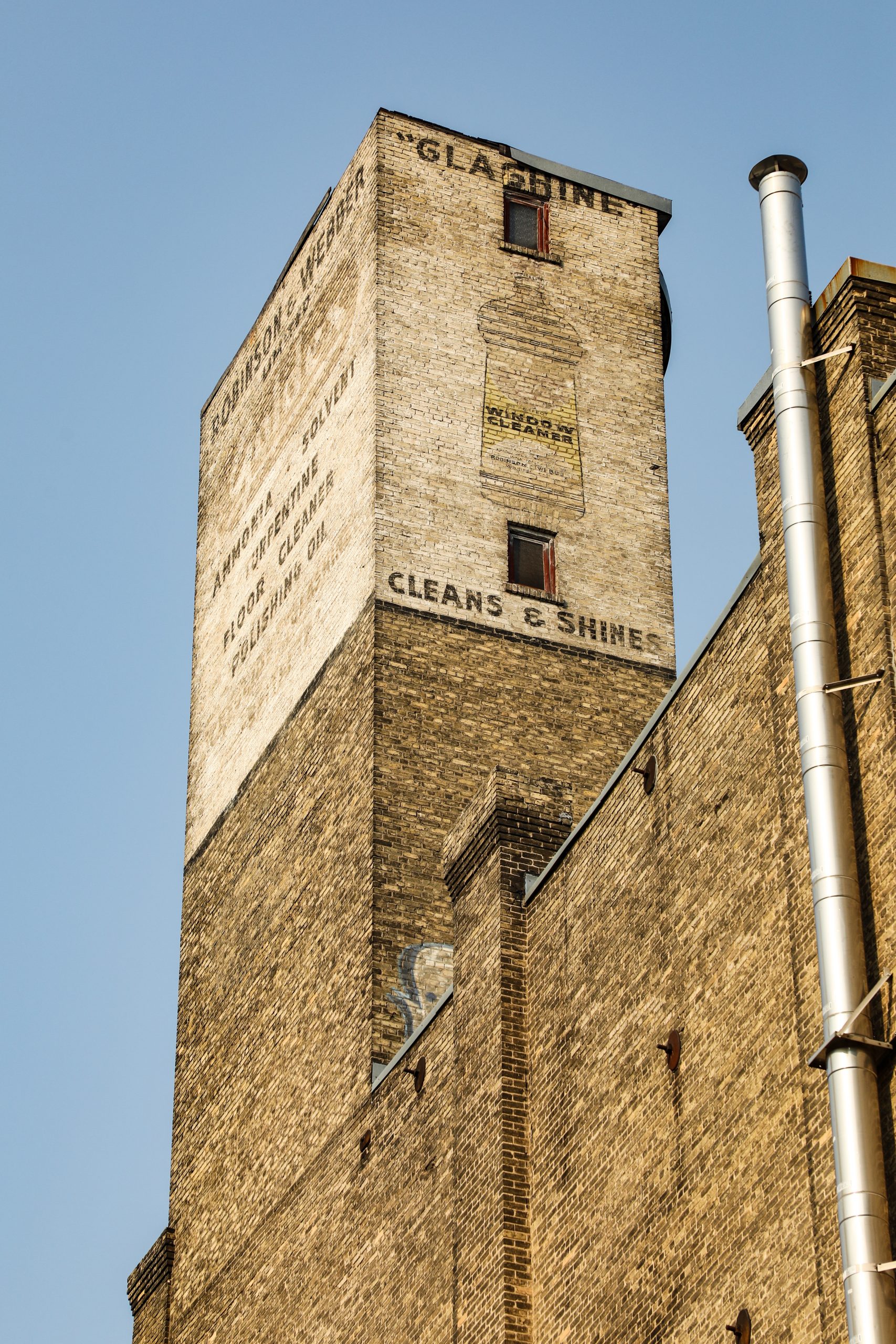 Architect S. Frank Peters designed 185 Bannatyne as a western base for the McClary Manufacturing Company, who specialised in wood stoves and other metal implements. The timber framed, brick clad warehouse was added to in 1903, due to business booming. McClary occupied the building until the 1950s.

Robinson and Webber was founded in 1919 as a paint and chemical supply firm. They acted as a manufactures’ agent and as a private label manufacturer of flagship brands Goldex and Glashine. In the early 1940s, they leased part of 104 – 108 Princess for chemical storage, but in 1945, the north section of the building caught fire. The structure was torn down to its foundation and rebuilt, but by the mid 1950s, the space wasn’t suitable for the company’s growing operation and they moved to 185 Bannatyne in 1955. The company remained at that location until the 1980s and is still in operation as RW Consumer Products.

The water tower at the top of the building features a list of brands that Robinson and Webber sold to the public, including Creocide, Spitfire, Goldex and Glashine. The south sign features a reproduction of a bottle of Glashine window cleaner, with a second, extremely faded bottle on the north side of the tower.

Essex Packers was founded in 1925 in Hamilton, Ontario. Within 25 years, they became one of North America’s largest producers of canned hams, which were marketed under their SX brand name. In the early 1960s, the company branched into automatic vending machines as an additional outlet to sell their products, but abandoned the idea a year later. With lackluster sales and increased US competition, the company went bankrupt in 1975 and closed their doors. The sign featured at 185 Bannatyne Avenue showcases their flagship SX canned ham and a profile of their less popular SX canned cabbage rolls.

This sign is a faithful reproduction of an actual product sold on retail shelves. Skilled artists painted the can of SX ham in the early 1960s, and even included the hickory smoked label in the ad.