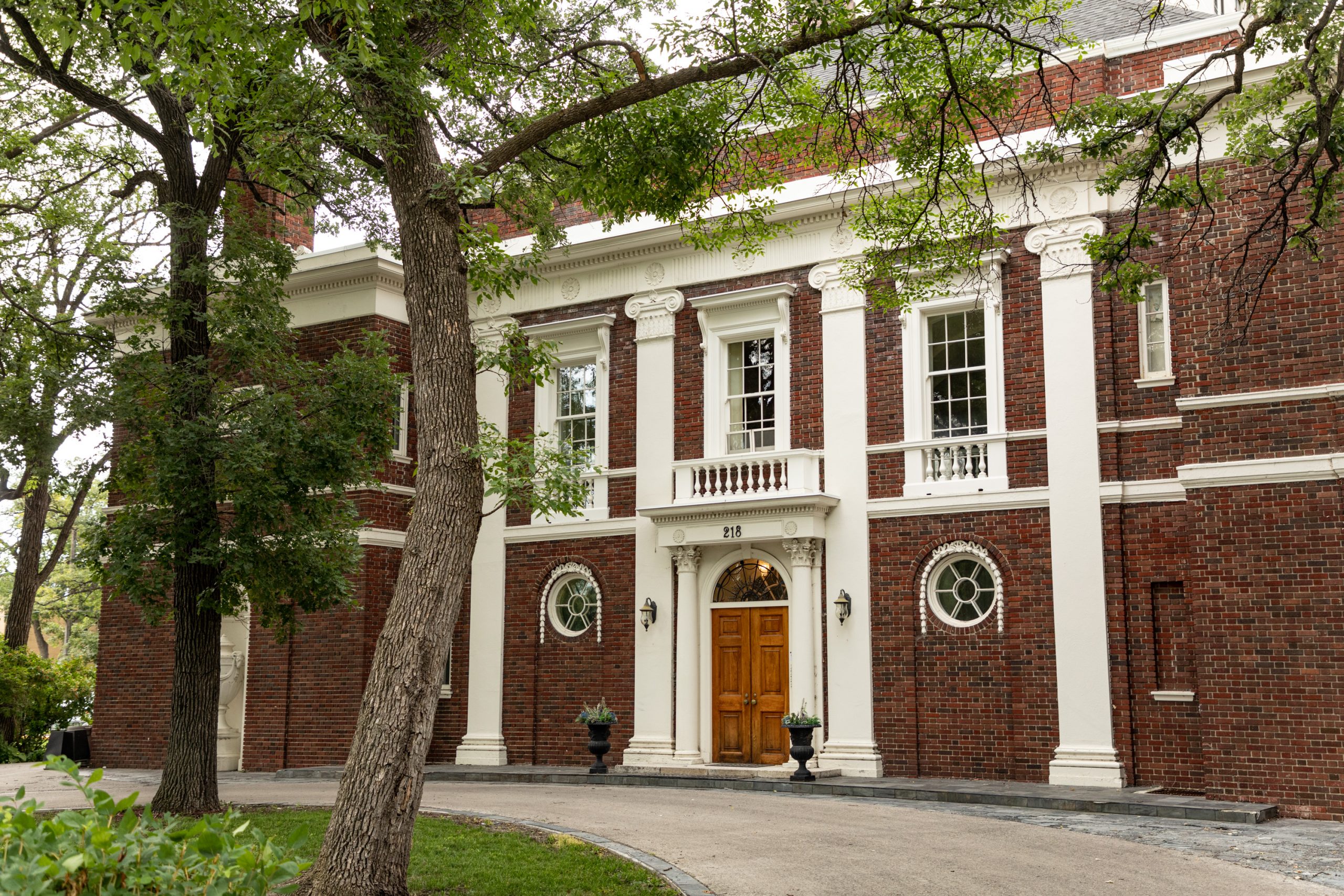 Many prominent citizens and architects have had a hand in the design and history of the Moss House.

The home’s first owner was Jerry Robinson, who like so many others settling in Fort Rouge, was a prominent Winnipeg business owner. Robinson constructed a fine two-storey home for his family in 1901 before giving it to his daughter Lottie and her new husband Walter Moss as a wedding present. This home was designed by prominent Winnipeg architect James Cadham.

Over the course of the Moss family residency, several alterations were made. In 1909, the couple paid $9,000 for an addition to the house designed by architect Herbert B. Rugh. In 1913, another addition took place—this time planned by architect George Northwood.

The largest project of all took place in 1917, under the supervision of architect Raymond Carey. With a much grander cost of $40,500, this project almost completely renovated the home into the structure we see today.

Designed in the Georgian style, the Moss House has a characteristically symmetrical facade with an ornate entrance. White Corinthian capped columns frame the doorway and support the entablature above. Larger unadorned columns run the full height of the building and connect to a larger white cornice which is decorated with detailed floral panels. The exterior is today one of the finer examples of Georgian style architecture in Winnipeg.

The Moss’s sold the home to Harold D. Gooderham in 1928, and he lived there until 1931. Harold Aikins then bought the house. The son of Manitoba Lieutenant Governor James Aikins, Harold was a lawyer and frequent supporter of the Winnipeg Art Gallery. Aikins was so dedicated to the patronage of Winnipeg’s arts community that upon his death in 1954 he willed the Moss House to the art gallery.

For a variety of reasons, the Moss House proved to be an unsuitable location for the Winnipeg Art Gallery so the home was sold by 1956. Its next owners were among its most famous: Max Kantor and his wife Mireille Grandpierre-Kantor. Born in 1918, Max Kantor was a Canadian 100-yard dash champion who went on to fight in the Second World War in France (where he met his wife), and to run his own insurance company.

Mireille Grandpierre-Kantor, meanwhile, had a storied life of her own. She began her ballet career in France at the age of five, and after several years of performing at the Russian Ballet, became the principal dancer in the Paris Opera Ballet. In Winnipeg, she opened her own Ballet Conservatory at Moss House.The house was sold after Mireille Grandpierre-Kantor passed away in 2008.