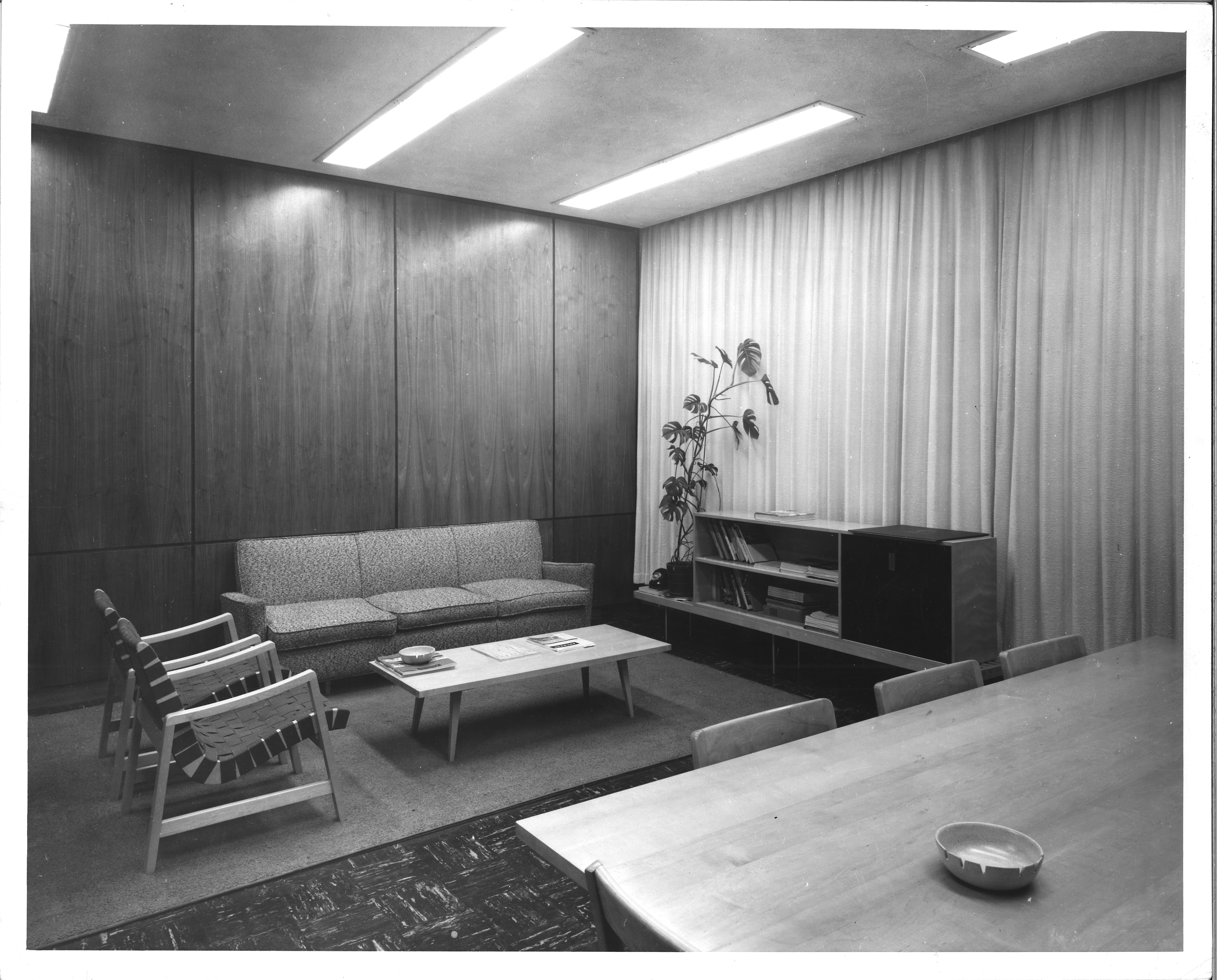 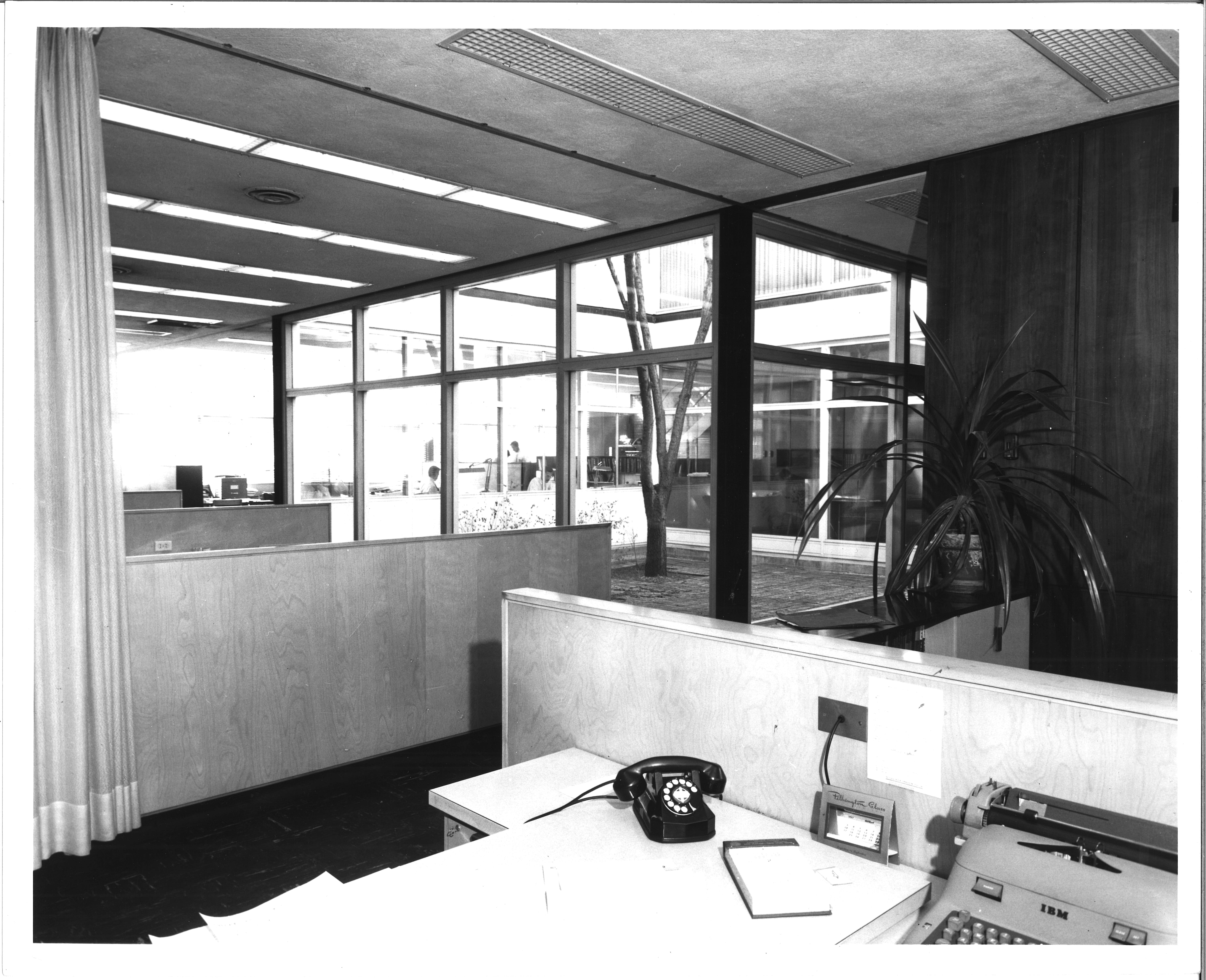 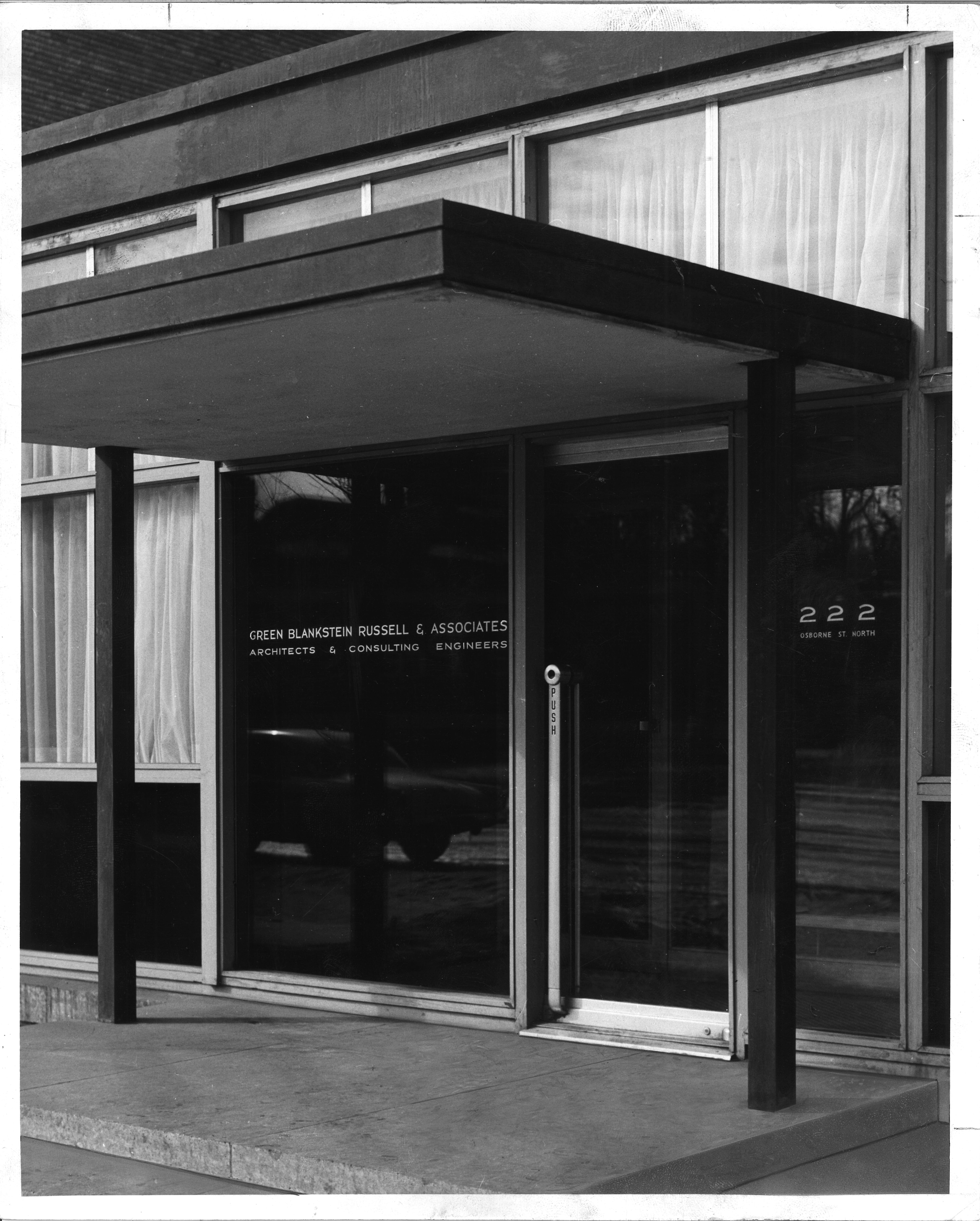 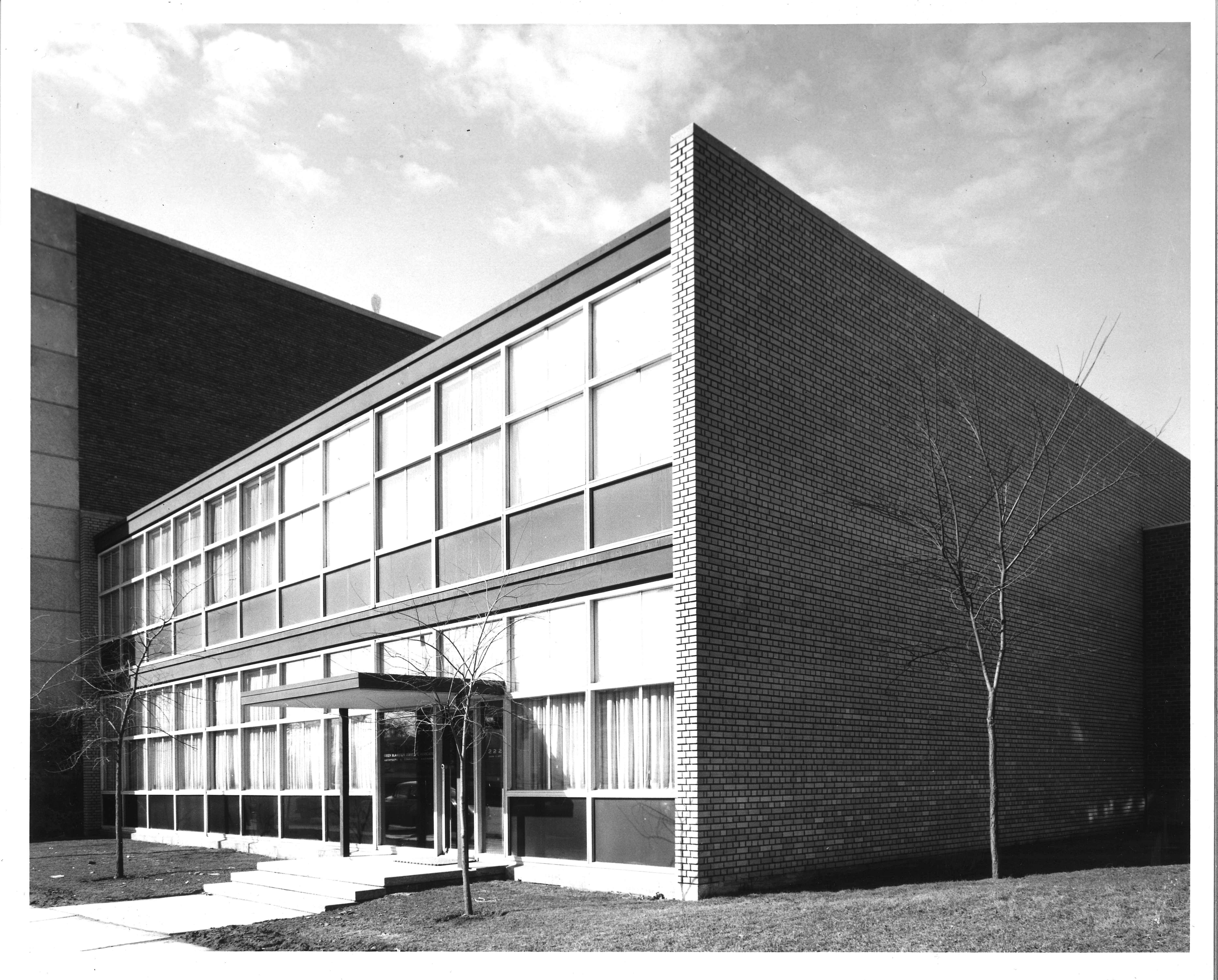 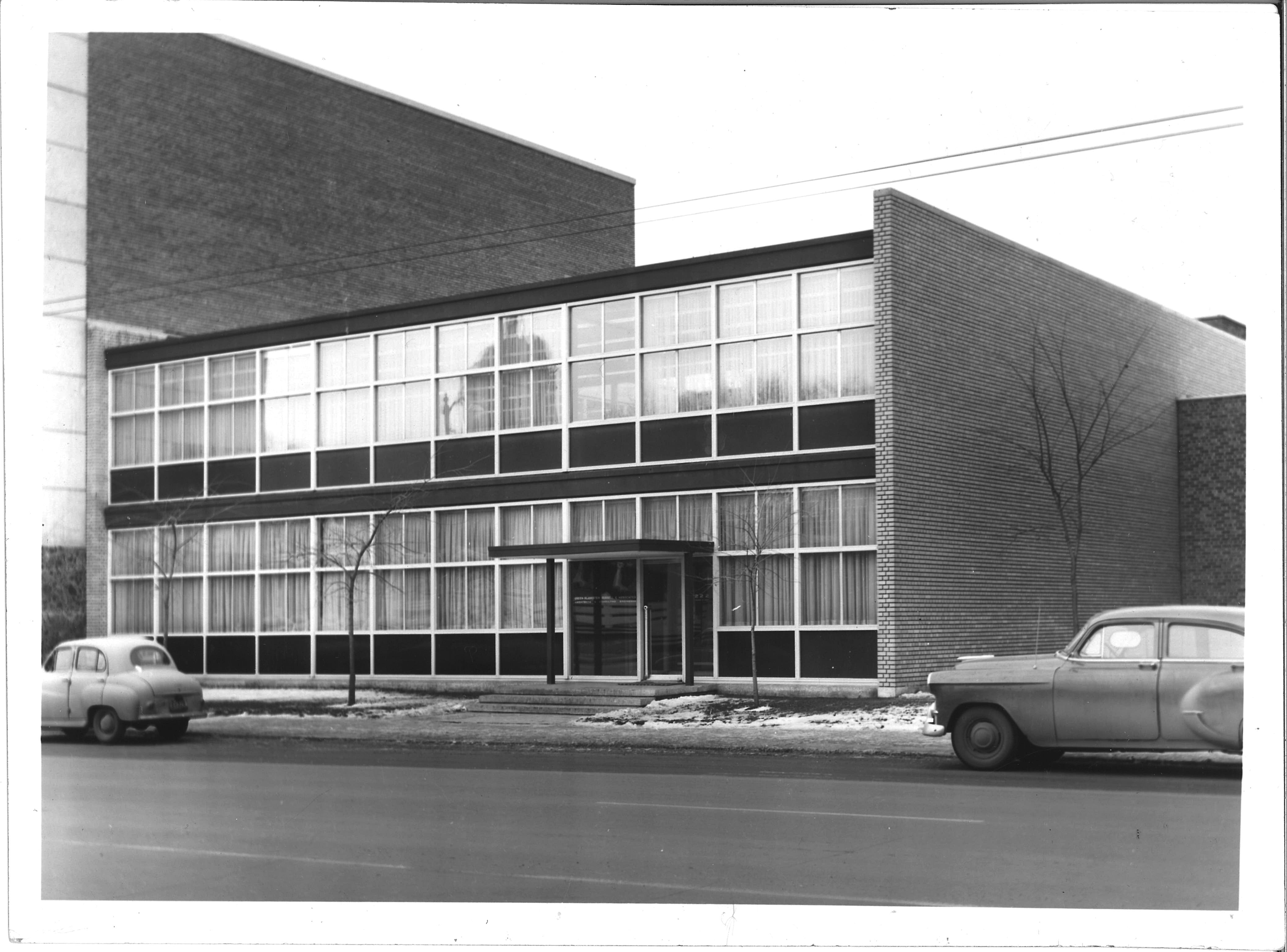 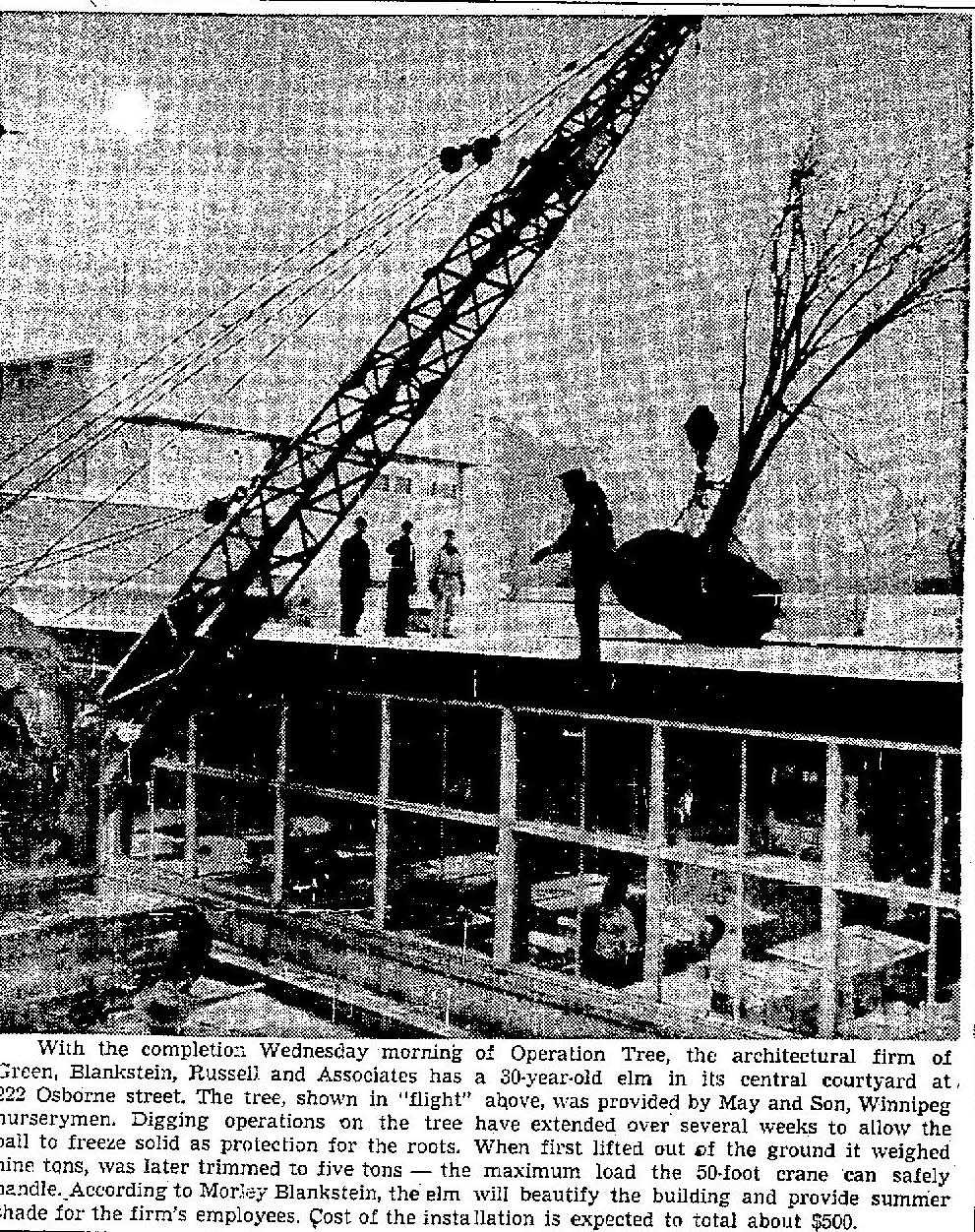 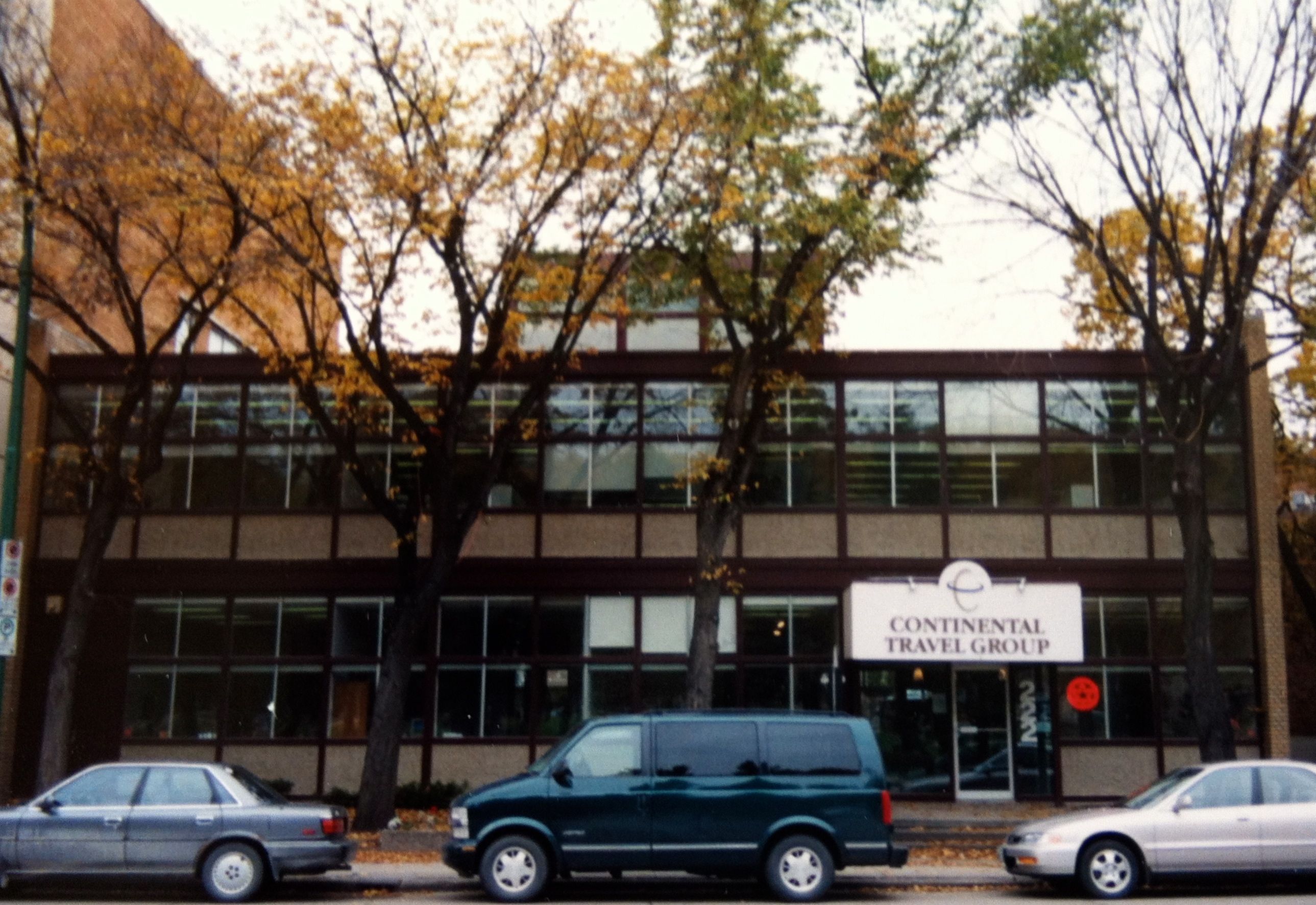 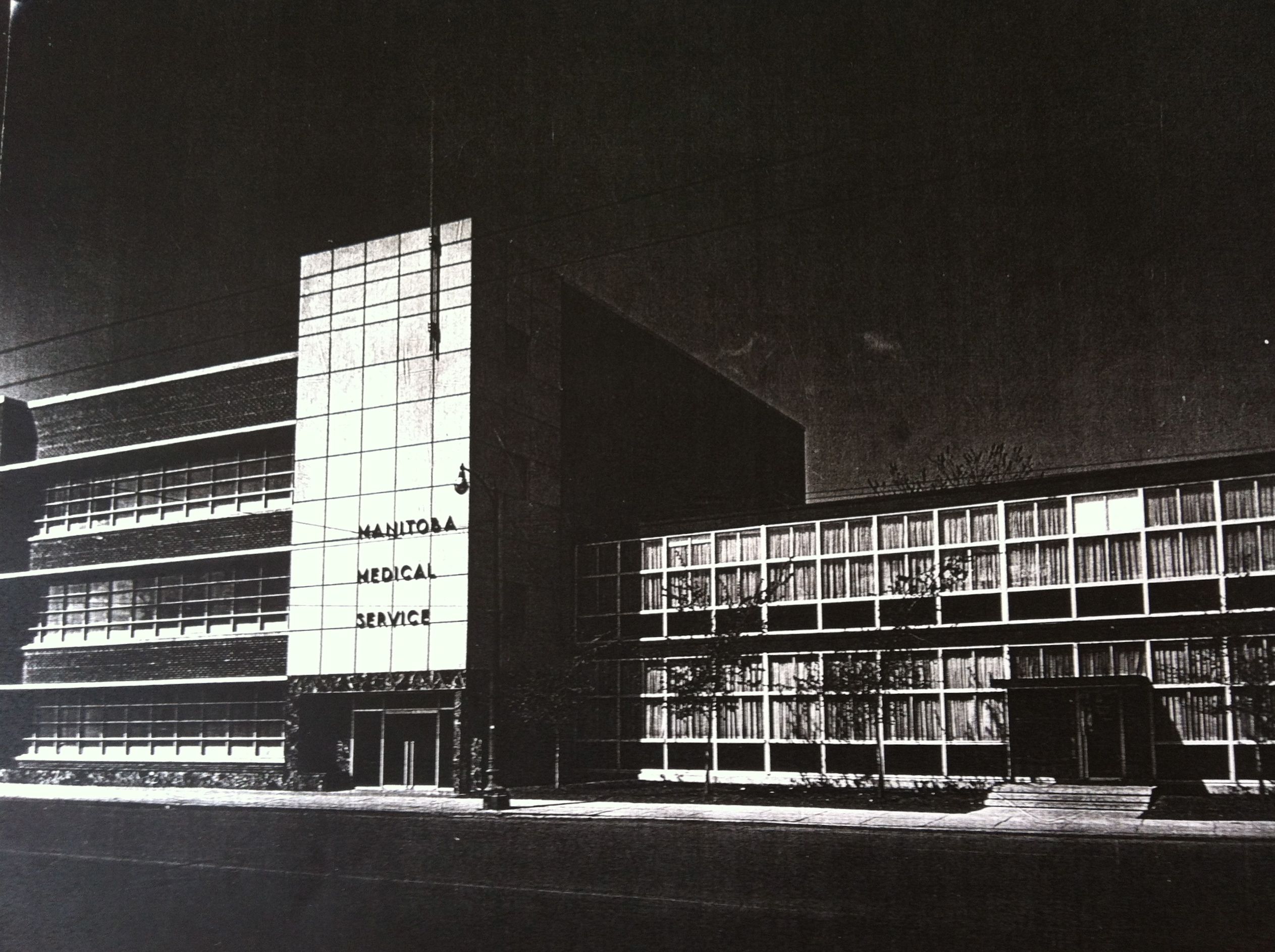 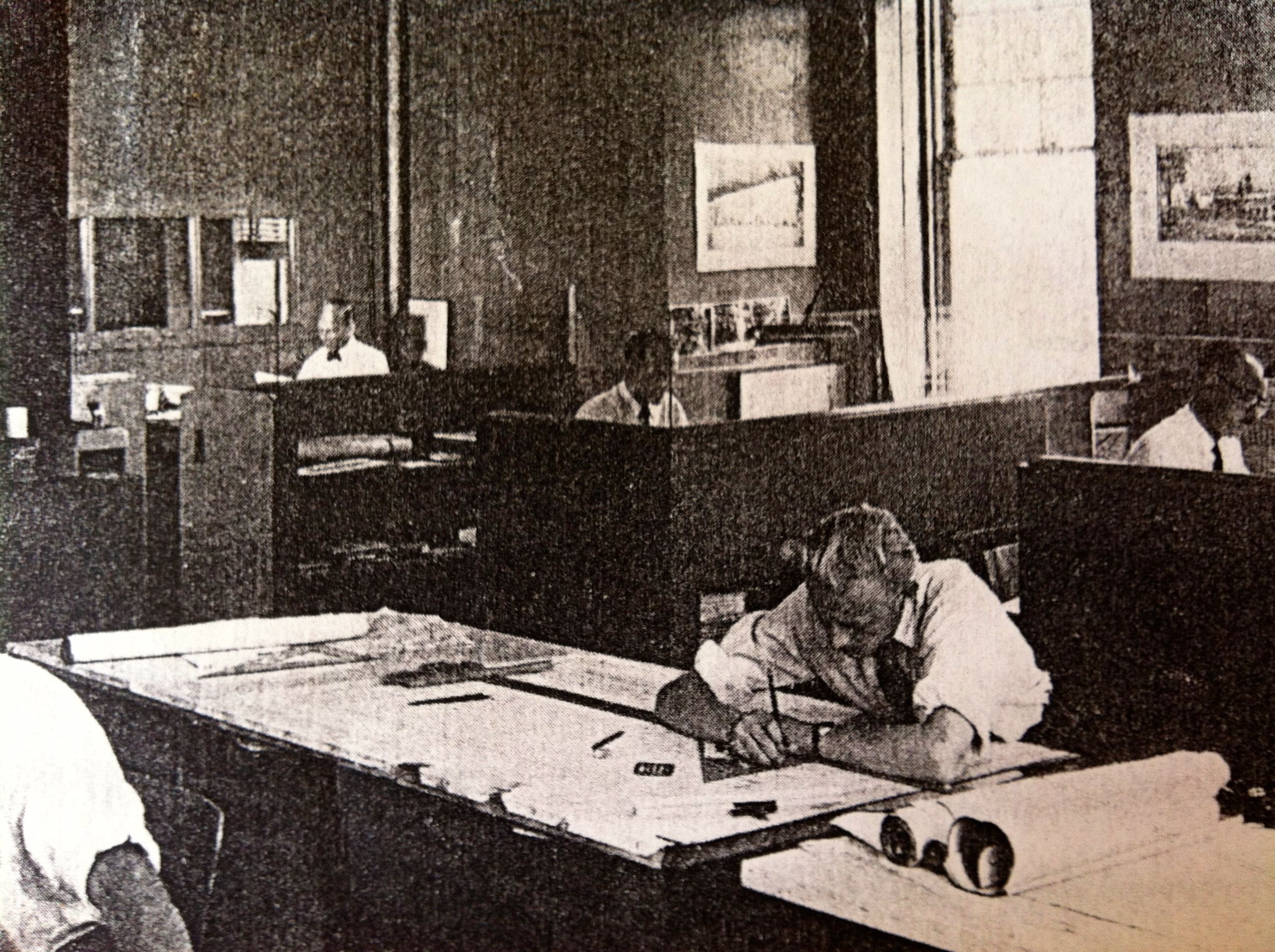 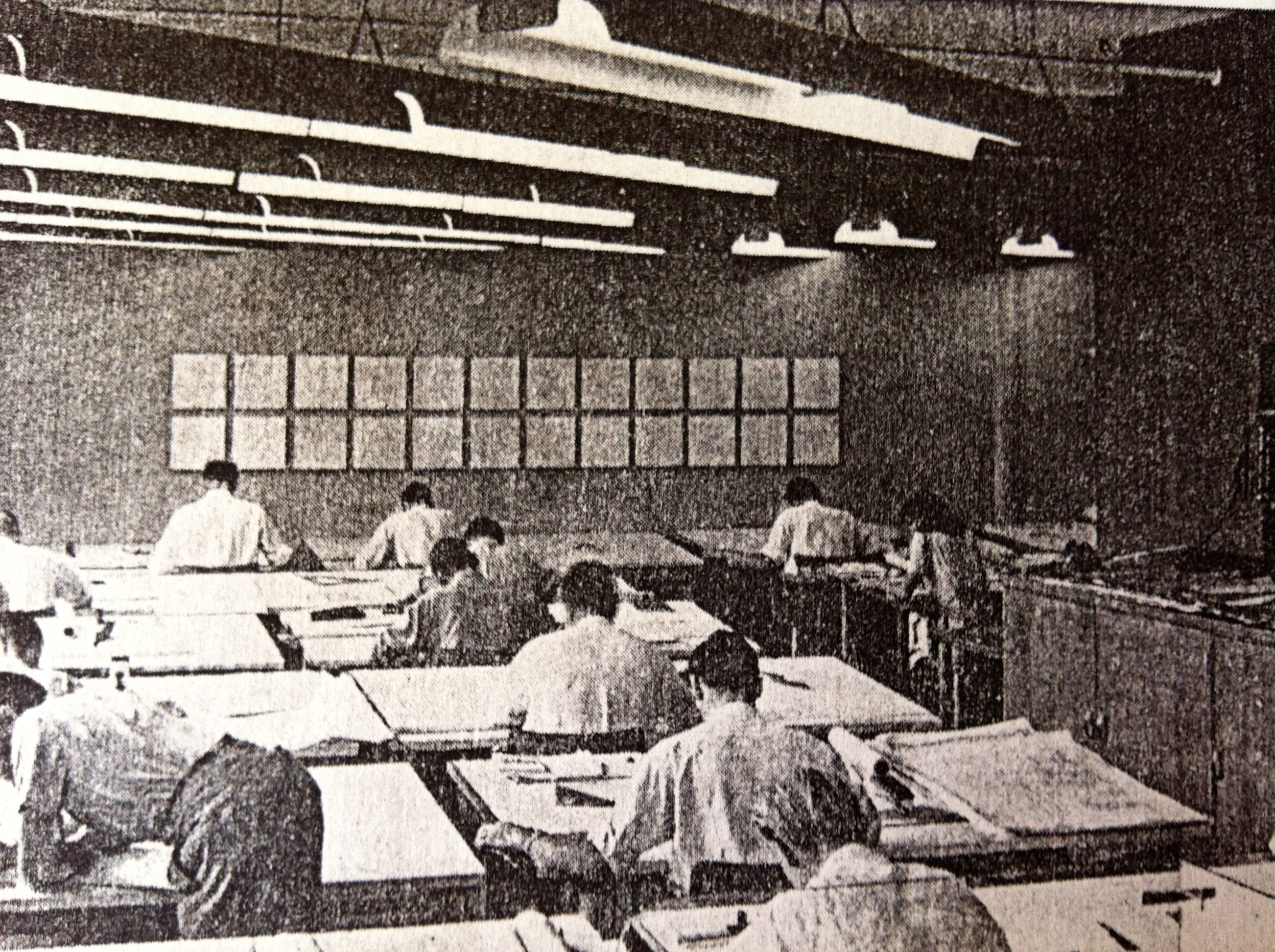 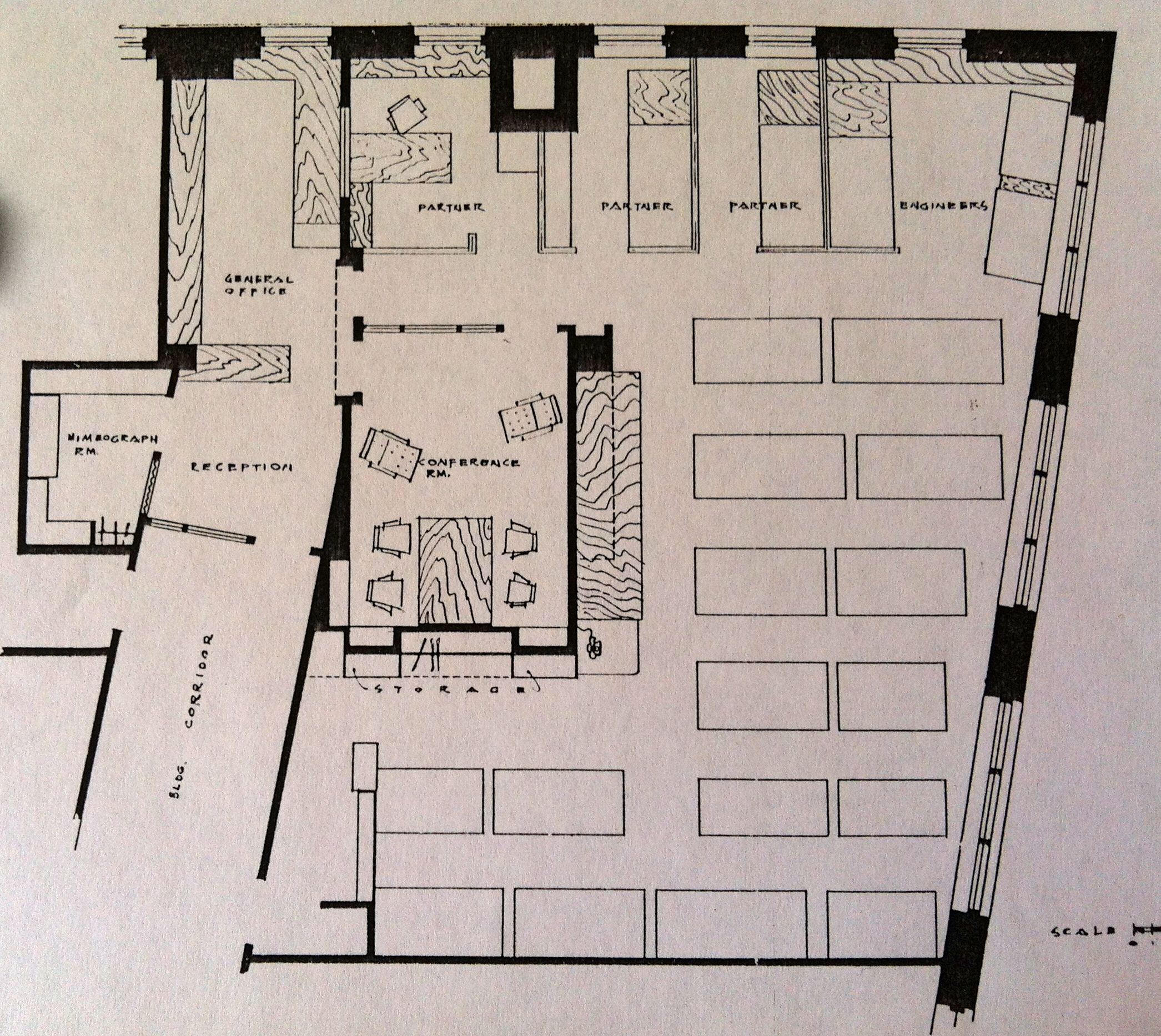 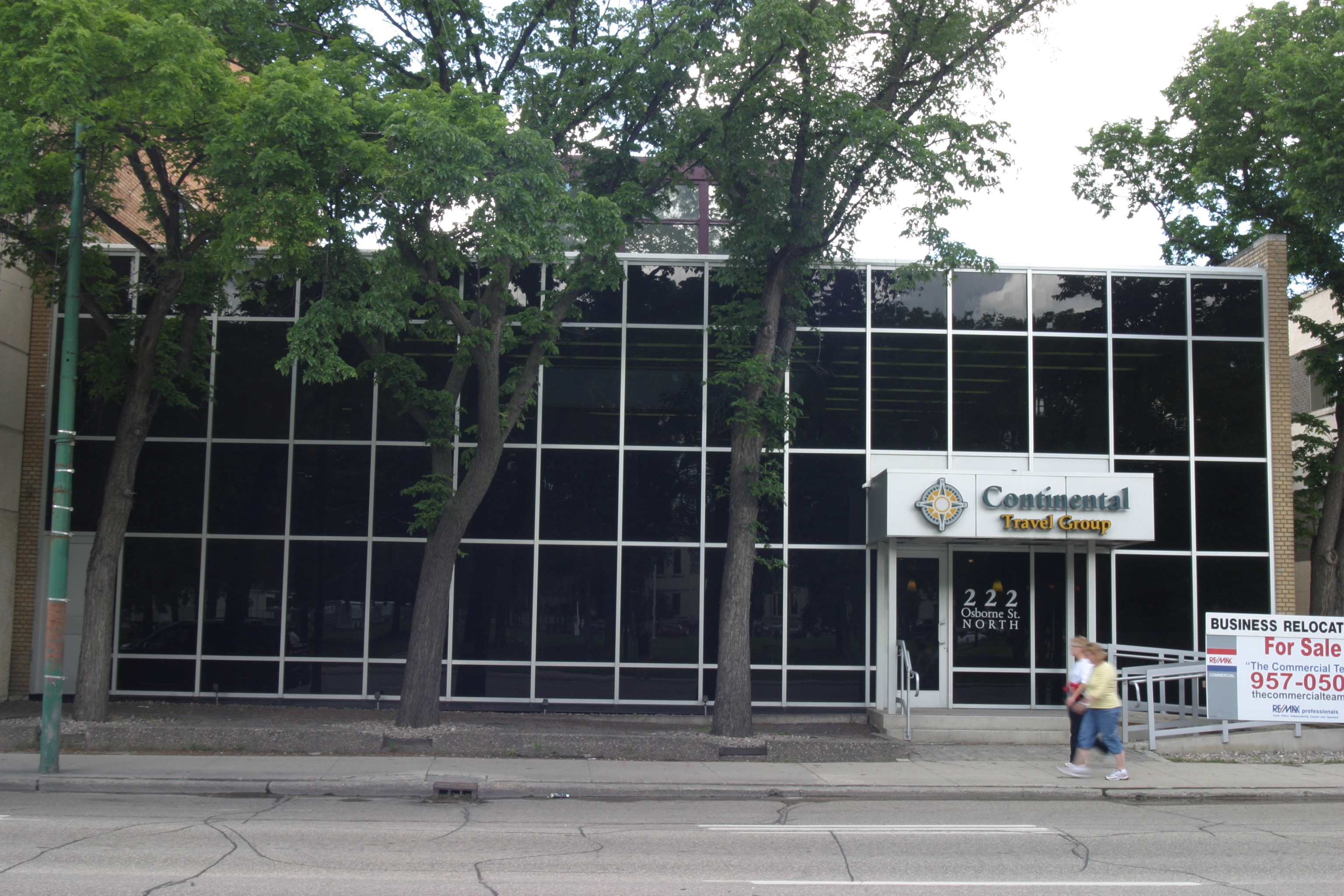 When architects Green Blankstein Russell built this office for their own use in 1951, they were interested in capturing natural light and evoking a feeling of spaciousness. One need only glance at the interior photo of their Portage Avenue offices in 1948 to see why--there were few windows and the staff were tightly packed into the space. Architect and critic John Graham wrote that the new office “was the first building in the city to show the influence of the work of Mies van der Rohe, a strictly functional curtain wall on the east and west elevations with a clean spartan look."

The design was an early example of a steel and curtain wall structure in Winnipeg. The new structural design was further enhanced by a modular framework of nine units (almost forming a cube) with the very centre module removed for a landscaped interior courtyard. When the building first opened, this courtyard held a 30-year old elm tree. Every bit of interior space was bathed in natural light. The conference room was located across the front of the building.

More space was soon required so a second storey was added by the original contractor, W.A. Irish Company in 1954. This maintained exactly the look of the original portion and, with the exception of a penthouse that rises from the courtyard space, brought it to its current size.

Green Blankstein Russell shared space for 15 years with Sumner and Piercy (later Sumner and Buckley), consulting engineers and frequent partners. By 1975, the firm had shortened its name to the initials GBR. G. Leslie Russell retired in 1966 and Cecil Blankstein became head of the firm. In 1983, the firm moved to 1314 Ellice Avenue and then to Waverley. Stantec Architecture purchased and absorbed GBR in 2004.

Since 1983, the building has been owned by a variety of private businesses. GBR made no substantial changes to the facade while it owned the building. Unfortunately, new owners have modified the original aesthetic of the 222 Osborne Street building through a series of renovations, both internally and externally.