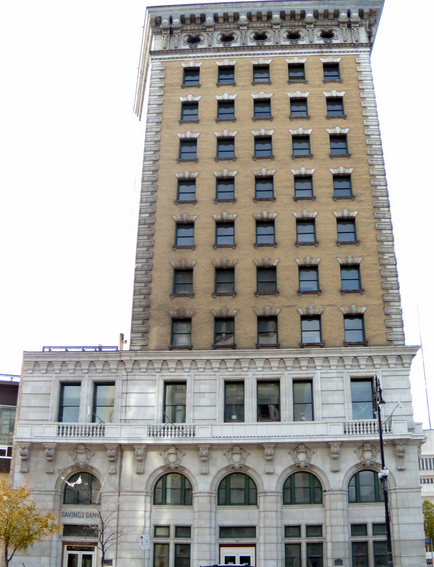 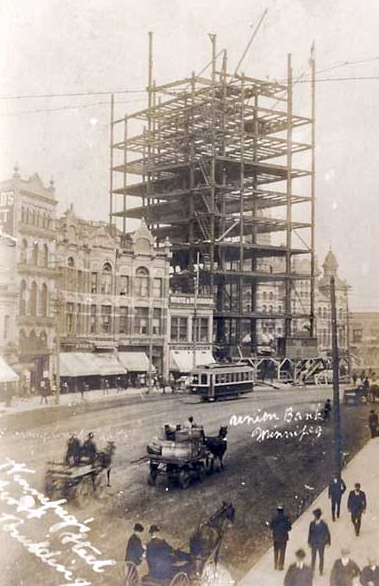 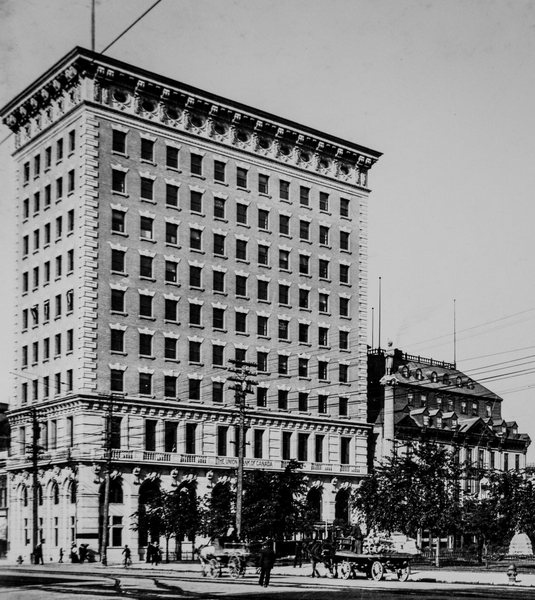 The Union Bank Tower is one of Western Canada’s oldest steel-framed skyscrapers. This new method of construction was initially shocking to citizens as they watched builders attach heavy materials to the tall thin structure. By 1925, the Union Bank Tower was the last remaining national bank headquarters in Winnipeg. Strangely, it was also the venue for the 1922 founding of the International Brotherhood of Magicians. After a turbulent financial period, the Union Bank merged with the Royal Bank and vacated the building by the 1980s.

The bank was designed by Toronto-based firm Darling and Pearson, Canada’s foremost bank architects of the time. This was a firm known for skillfully combining modern construction with historical styles. The terra cotta on the structure imitates a smooth grey stone and reflects a restrained Renaissance Revival style. It clads the lower two floors and is the material used for the heavy decorative elements around the windows (sills and voussoirs), the building’s corners (quoins) and the attic storey with its porthole windows. The ornate cornice is made of galvanized steel that was moulded and painted to resemble stone or terra cotta. The primary brick façade is punctuated by a grid of windows which was made possible by the new steel-frame technology. Decorative upper and lower sections with a mid-section of ordered fenestration is typical of the Chicago style from which the skyscraper originated. An annex was added to the building in 1921.

The original Union Bank sign on the tower’s south wall was painted over in 1925 when the Royal Bank of Canada merged with Union Bank to become one of Canada’s leading financial institutions. They operated out of that location until the 1990s, when the building was sold. Because of the heritage protections in place in the Exchange District, the Union Bank and Royal Bank ghost sign still exists today, albeit covered up with a removeable sign instead of paint. This sign is a great example of the longevity of paint on brick. The red used in this fading ad is over a century old, but looks as if it were added within the past decade.

Union Bank Tower sat empty until it was rehabilitated into the Red River College School of Hospitality and Culinary Arts in 2013. Prairie Architects designed the extensive conversion into a school and residence, reusing many of the existing quality materials, such as marble, found throughout the building. An addition that was built on the site of the former Leland Hotel (burned in 1999) doubled the building’s usable area. The rehabilitation further emphasizes sustainability with an upgraded envelope and recycling energy systems.