Mr. Stovel was born in Winnipeg in 1921 and attended the University of Manitoba from 1937-1941. His studies were interrupted by the Second World War.He served in the Armed Forces, first as a pilot with R.A.F. No. 139 (Mosquito Bomber) squadron, then instructed on Wellingtons for Transport Command and ferried Mosquitoes for No. 45 Atlantic Transport Group. He was discharged as a Flight Lieutenant and was awarded the Distinguished Flying Cross (D.F.C.)

He graduated from the University of Manitoba as Gold Medallist, Bachelor of Architecture, in 1947.Upon graduation, Mr. Stovel began his career with Frank R. Lount and Son Ltd. The company was active in the development of Silver Heights, a new residential community in St. James, and Mr. Stovel designed and supervised the construction of many of the homes in that development. He was also involved in the design of a number of apartment blocks for the company.

In 1968, Mr. Stovel left Frank R. Lount and established his own design and construction firm, A.B. Stovel Limited. Projects included numerous private residences in Tuxedo, River Heights, St. Charles and Charleswood, as well as summer homes in the Lake of the Woods area. Mr. Stovel was also involved in the design and construction of several commercial buildings in Winnipeg. 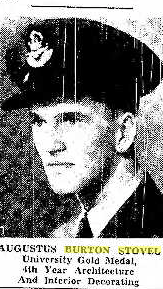