Akira Tamoto was born in Steveston, British Columbia. During the Second World War, his family was likely subjected to Canada's discriminatory anti-Japanese laws. These laws, instituted after the Japanese naval attack on Pearl Harbour on December 7th, 1941, allowed for the displacement of all people of Japanese ancestry away from Canada's west coast. Many were moved to interment camps in the B.C. and Alberta interior, financed through the misappropriation of internees' property (including homes, cars, and businesses) which was sold off by the government of Canada. A number of Japanese-Canadians would opt to work as low wage farm labour in central Canada instead, which would keep families from being separated. What course the Tamotos took is unclear. After the war, Akira was amongst a small number of Japanese-Canadians who chose to move to Japan. This was likely a difficult time, as Japan struggled to rebuild after the war. Here, Akira met his wife, married, and moved to Winnipeg.

Akira Tamoto would worked as a contractor with Fuji Builders & Contractors Ltd., eventually becoming president of the firm, a position he held until his retirement. He passed away January 14th, 2012. 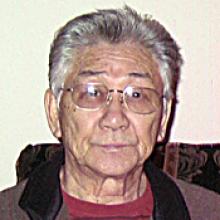