Douglas Simpson was born in Winnipeg in 1916.A fter studying architecture at the University of Manitoba (1932-1938). He was employed as assistant at several firms in Winnipeg in 1938-39, including Northwood & Chivers, A.E. Cubbidge, and for Green, Blankstein, Russell & Ham. He moved to Ottawa and worked for the R.C.A.F. Dept. of Works and Buildings (in 1940-41), then took a position in the office of the Chief Architects of the Dept. of Public Works (in 1941-42), and later joined the Royal Canadian Navy. At the end of the War, he joined the staff of the Building Research Division, National Research Council (1945-1947).

While he was there, he designed a moulded plywood nesting table and, with A.J. Donahue, developed a prototype for a moulded plastic stacking chair. Both designs were exhibited in Design in Industry at the National Gallery of Canada and on its tour across the country. While he was in Ottawa, he was also able to maintain his interest and involvement in building. The London-based journal, Decorative Art 1943-49 included a house on the Rideau River designed by Simpson and an apartment building in Hull, Quebec which he designed with J.S. Lefort.

In 1949, he partnered with Harold Semmens to form one of the most important modernist architectural firms in British Columbia, Semmens & Simpson. Buildings designed by the firm in the 1950s in Vancouver include: Hycroft Towers, St. Anselm’s Church, United Kingdom Building, the former Vancouver Public Library Main Branch, and BC Sugar Refinery Office. He was awarded a Massey Silver Medal for the latter two and a Massey Gold Medal for Marwell Building (demolished 1976).

Two houses designed by Simpson for himself were published in Decorative Art, England, 1950-51; and in Nuestra Architectura, Argentina, 1951. His second house featured an ‘inside-outside’ mural by artist John Koerner, as well as the couch and ottoman that are included here. (From the catalogue of an exhibition of Modernist Furniture and Design at the Canadian Craft Museum, Vancouver, 2002)

Simpson died in 1967 in Honolulu, Hawaii. 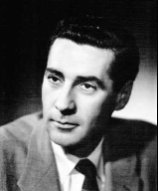