Hashimoto Construction Ltd. was founded by Hiro Hashimoto. The son of strawberry farmers from Mission, British Columbia, who were displaced during the Second World War. The family relocated to southern Manitoba in 1942, and came to Winnipeg in 1946.

From 1950 until 1987, Hashimoto’s firm designed and built residences in Tuxedo, Southdale, Charleswood, Fort Garry and Fort Richmond and throughout Manitoba. For many years Hiro Hashimoto was a member of the Winnipeg House Builders' Association. Examples from the 1950s include homes along Charleswood’s Willow Ridge and Harstone Road, some of which were marketed on a customizable “You Choose The Plan, We Build The Home” basis. Others were advertised as “ultra modern.” Hashimoto homes were routinely exhibited in Winnipeg’s annual "Parade of Homes,” including two homes from 1968: 54 and 58 Royal Salinger Road, both in the Niakwa Place neighbourhood. The first of these, a colonial style two-storey home, was promoted as featuring, along with a rec-room, custom-crafted cabinets. The second, described as a “contemporary styled bungalow” was said to possess an “indoor-outdoor theme” featuring balconies and patio doors.

Building custom homes was a common practice for Japanese-Canadian builders in Winnipeg. Many of these builders employed a skilled workforce (often bringing people from Japan) that would complete only four or five mid-to-high-end homes a year. Companies such as Fuji Builders employed more Japanese workers, but Hashimoto maintained close ties with Japanese Canadian companies in architecture and building. Most of his projects involved electrician Michael Kojima of Goodman & Kojima Inc., and he worked with Stan Osaka and Jim Yamashita of IKOY. Hiro's brother, Ben, also built a dozen or so homes on speculation in Winnipeg's Westdale development under Ben Hashimoto Builders.

Much of Hashimoto's success can be attributed to the Winnipeg developer Ladco, which parcelled out projects to its member builders in areas such as Southdale and Niakwa Place. Amongst his more prestigious projects was the home of Sheldon Berney of Reliance Products Ltd., at 427 Park Boulevard East. The home, with its many dynamic elements, was designed by Winnipeg architect Etienne Gaboury, and was challenging to build. Hiro also worked with Willis Herman "Will" Richard, a residential architect who regularly worked with Qualico Ltd. and specialized in infill housing.

Hiro was well liked by the tradesmen who he employed. In the 1960s, it was common for amateurs to open construction firms, and often, tradesmen would only be paid for a portion of their work, if it all. Conversely, Hiro paid his workers during and after a project was complete, a practice that was greatly appreciated.

Hashimoto Construction saw their number of projects dimish in the 1980s as low-cost, high priced, tract housing cut into the demand for custom homes. Hiro Hashimoto retired in 1987. 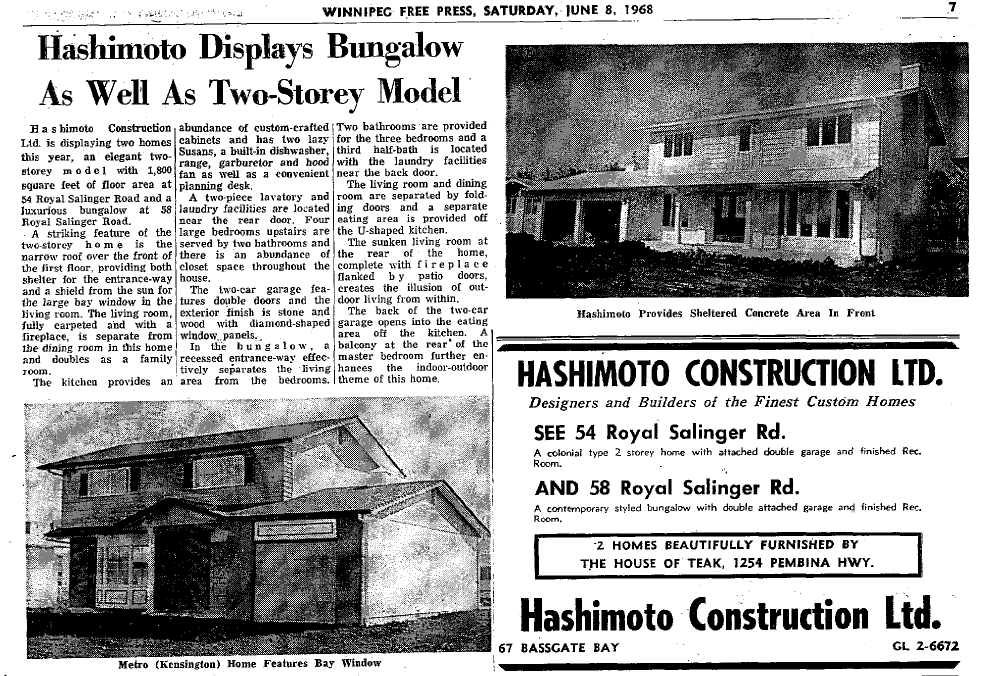