James Palmer Lewis was born in April of 1918 in Morris, Manitoba. When duty called during the Second World War he joined the Canadian Army in 1940, switching to the Air Force in 1943. Upon returning from overseas he finished his education and enrolled in architecture at the University of Manitoba. His 1950 thesis, "A Study of Forces Influencing the Design of a House for the southern Manitoba Region", was a departure from standard thesis of the time and helped launch a career of designing buildings to cope with the harsh cold and glaring heat of the Canadian prairies. In 1954 Jim studied under Frank Lloyd Wright, the groundbreaking American architect, at his design schools "Taliesin" in Wisconsin and "Taliesin West" in Arizona. Steeped in Mr. Wright's philosophy of organic architecture, which spurned Victorian excess in favour of practical human-oriented and environmentally sensitive design, Jim designed houses from Pennsylvania to British Columbia, as well as many public buildings.

Jim lived in Winnipeg practicing architecture as an employee, a partner, and out of his own office for many years. He taught architecture at the University of Manitoba for nearly 20 years. After his retirement he moved back to Morris where he designed and built his own home. He passed away in October 2003. 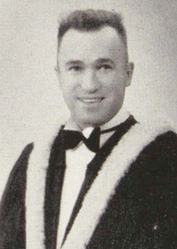