Born in 1945 a John Petersmeyer grew up on a farm south of Regina the second of three sons. The family’s summers were spent in California, where his parents designed, built and sold homes. Petersmeyer entered studies at the University of Manitoba, graduating with a Bachelors of Architecture in 1969. During his schooling the young designer obtained multiple summer positions within the field, including a term with Bird Construction in Regina, a period with a Regina architect during his second year, employment with architect Leo Lund in West Vancouver; and – following his fourth year of study – a role at Fairfield and Deboyce in Toronto. Looking back to his schooling and the early phase of this career, Petermeyer described the University of Manitoba as “a Mecca in the late 1960s for the best and brightest’ with Dean John A. Russell “challenging the students with a broad speakers program.”

Subsequent to his graduation, the architect was hired by the notable Winnipeg architecture practice Green, Blankstein and Russell (GBR). At this time the firm was proceeding from such accomplishments as the 1964 Winnipeg City Hall and had earned a reputation as an prominent office with modernist bona fides. Petersmeyer has identified himself as a member of the “third generation” of this practice and here worked with such figures as City Hall designer Bernard Brown. Amongst the early projects he took on while with GBR include design work at the University of Brandon. Later assignments include a number of buildings in Northwestern Ontario and airports in Antigua and Trinidad. Petersmeyer was later the design architect for the Rady Jewish Community Centre (123 Doncaster Street, 1997) and Architect-of-Record for the Winnipeg James Armstrong Richardson International Air Terminal Building (9071 Wellington Avenue, 2011; with Pelli Clarke Pelli Architects). GBR was acquired in 2004 by Stantec Consulting, which Petersmeyer remaining as principal.

John Petersmeyer retired in 2010. Beyond his architectural practice, he has served as the president of the Manitoba Association of Architects and on a number of boards including those of the Unemployment Insurance Commission, the Health Services Commission Advisory Council, the Royal Manitoba Theatre Centre and the Canadian Museum of Human Rights. 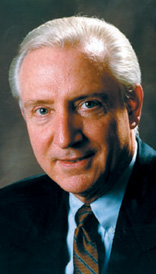