Lawrence John Green was a prominent member of Winnipeg’s architectural community most remembered for his role in founding the firm of Green Blankstein and Russell. Green was born July 17, 1899 in Winnipeg. From 1916-19 Green served in the First World War effort, first with the Canadian Expeditionary Force and then with the Royal Air Force. Following this period, Green returned to Winnipeg, where he attended the University of Manitoba, graduating with a bachelor’s degree from the Department of Architecture in 1926. At that time the school was led by the American- and French-trained Arthur A. Stoughton, a New York emigre who founded the architecture program in 1913.

Green moved to Chicago not long after graduating. He worked with three offices: Zachary T. Davis (from May 1926 to June 1927); Oman & Lilienthal (from June 1927 to November 1928); and Maurice L. Being (from November 1928 to May 1929). In July 1929, Green returned to Winnipeg, where he was hired to work with the prominent local office of Northwood & Chivers, a role he held for one year. At that point Green joined with his former professor, Arthur A. Stoughton, who was involved in a number of projects, including an unbuilt skyscraper for the Richardson family at the corner of Portage Avenue and Main Street, as well as two buildings on the University of Manitoba Fort Garry campus. Green worked with Stoughton until the summer of 1932. He registered with the Manitoba Association of Architects during this period, in 1931.

In 1932, after moving on from his work with Stoughton, Green joined with Cecil N. Blankstein – a fellow graduate of the University of Manitoba – to form the partnership that would grow to become Green Blankstein Russell Ham with the addition of partners G. Leslie Russell and Ralph Ham in 1934.

Founding a new firm during the early years of the Depression was a bold venture. Work came in the form of low-cost housing schemes intended to alleviate the hardships of the Depression both for builders and inhabitants of substandard residences. Despite much press, the firm’s plans (which included a multi-block development north-west of Winnipeg’s downtown at a cost of $1.7 million) went unbuilt. Projects the group did tackle during this period included the 1934 Sisters of Charity Provincial House and 1937 St. Boniface Home for the Aged & Infirm (151 Despins Street; now Résidence Despins), as well as many theatres built across Manitoba and Western Canada. Green served as president of the Manitoba Association of Architects in 1934 and again in 1937.

During the Second World War, Green Blankstein Russell ceased operation; it also lost partner Ralph Ham, who passed away in 1942. At this time the firm’s partners were involved in such war-era work as the construction of the HMCS Cornwallis in Nova Scotia, the largest naval training base in the British Empire. Green himself remained in Winnipeg and worked as District Engineer for the Royal Canadian Navy.

From the mid-point of the twentieth century onward Green Blankstein and Russell would establish itself as one of Canada’s leading modernist architectural offices, winning such notable competitions as the 1953 National Gallery contest and that held for the design of Winnipeg City Hall in 1958. The 1960s would be an even more successful decade for Russell and his office, with the city hall’s construction and the office’s involvement in the design of the adjacent Centennial cultural area, in co-operation with fellow Winnipeg architectural practices Moody Moore Architects and Smith Carter Architects. Green served as president of Green Blankstein Russell & Associates Architects and Engineers until his retirement in 1961.

For much of his life, Green lived at 495 Lyndale Drive, in Winnipeg’s Norwood neighbourhood. Green was named a Fellow of the Royal Architectural Institute of Canada 1957; he also served as a Master of Norwood’s Masonic Lodge, having been a 32nd Degree member of the Scottish Rite of Freemasonry. He was also a member of the Royal Order of Scotland. In addition, Green served as a member and past Vestryman of St. Philip's Anglican Church in Norwood. He passed away May 17, 1969 at St. Boniface General Hospital. 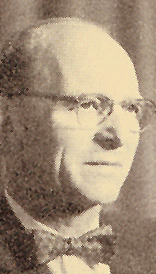