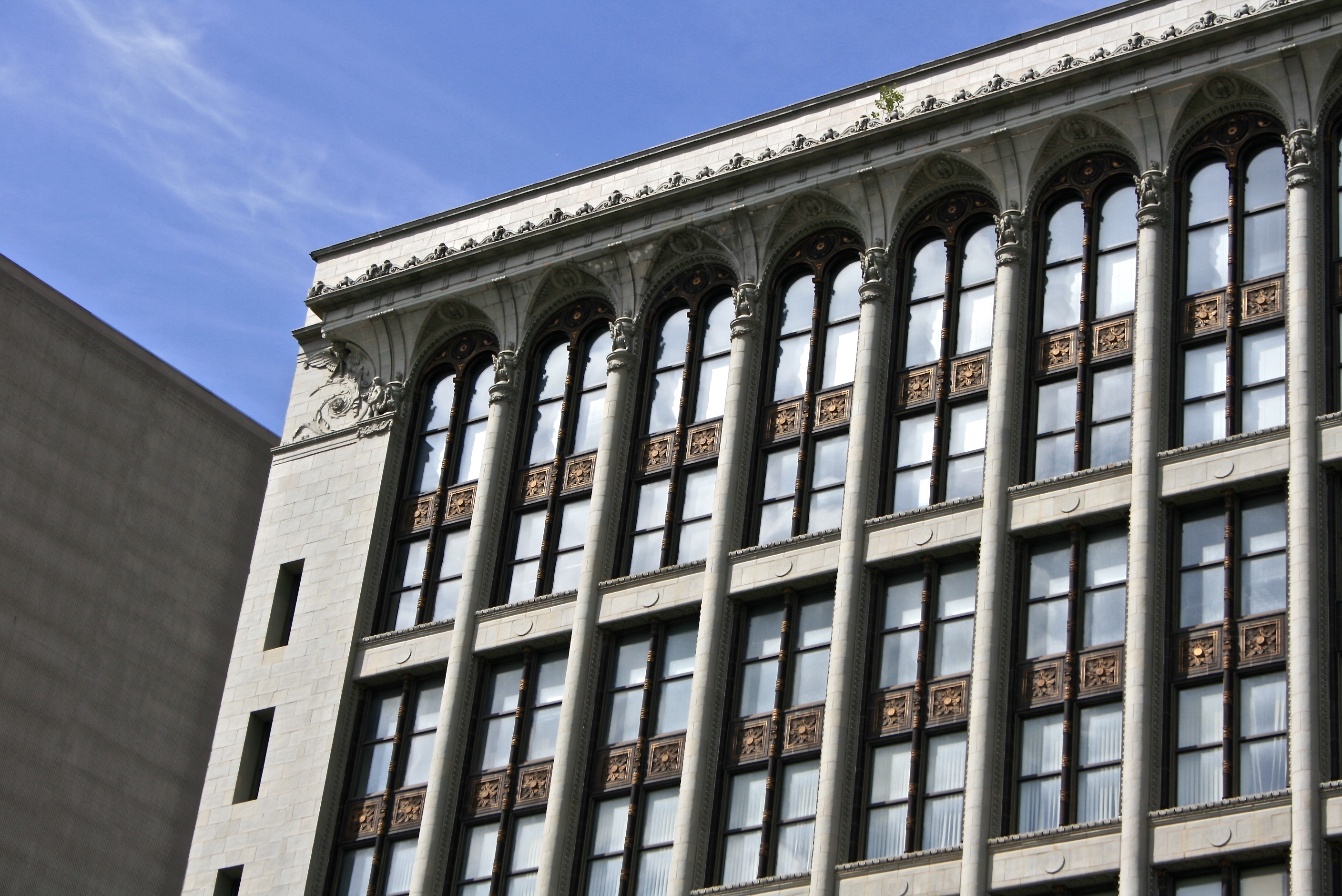 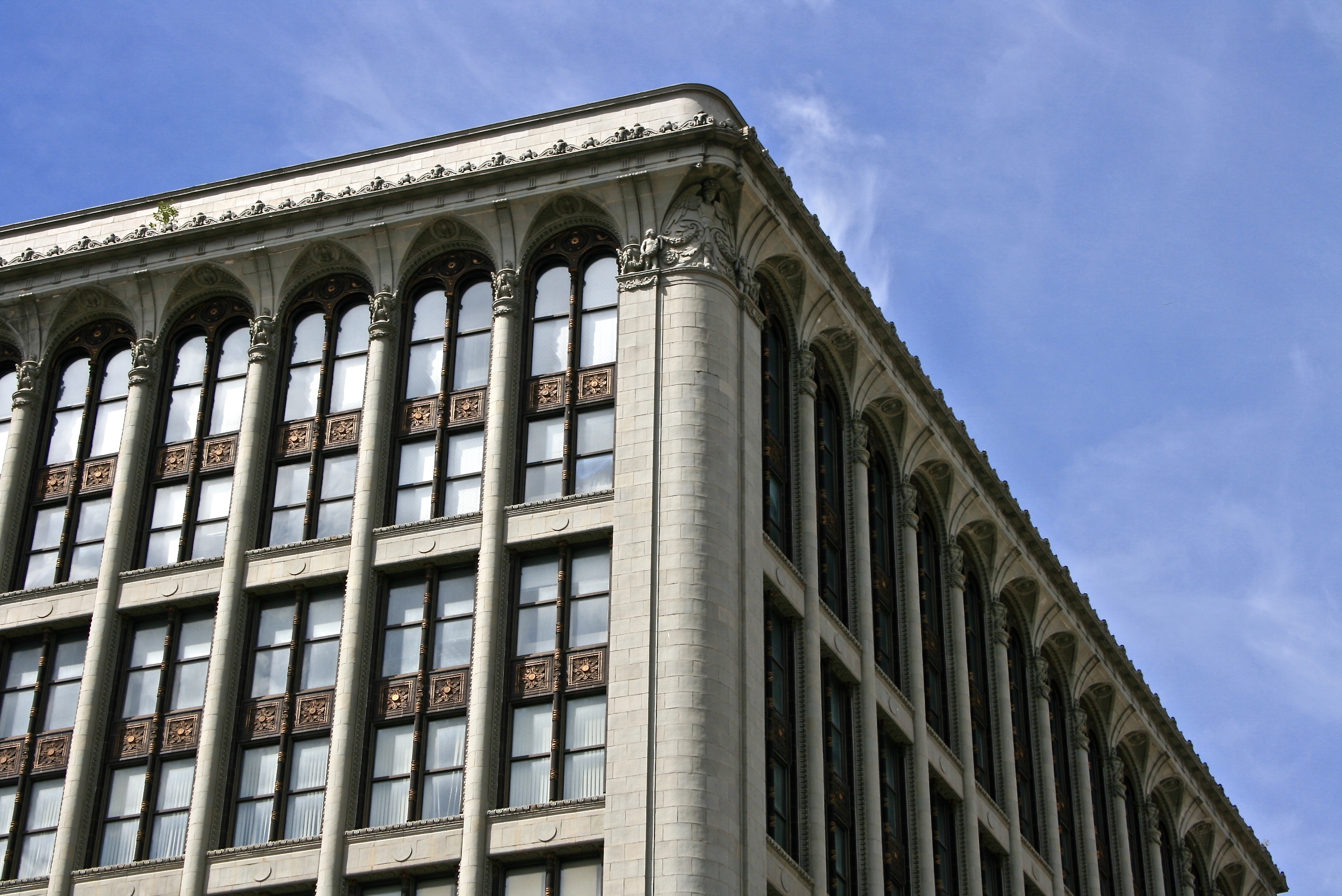 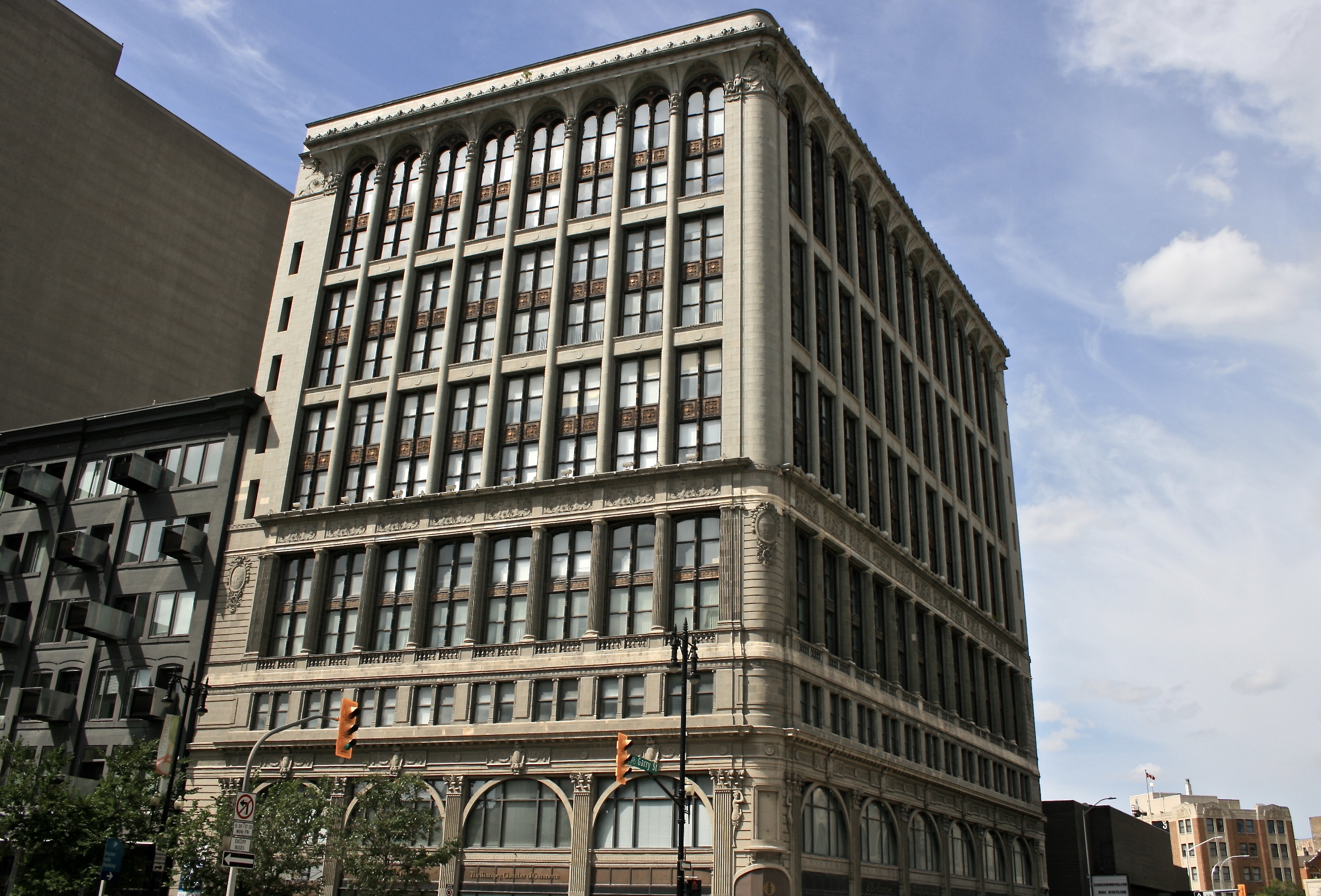 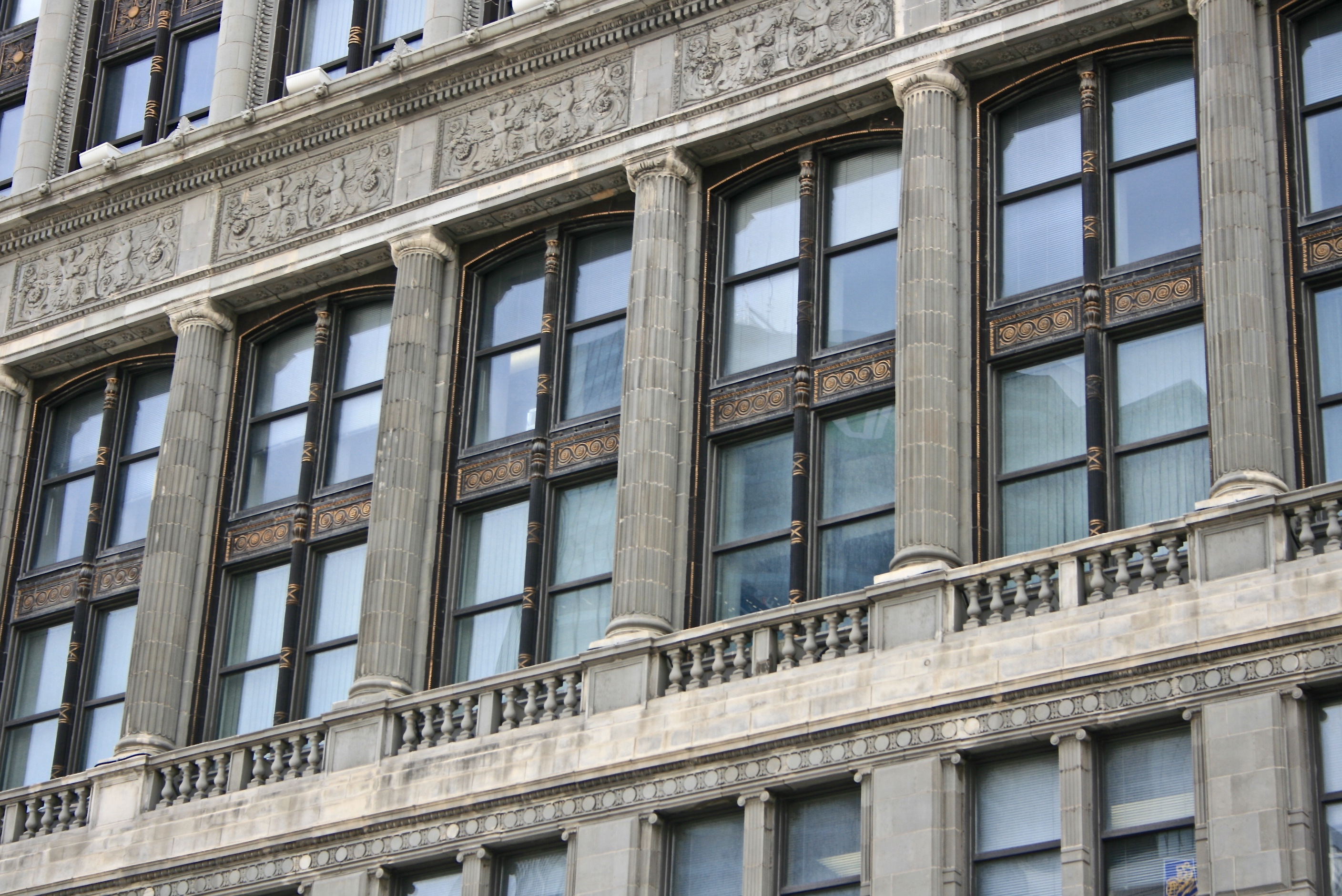 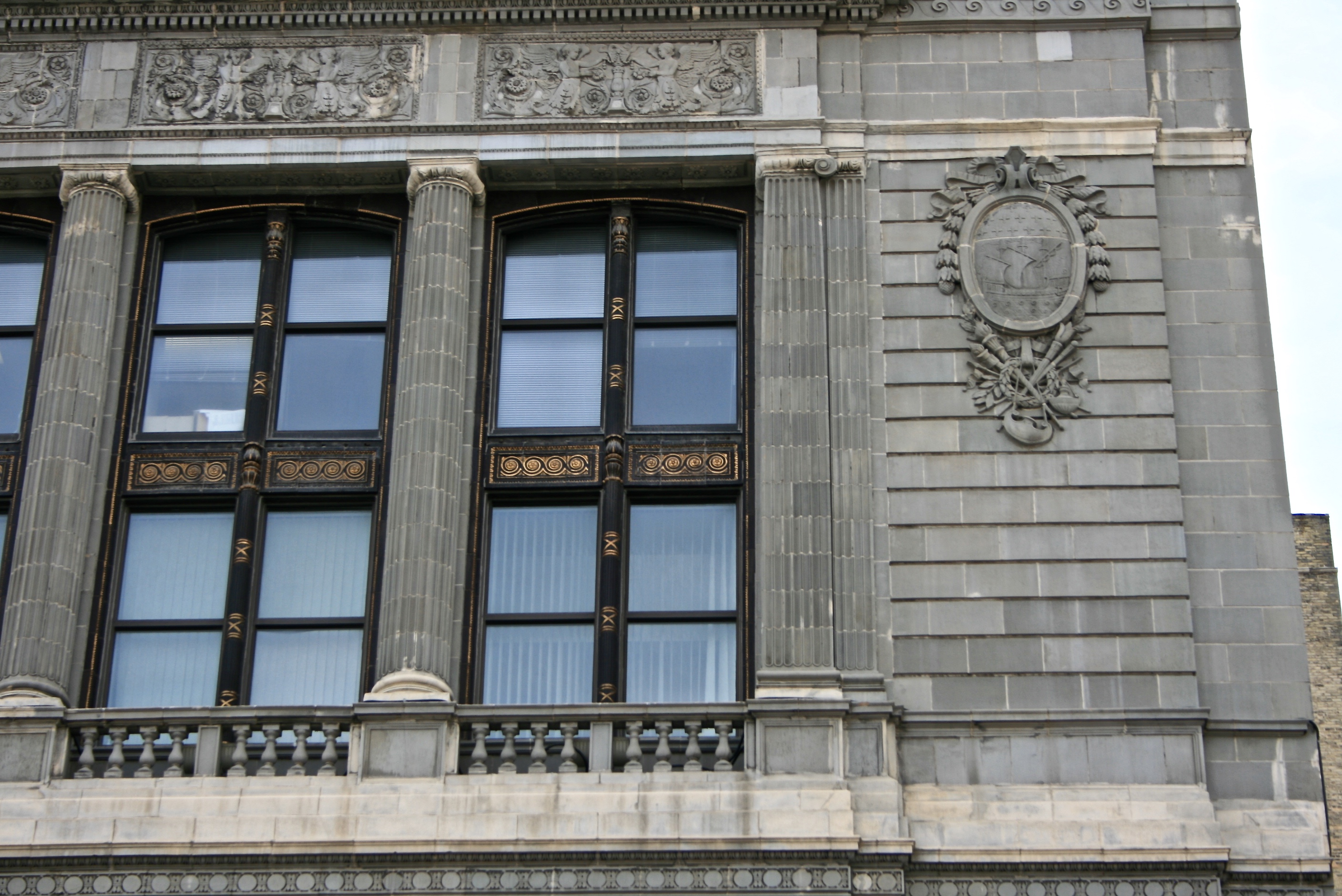 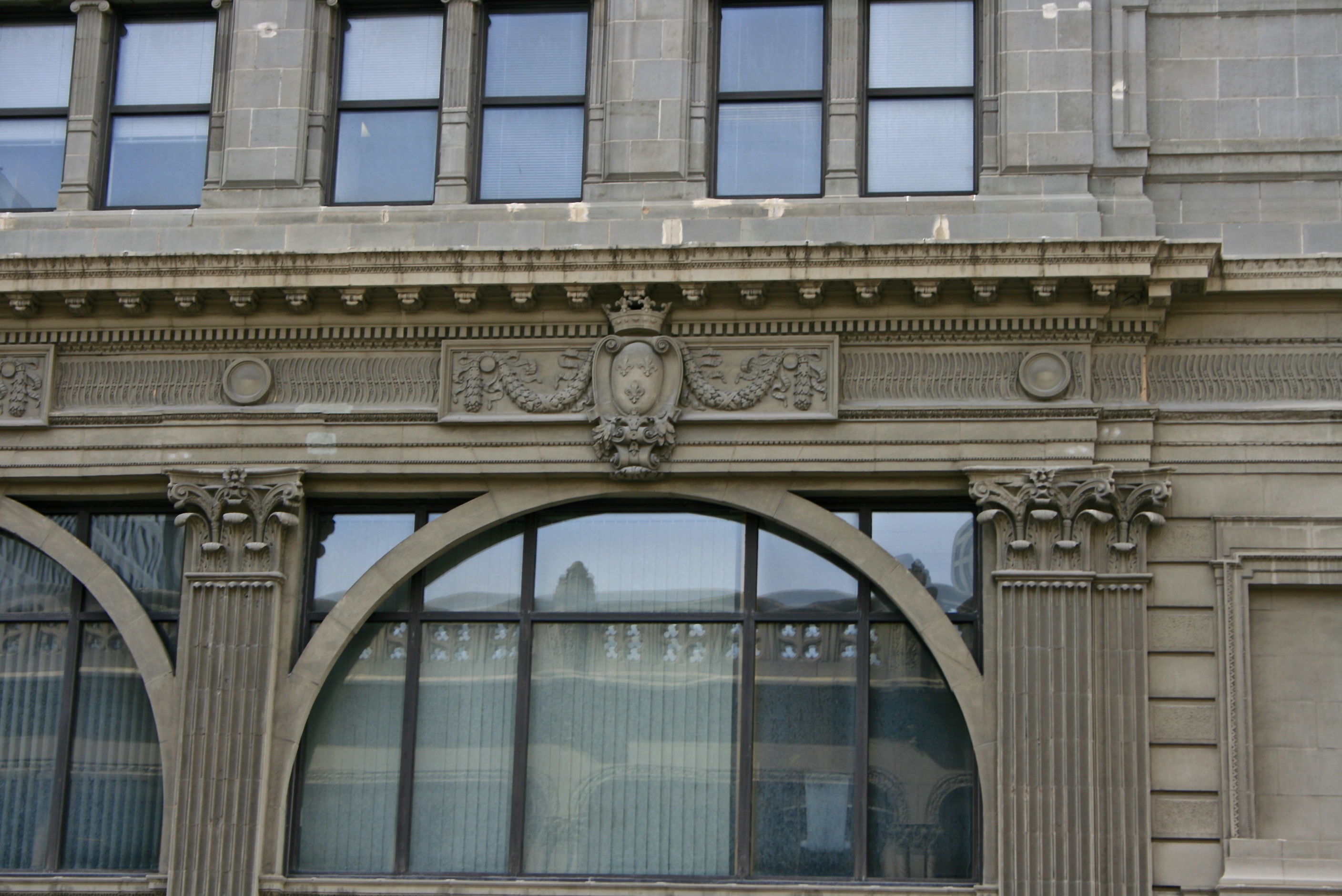 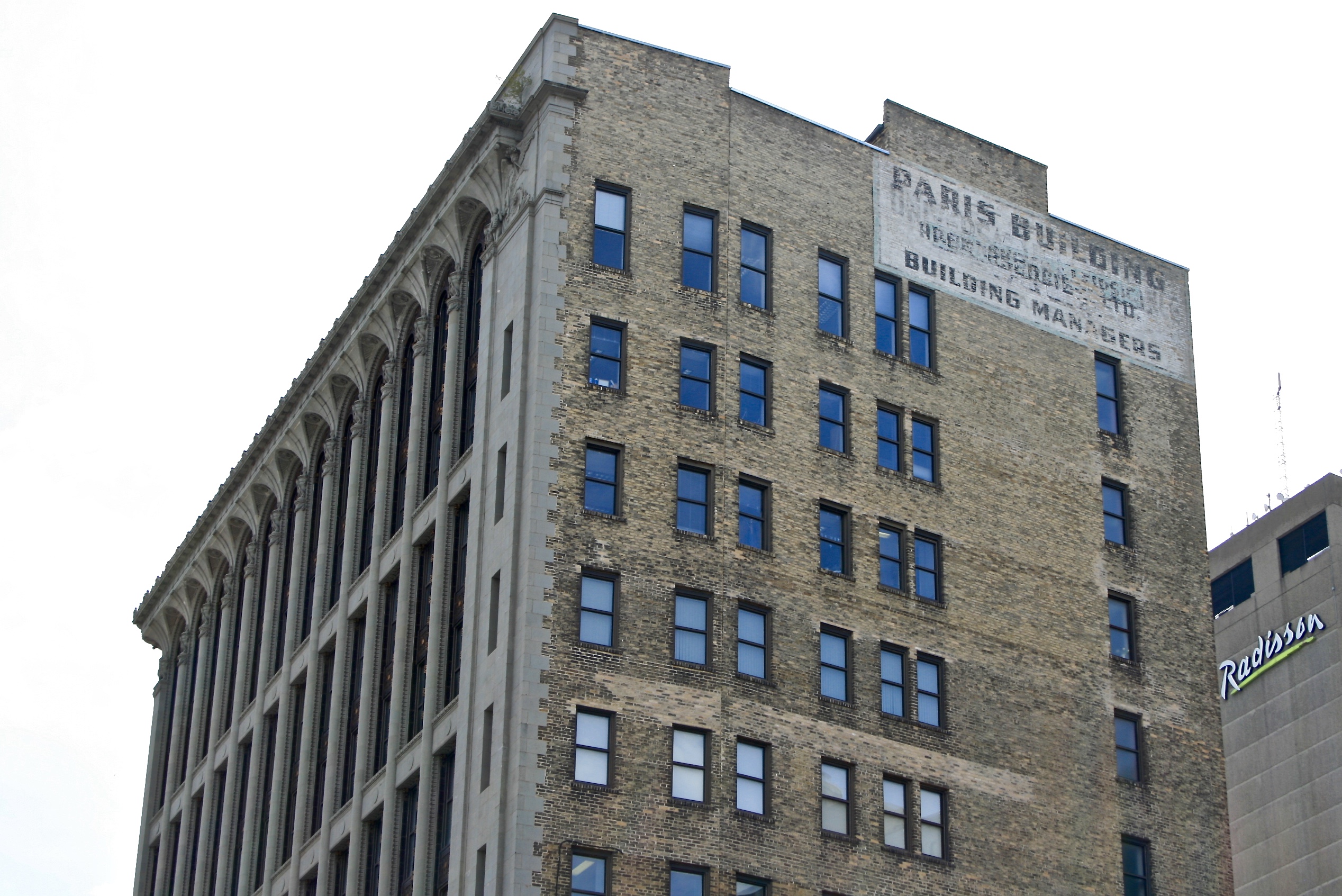 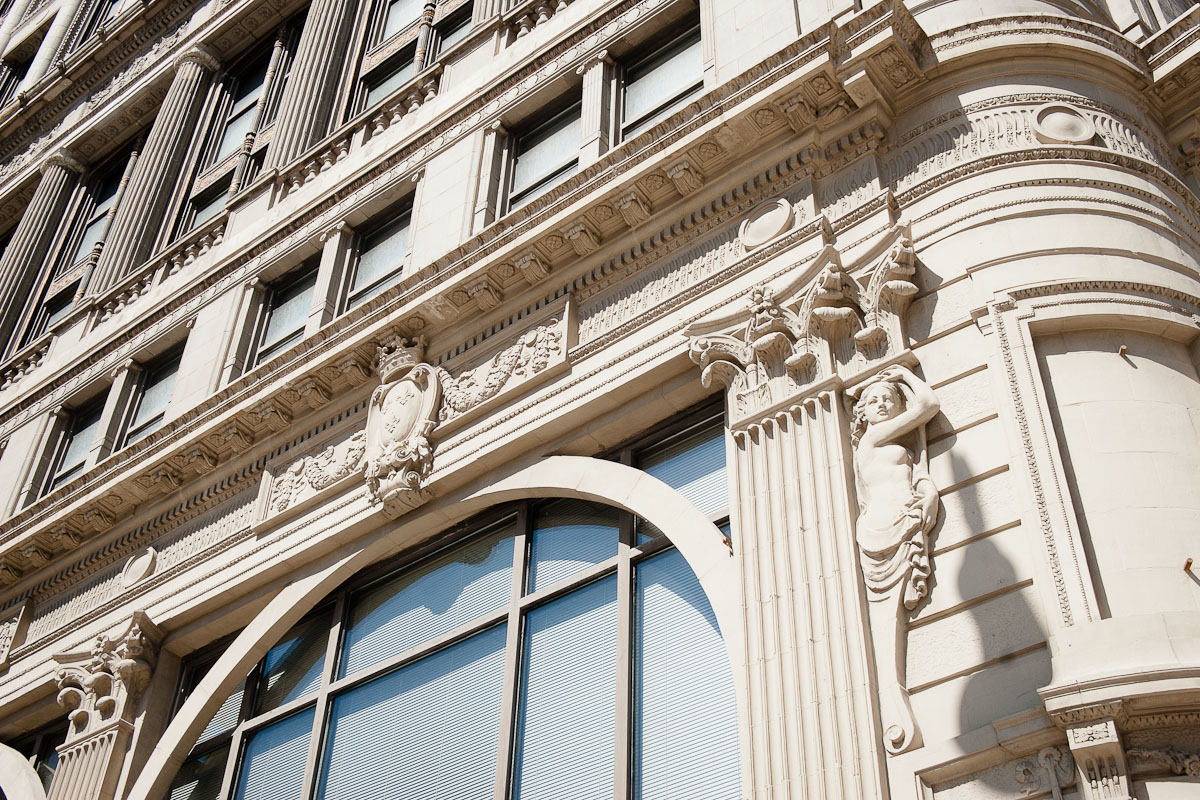 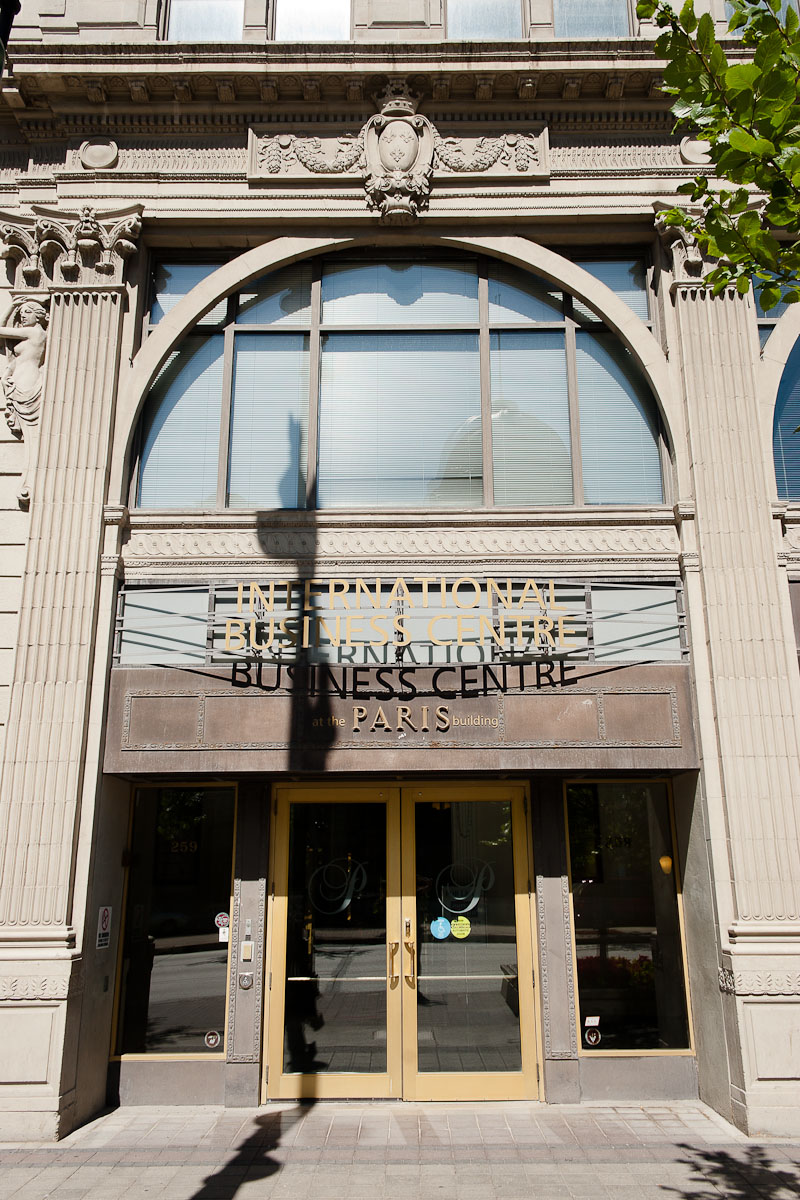 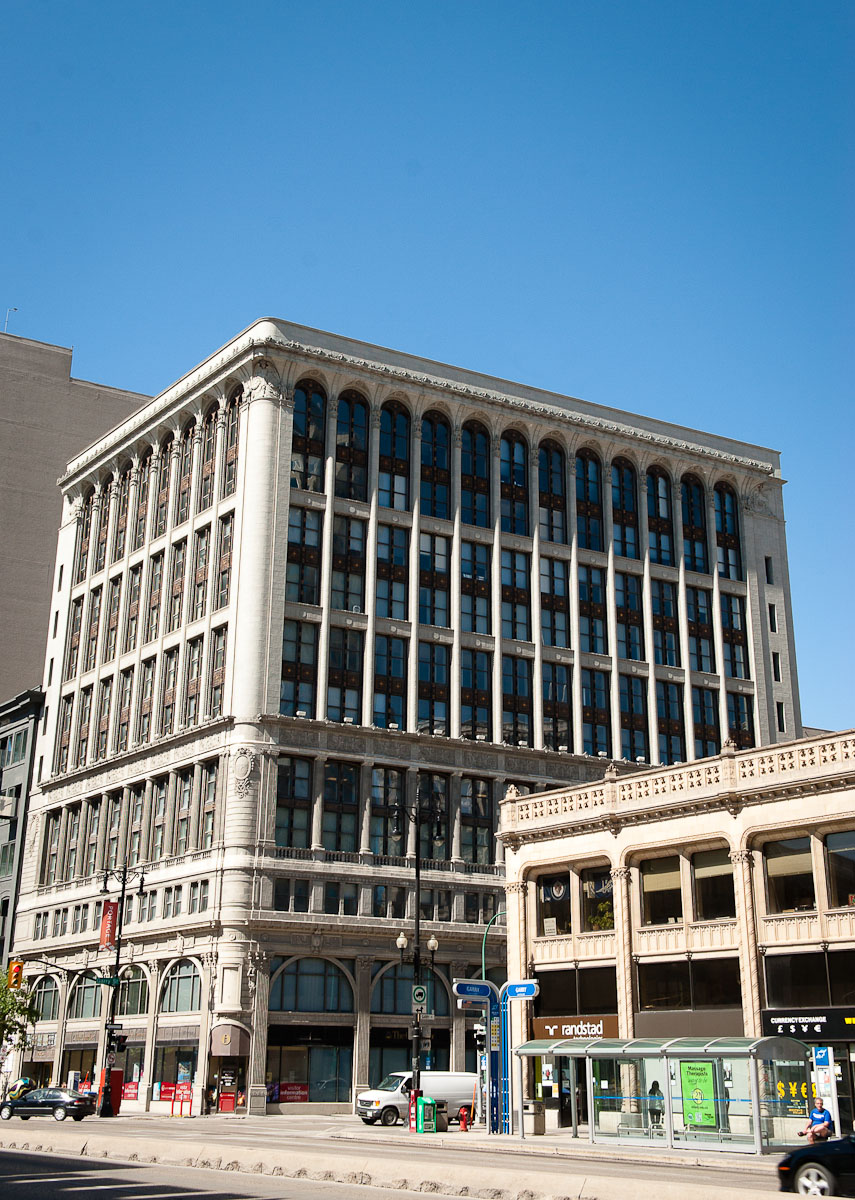 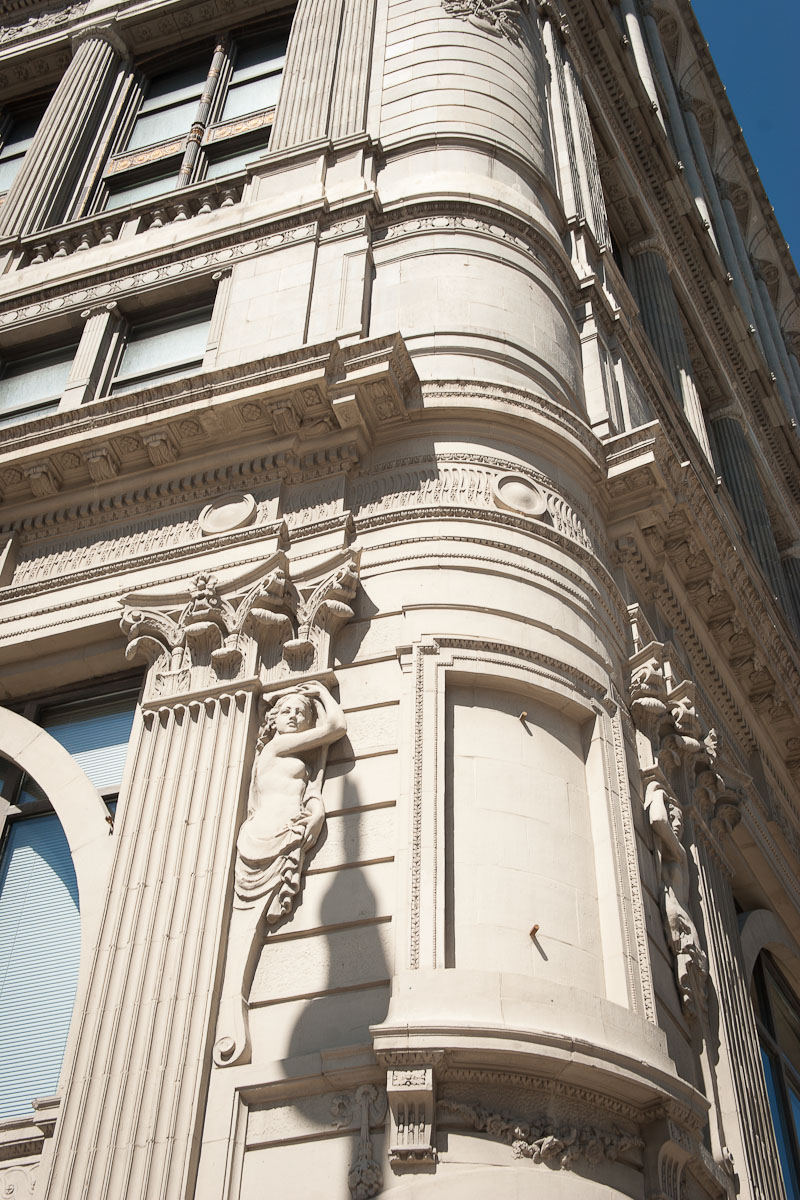 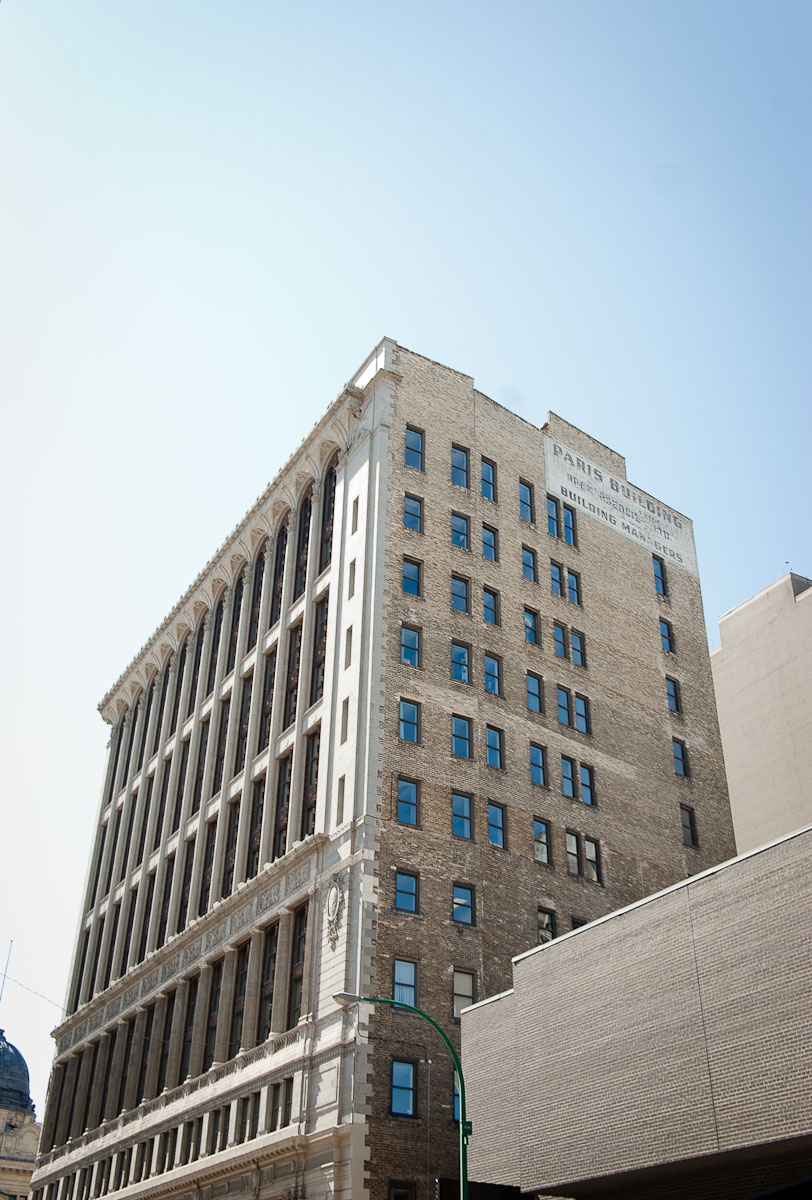 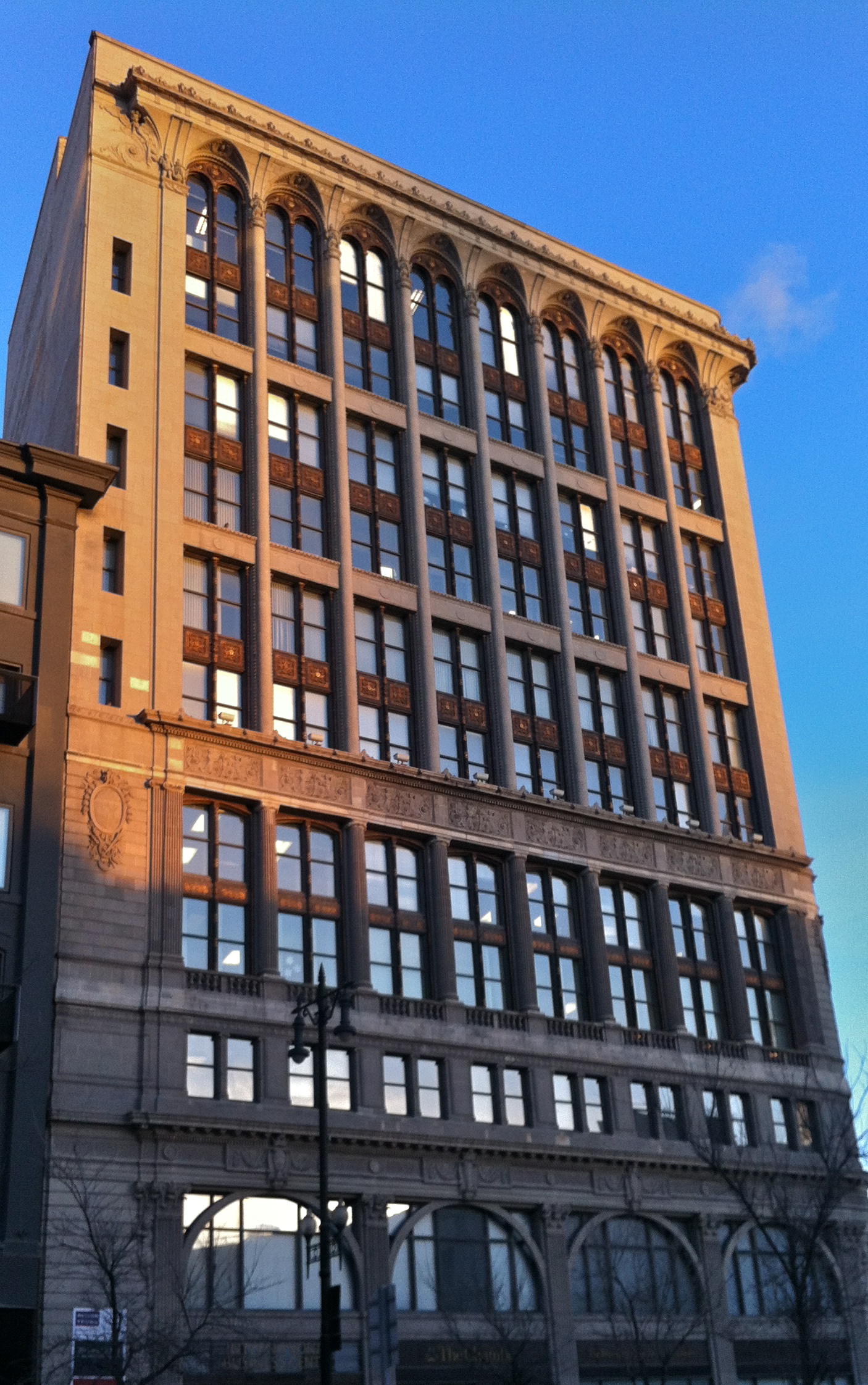 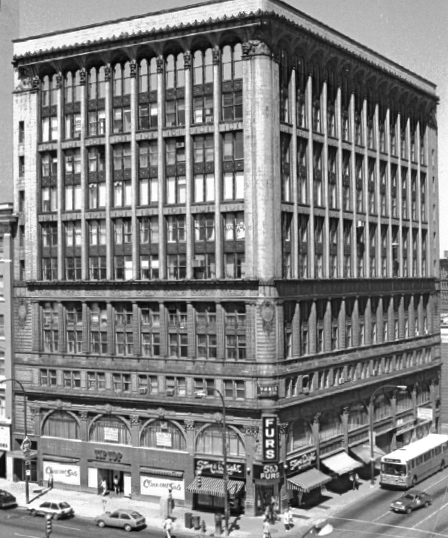 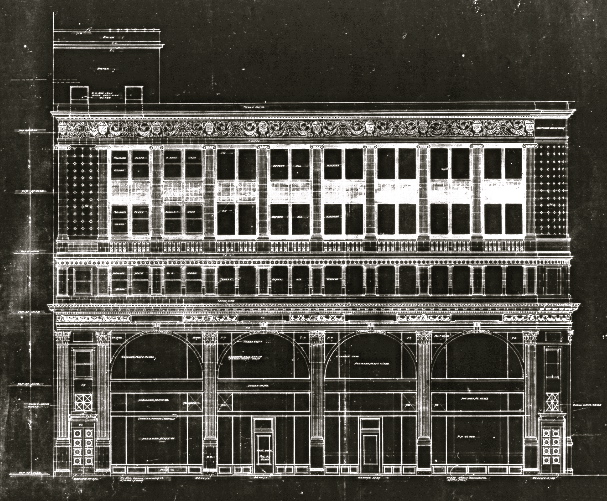 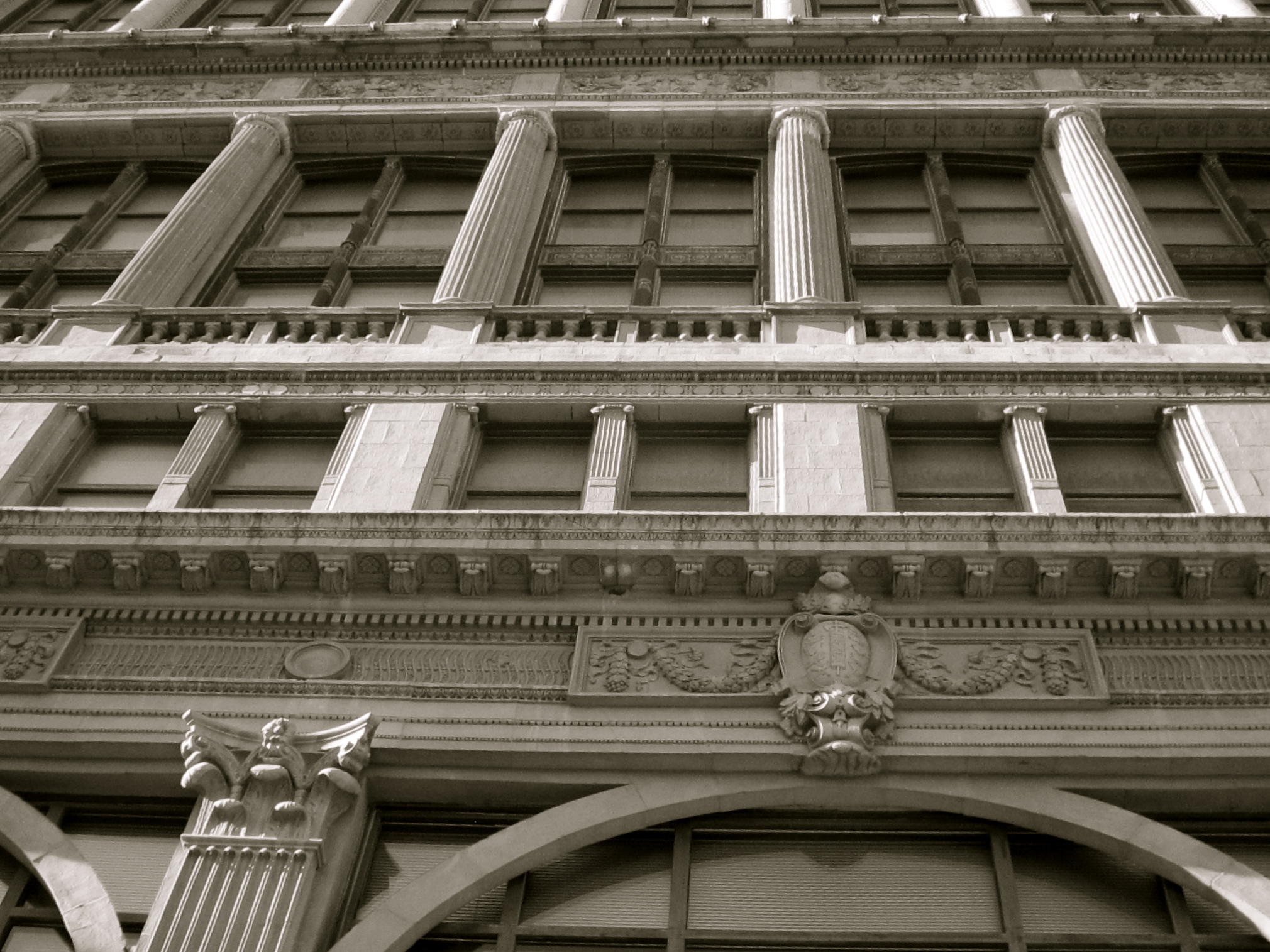 A refined and soaring presence along Winnipeg’s Portage Avenue, the Paris Building has served as a key architectural landmark in the city’s core for nearly a century. Described by historian Bill Thompson as Winnipeg’s “most elegantly clothed steel frame skyscraper” (Thompson, Winnipeg Architecture: 100 Years, 16) the structure is remarkable in a number of ways. Among these is its sense of harmony, a distinction which might surprise given the fact that the project was designed and constructed in two phases. The first of these, taking place in 1915, saw five storeys erected; the second stage, in 1917, saw the six upper floors raised. The architects of the building, John Woodman and Raymond Carey, seem to have had this doubled process in mind from the beginning. The block was constructed by the firm of Carter-Halls-Aldinger at a price price of $330,000; the developer was L. Honnovat.

The origin of it the Paris Building’s name is somewhat uncertain; however, its decoration is certainly French-inspired. The building is another fine example of terra cotta cladding and ornament resembling cut and carved stone. Above the second floor, a series of shields bearing fleurs-de-lis and topped with crowns decorate the large, repeating arched windows. Above the fifth floor (once the top of the building), are panels of angels. Bare-breasted women at the second floor corners are no angels (they have no wings) but, at the very top corners of the building, beneath the deeply vaulted cornice, are winged creatures with curious (and, arguably sinister) faces. The vertical emphasis of the building is not marred by the fact that it was built in two phases. The six-storey addition features cast iron and gilded detailing.

The design of the Paris Building reflects period trends in the composition of skyscrapers, most notably those formed by the Chicago School of architects. Among the aspects of the structure which echo this movement are its resolute verticality, a quality particularly imbued via the use of elongated and slender piers. In this respect the Paris Building parallels the thinking of pioneering American architect Louis Sullivan, read by many as a key figure in the development of modern architecture. In an article of 1896 "The Tall Office Building Artistically Considered" (Lippincott's Magazine, March 1896) Sullivan advanced his notions for the proper design of the modern tall building; these included many elements replicated by this Winnipeg example: tripartite composition (comprised of base, shaft and attic sections), and the emphasis of height. Sullivan’s phrasing – that the skyscraper “must be tall, every inch of it tall ... The force and power of altitude must be in it the glory and pride of exaltation must be in it” – encapsulates much of what makes the Paris Building an outstanding work. At the same time, in this Winnipeg building this sense of verticality arises as well from an exterior design which combines elements of various revival styles. Neo-Classical Corinthian and Ionic pilasters are located on the lower floors, with exaggeratedly tall pilasters above; these latter devices echo the neo-Gothic in their height and slenderness, but are topped by decorated Tuscan capitals. A sense of rich embellishment further permeates the façade through the aforementioned extensive sculptural ornamentation, with the composition topped by the dramatic and dignified cavetto cornice.