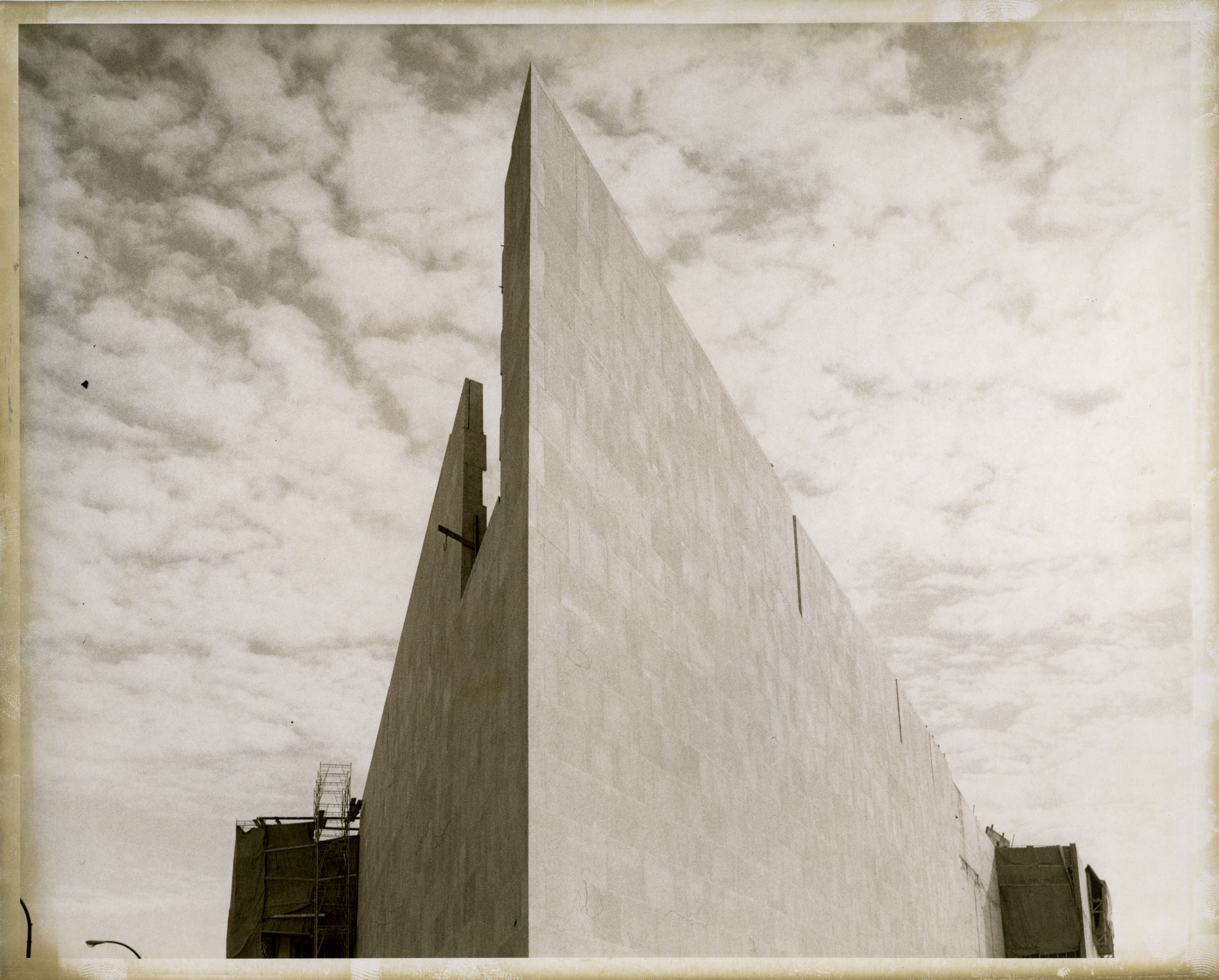 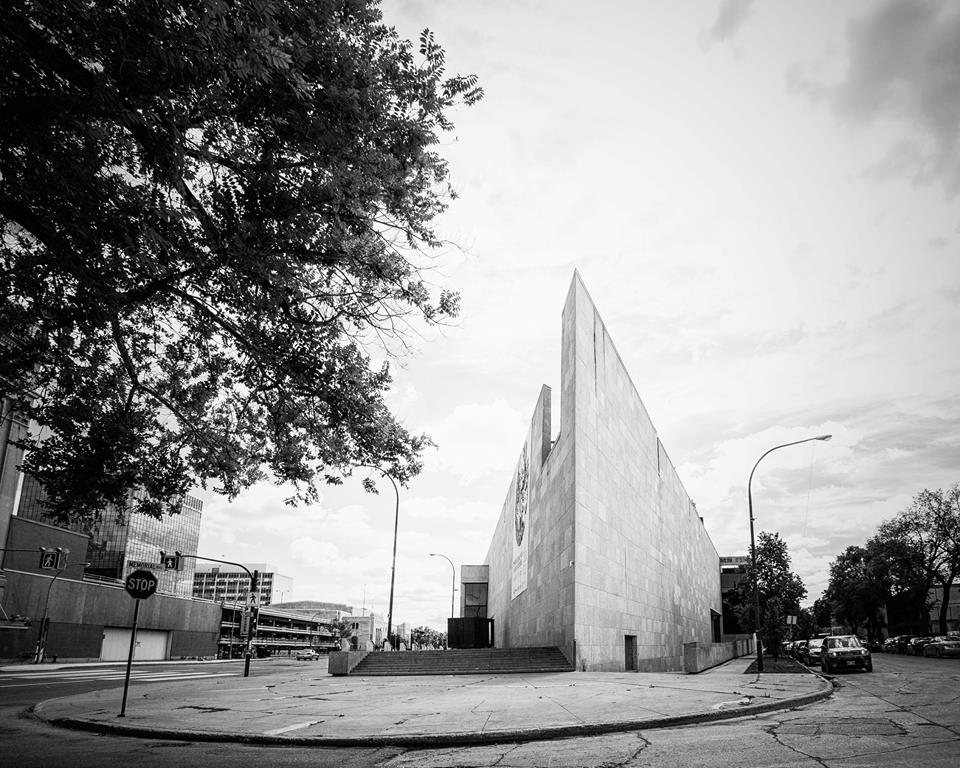 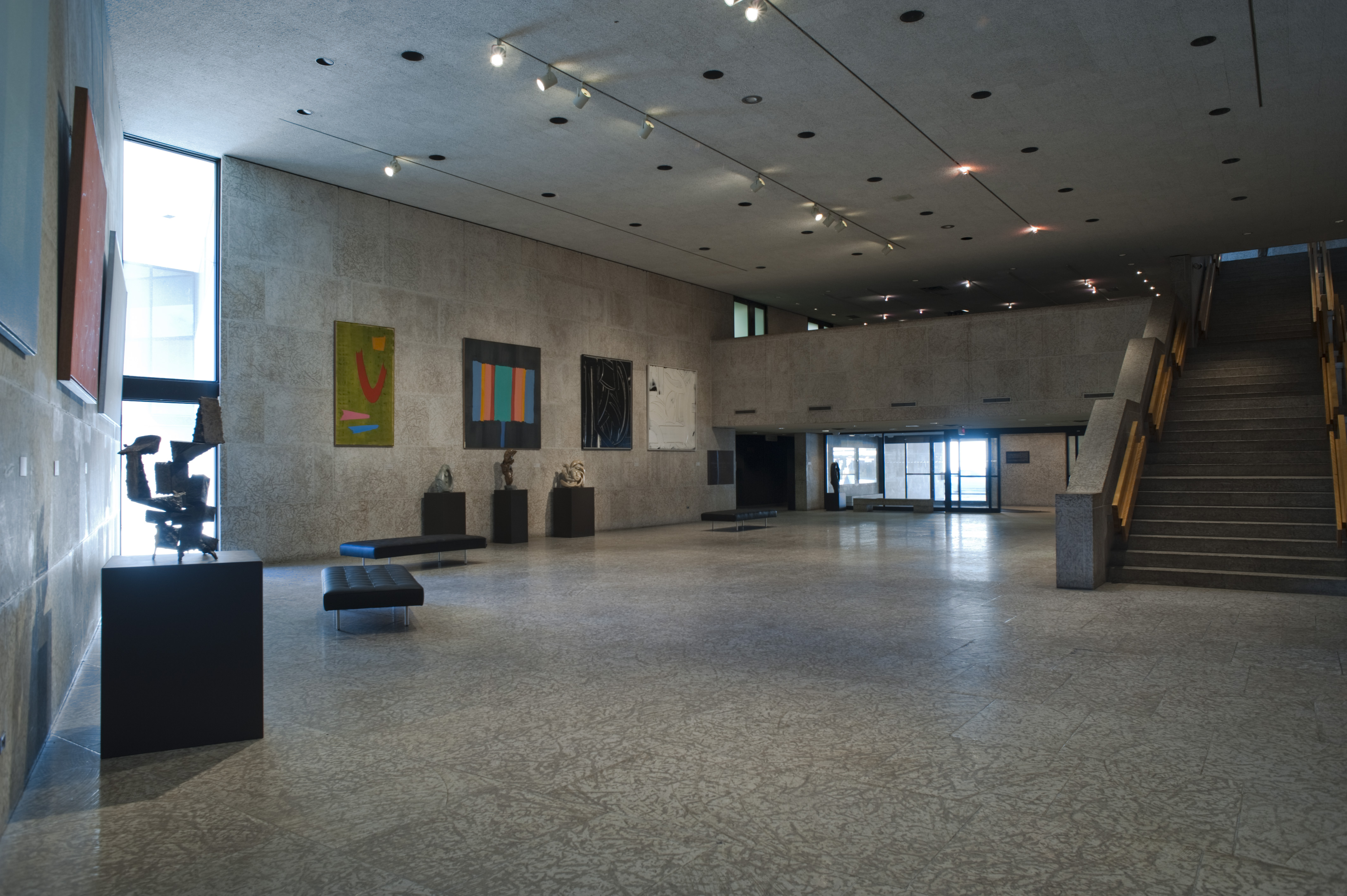 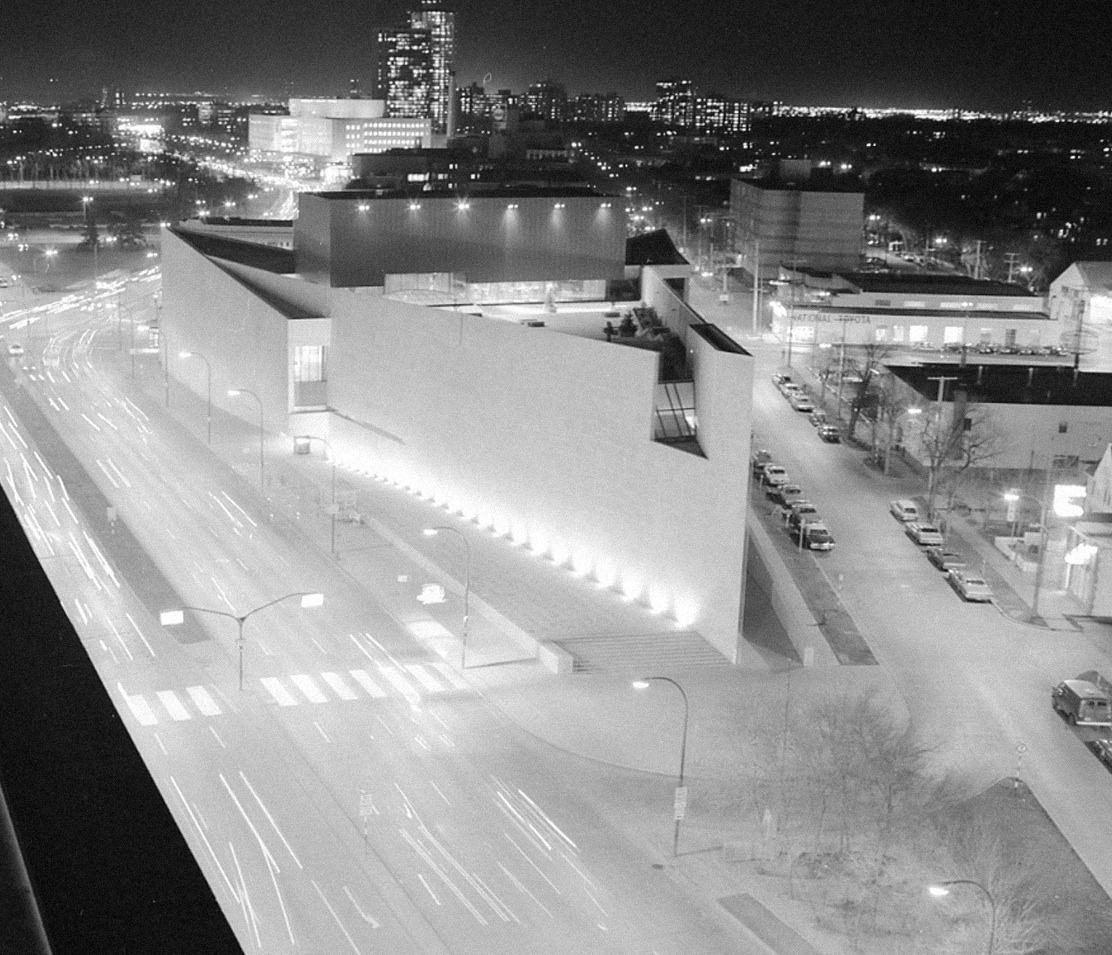 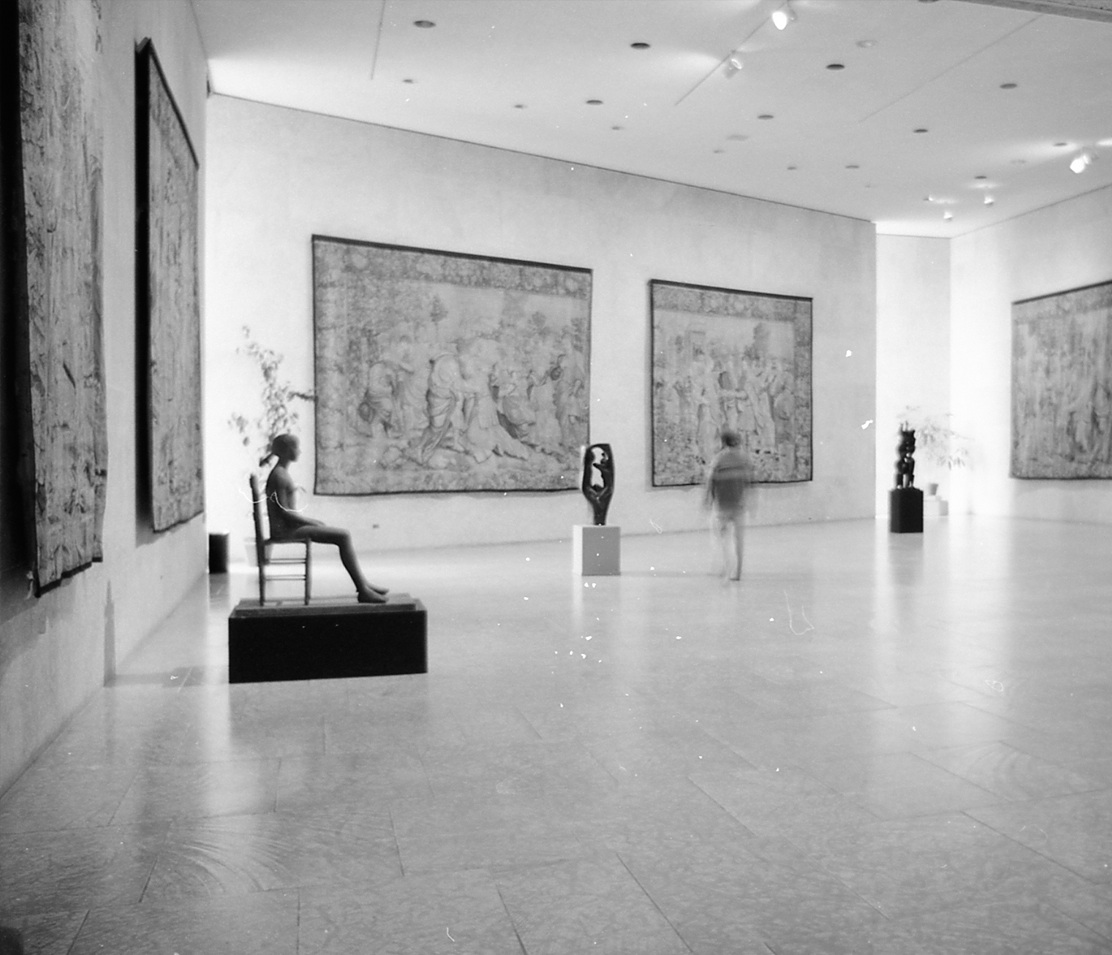 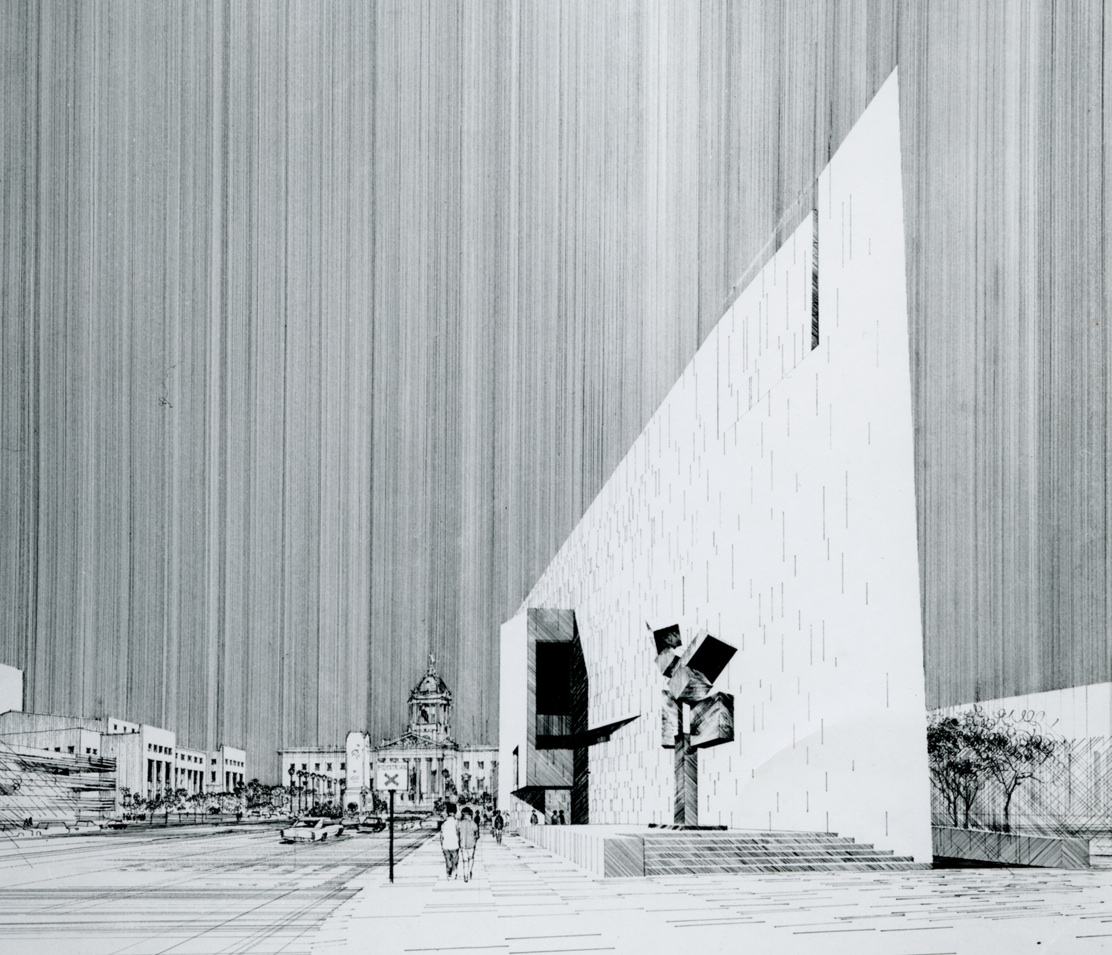 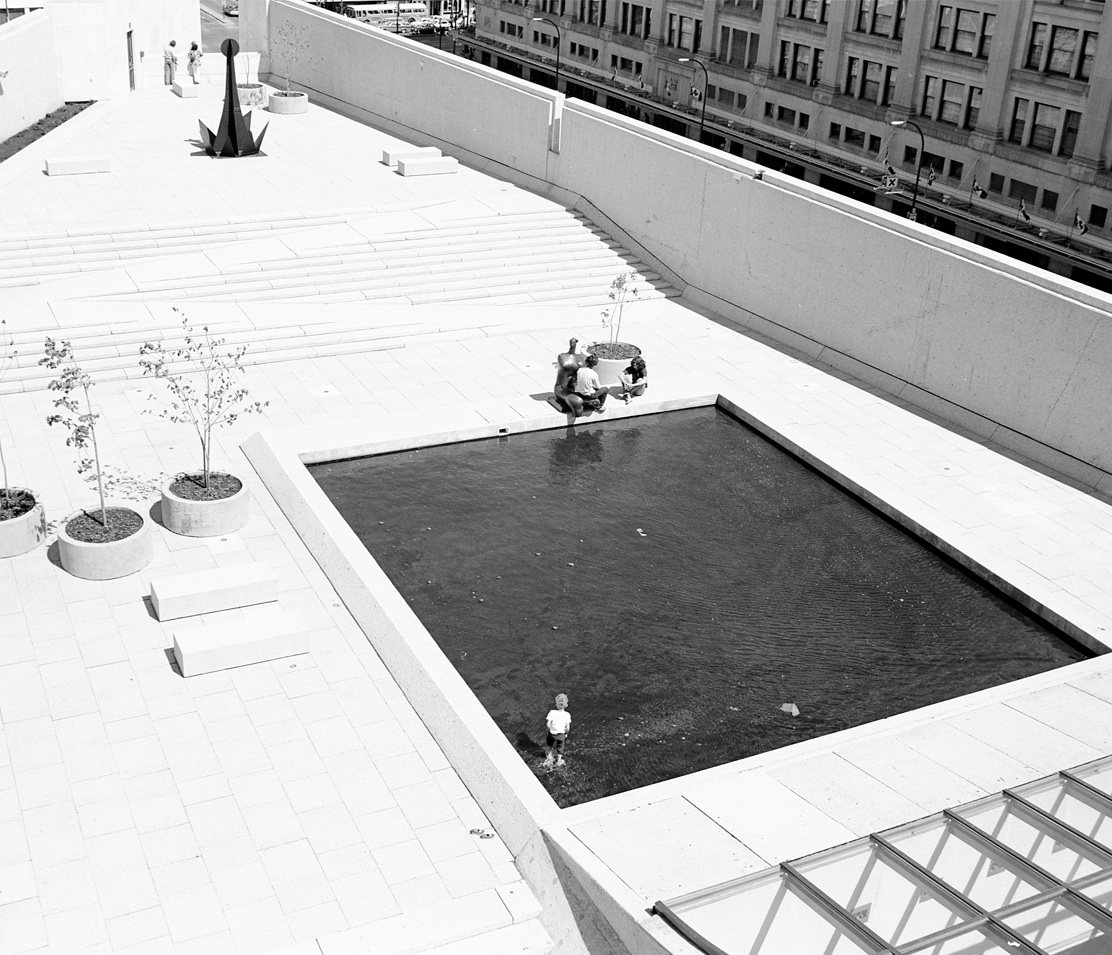 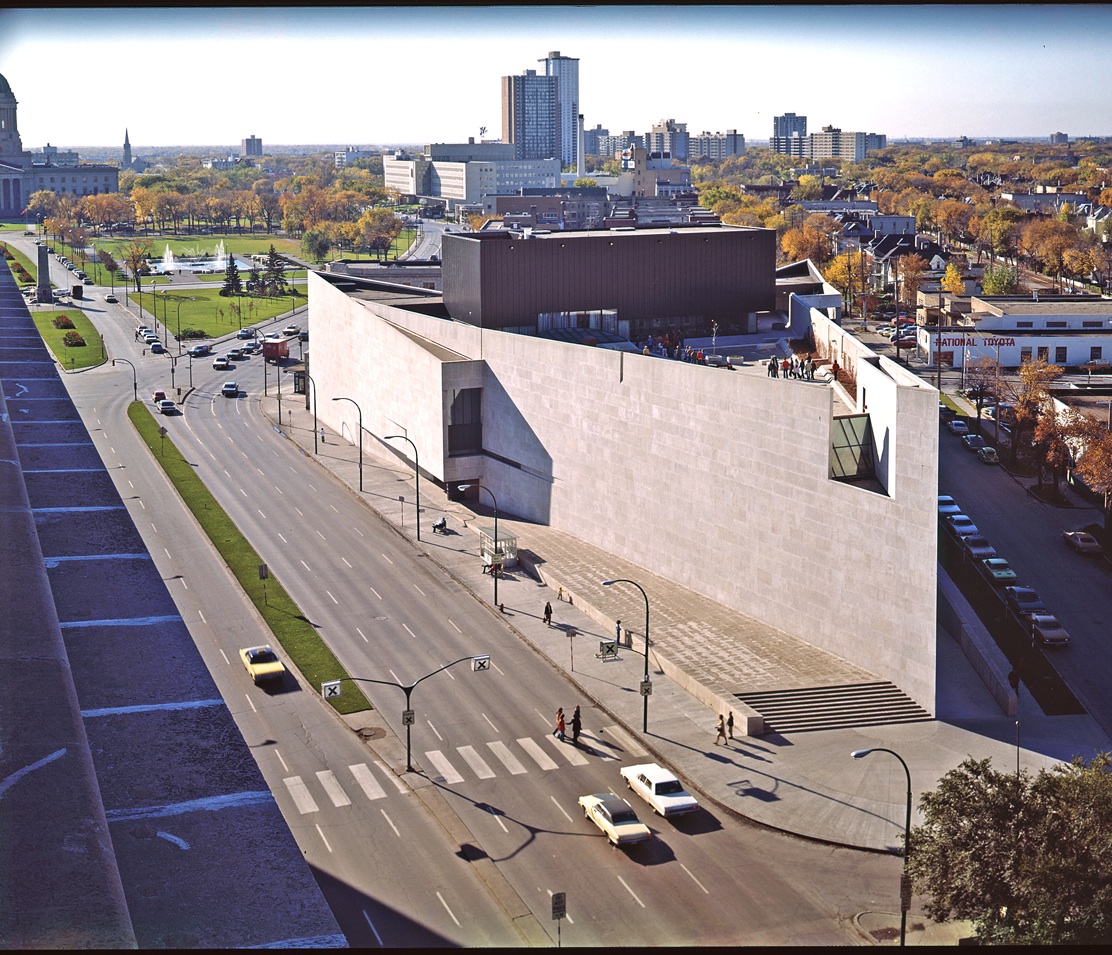 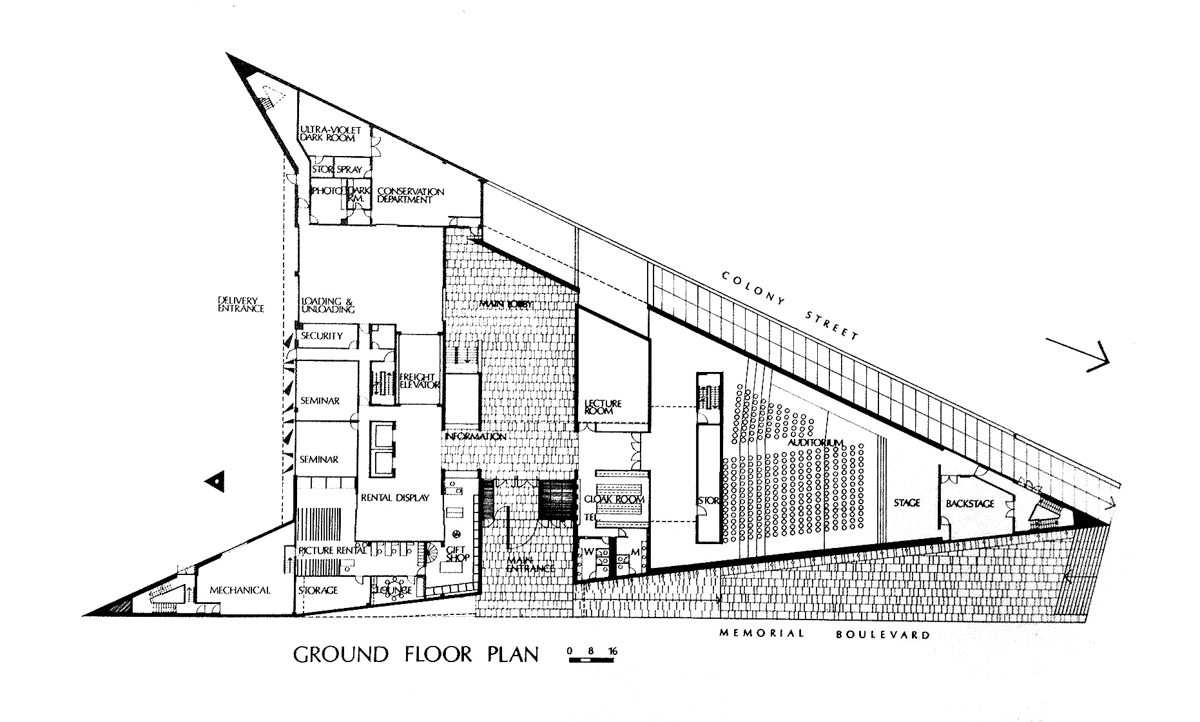 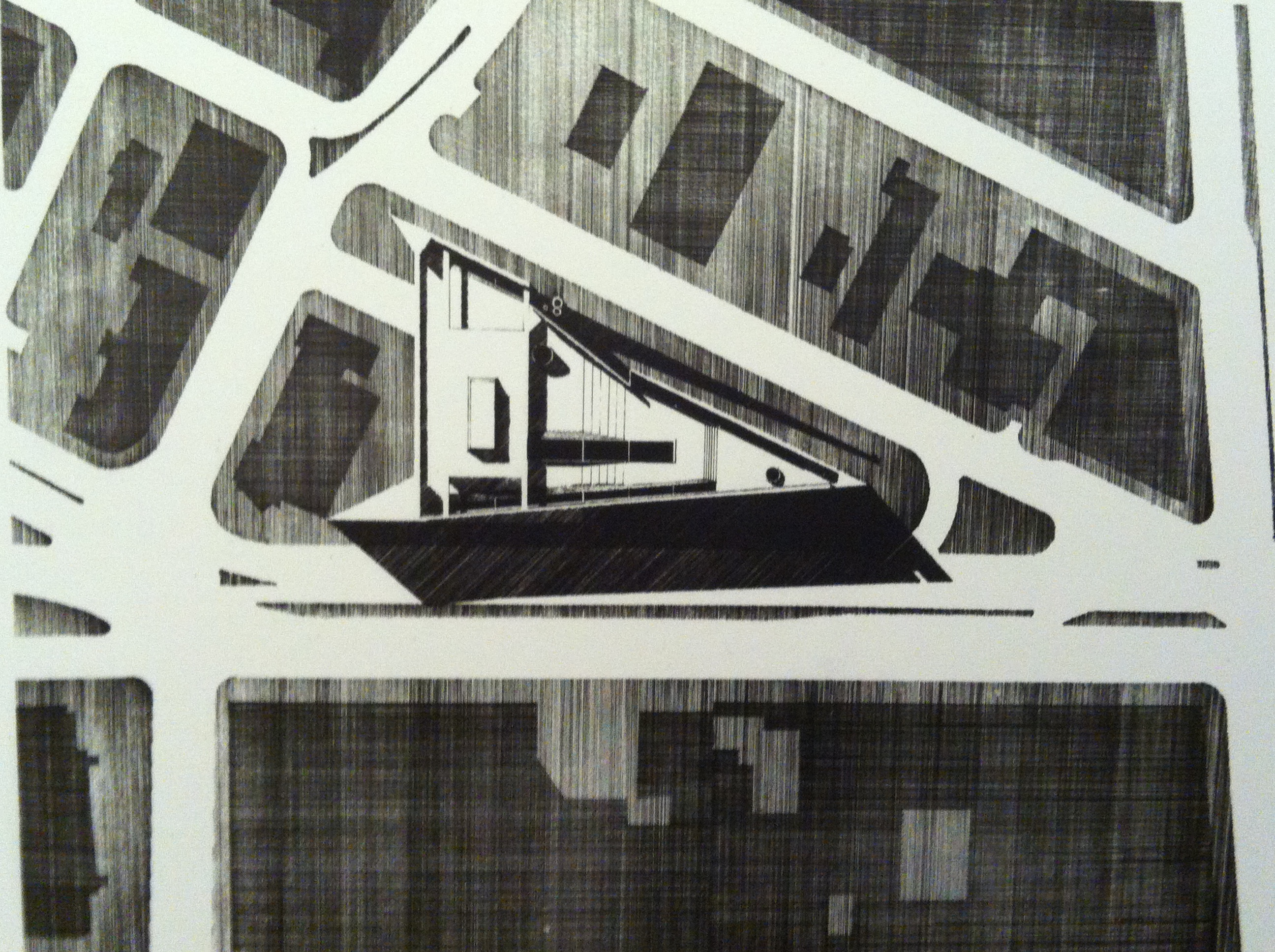 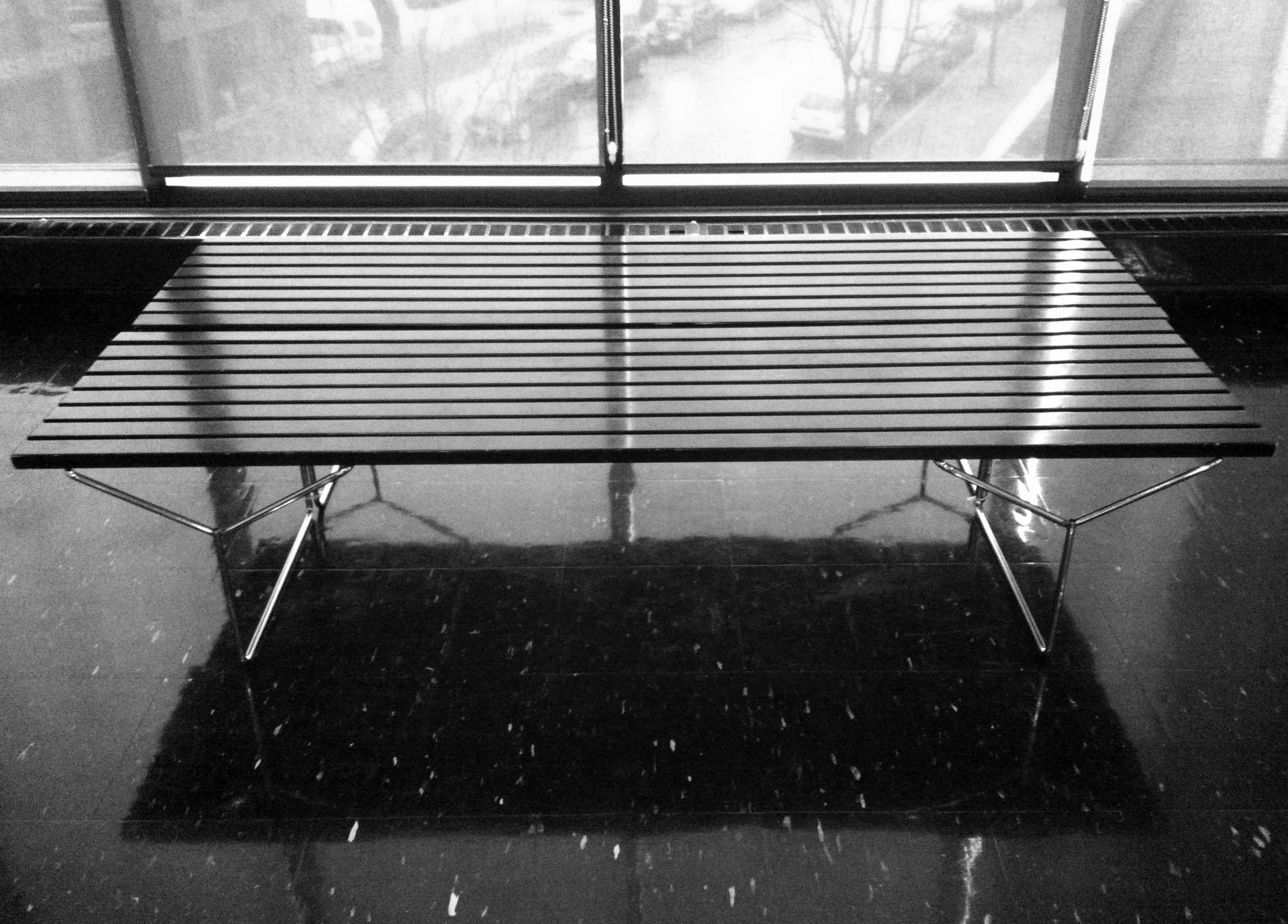 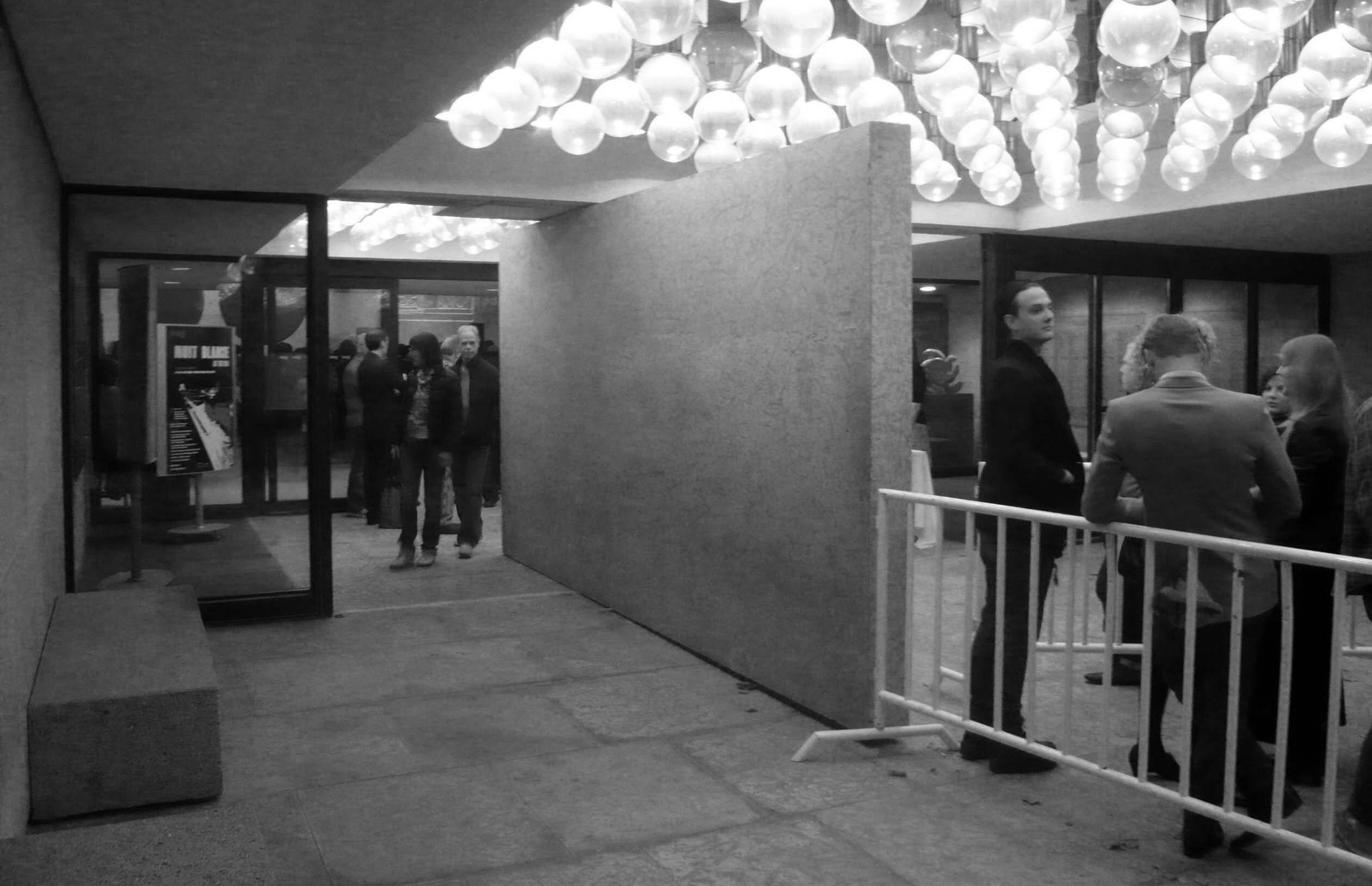 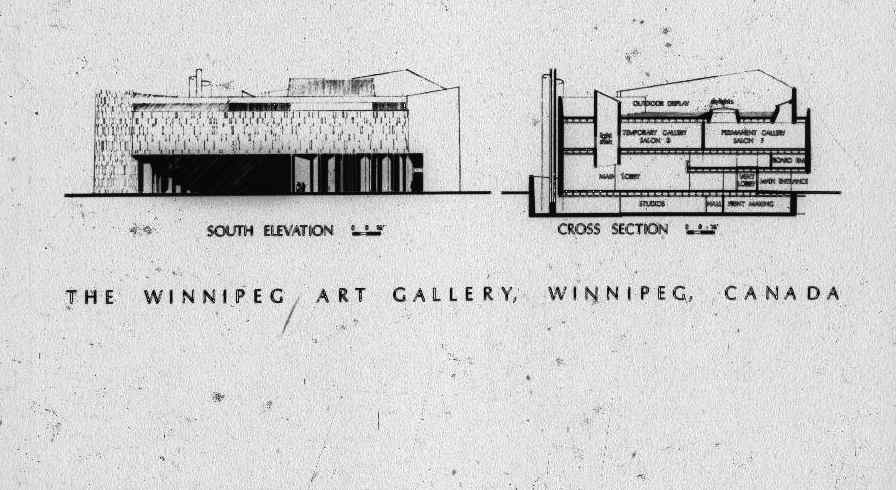 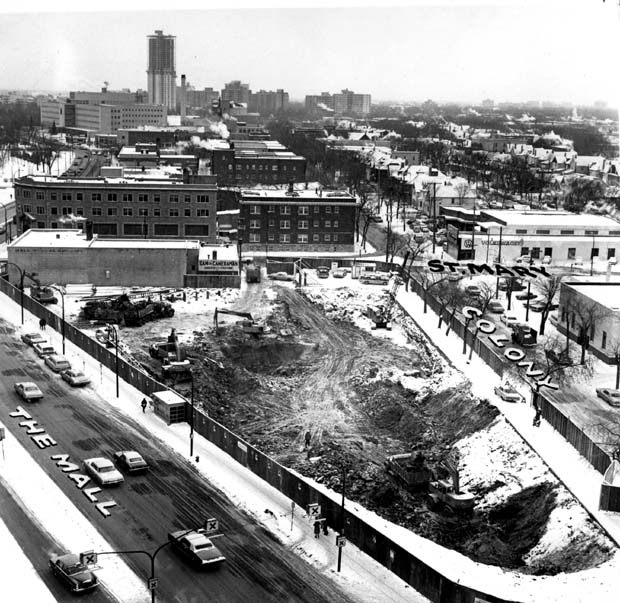 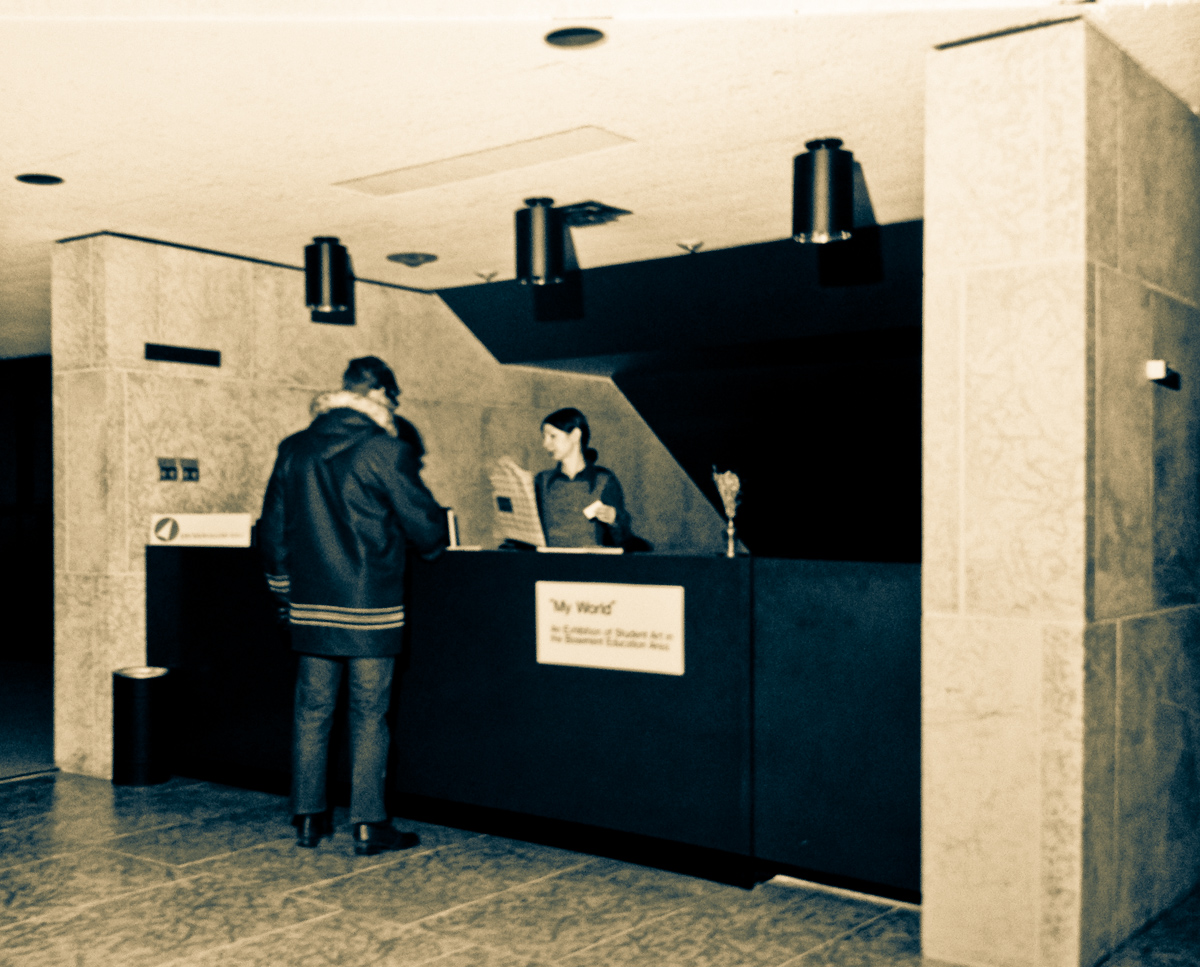 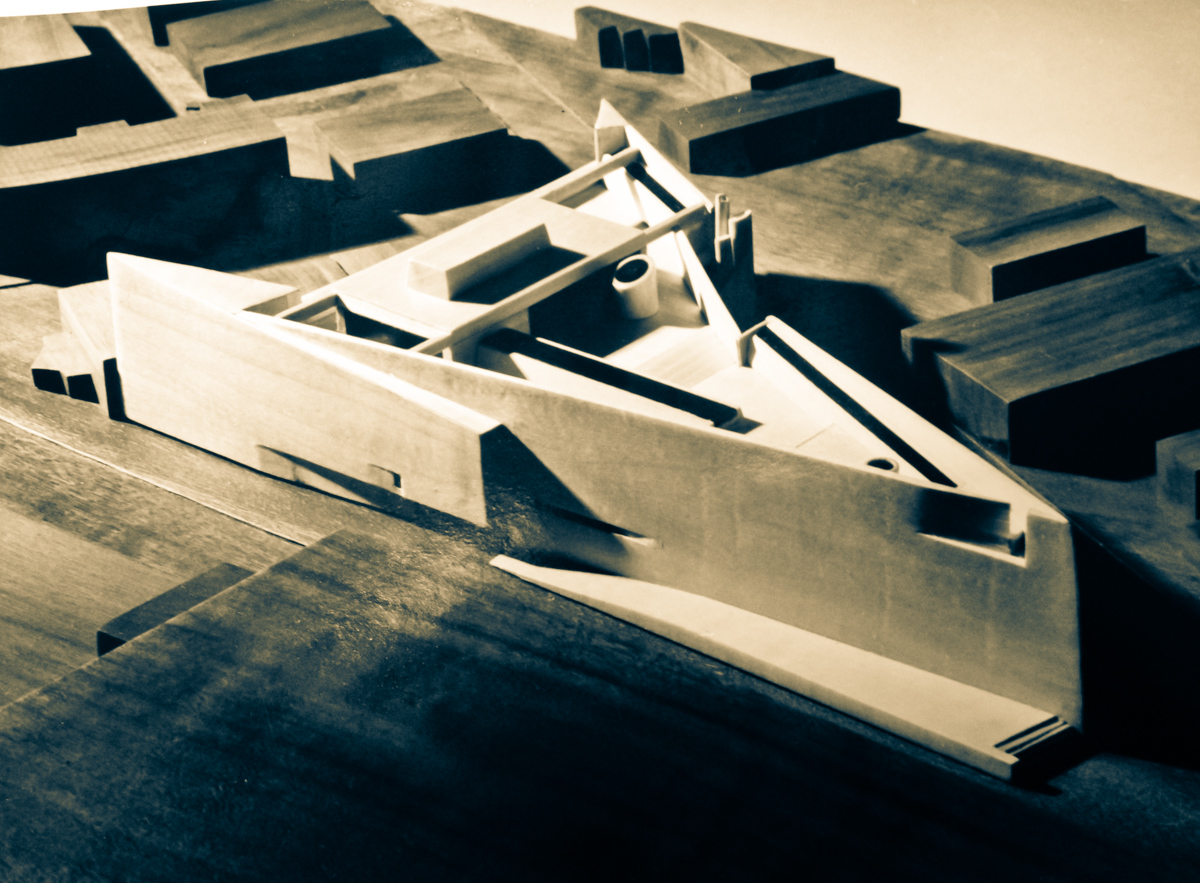 “The building for the Winnipeg Art Gallery must be good architecture – not merely well built and adequately equipped, not merely functionally planned, not merely aesthetically attractive both within and without; it must be all three.” (John A. Russell, Dean of the School of Architecture, University of Manitoba, 1966)

The site of the Winnipeg Art Gallery (WAG) was for many years home to a long building facing Colony Street called Cinema Centre, which contained the offices of Columbia Pictures, International Film Distributors, the Censor Board of Manitoba, United Artists Corporation, Sovereign Films, Universal Pictures, Warner Brothers and Metro-Goldwyn Meyer. A large vault for film storage spanned the rear of the building, and behind it was a laneway that has since been moved. Sharing this site was the Mall Medical Clinic (280 Memorial Boulevard) and a small retail building housing Sam the Camera Man. Both the film and retail structures were demolished to make way for the Winnipeg Art Gallery in 1969. The clinic building, which was converted for use by WAG's studio program, was demolished in 2017. Construction of a new WAG Inuit Art Centre, slated to open in 2020, began in 2018.

The WAG site, an arrowhead shape slicing northward, was secured under the supervision of the building committee with the University of Manitoba's Dean of the School of Architecture, John A. Russell as a professional adviser. An international design competition was subsequently launched, and of the 109 entries, unanimous favour was given to Winnipeg architect Gustavo da Roza, who at the time was on faculty at the School of Architecture at the University of Manitoba. Da Roza’s proposal was called bombastic and brilliant, its impact on the landscape forceful ("Winnipeg Art Gallery", Canadian Architect, July 1972). Jonas Lehrman, critical of the new art gallery being a retreat for the initiated, admitted that the clean shape of the structure had “clear definition, reinforced by sharp modeling and tapered walls, that reads well in the bright Manitoba sunlight.” The Winnipeg Art Gallery is unquestionably da Roza’s most renowned work, which according to the architect used “load bearing walls of Manitoba limestone to affirm and crystallize the character of [the] northern prairie environment.”

In the design and construction process, Gustavo da Roza partnered with local architectural firm Number Ten; da Roza was responsible for design, while the firm performed both the architectural drafting and project management.

The interior serves many masters, the foremost being the security, care and preservation of the art collection through highly controlled mechanical systems that maintain the atmosphere and wall surfaces at a constant and controlled temperature and humidity. The main gallery space is on the third floor, with a smaller exhibition space, library facilities and offices on the mezzanine level. Interior finishes include an abundant use of Manitoba limestone for the walls and floors of the entrance lobby, the lounge between galleries on the second floor and the primary processional stair. A massive skylight bathes the open centre foyer on the third floor in light, and is set into a rooftop sculpture garden. Kitchen and restaurant facilities occupy the fourth level, with access beyond to the rooftop terrace.

The main floor (Ferdinand Eckhardt Hall) is a generously-sized, adaptable, double-height space, sheathed in saw-cut limestone. A gift shop and art rental shop, conservation lab (originally located in the basement), the main desk, security area and a 320-seat auditorium complete this level. The basement houses the gallery’s vault, workshops, and at one time, the WAG’s educational department and studio programs. A steep loading ramp on the west elevation was included to serve the basement level. Virtually every room in the building has a different shape, and ceiling heights vary.

While the appearance of the Winnipeg Art Gallery remains much as it did at the time of its construction, numerous building projects have been required for the ever-expanding collection and gallery programming. The WAG purchased the former Medical Mall building at the corner of Osborne Street and St. Mary Avenue in October 1995, to house studio programs. In 2003-2005 a significant expansion of the basement vault storage area enhanced the Gallery’s ability to manage, maintain, and transport its collections and incoming exhibitions. By the mid 1990s, Winnipeg's harsh climate had significantly damaged the limestone exterior, and it was reclad in 2001. The auditorium was restored, the roof repaired and the rooftop garden was returned to its original design and purpose as a sculpture garden in 2009.