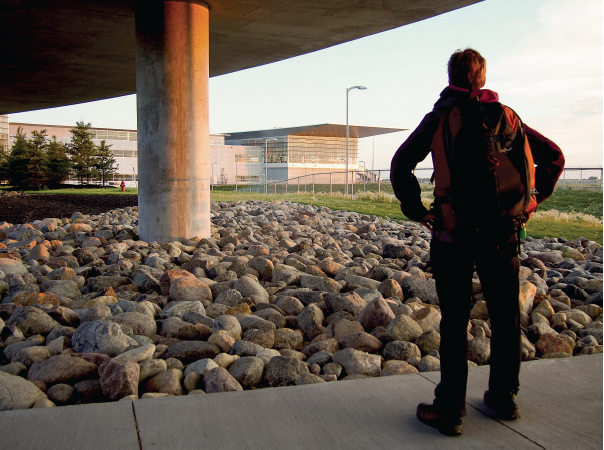 Walk to the airport-an architectural tour

Tour starts at 521 Raglan Road at 1 pm on October 20th. No need to register-just show up.
It's a crazy idea, something you're not supposed to do. But walking to YWG, whether for pleasure or to catch a flight, is entirely possible. We’ve done it. For the adventure of exploring places normally off the pedestrian road map. And for kick-starting a travel-light, carry-on-only vacation to Europe.
Want to try it, too? Then join walkers David Firman and Gail Perry on a 3-hour round trip, starting in the Wolseley neighbourhood and winding through residential, commercial and industrial areas to James Richardson International Airport. We’ll return by way of Omand's Creek, as it takes us by strip malls and big box stores -- all those place you usually drive to -- and through surprising stretches of restored prairie.

En route, we'll explore such architectural gems as St. James Church, find hidden vest-pocket parks, investigate austere industrial parks and reflect on airports lost and new. But, most importantly, we’ll take ownership of places in our city where no pedestrian was meant to tread. And, who knows? Maybe your next Hawaiian junket will start with a jaunt to the airport.

This will be a longish walk of about 12 kilometres, entirely on sidewalks, paved paths or compacted gravel trails. There is an option to walk just half the distance by taking a bus or taxi back from the airport to the starting point. You’ll want good walking shoes. And it’s a good idea to bring a small backpack, water, hat and raincoat.

The tour is normally accessible for wheelchairs, bicycles and strollers.The path is paved along its entire length with the exception of the gravel Omand’s Creek Greenway, which generally has a smooth flat surface but maintenance of the path is not always up to scratch.

Gail and David are experienced long-distance walkers, both as Winnipeg urban explorers and world travellers. They have recently walked theShikoku Pilgrimage (1200), the Camino de Santiago (900km) and the Prague- to-Vienna Greenway (600km).