Yoshimaru Abe was born in Minato, Japan on March 24, 1914. His family arrived in Canada on April 20, 1927. They settled on Powell Street in Vancouver, amongst the existing Japanese, before moving to Port Hammond. Yoshimaru left school after eighth grade and joined his father working at a lumber mill.

During the Second World War, the Government of Canada confiscated property and Japanese Canadians to relocate away from the west coast. Abe was moved to an internment camp near Red Pass Junction, Alberta. He worked building the camp there before he was transferred to Tashme, British Columbia. There, he would build another internment camp for approximately 3,000 people before settling as a firefighter. Yoshimaru and his wife, Yoshi, had three children in Tashme.

Following the closing of Tashme, Yoshimaru and Yoshi moved to Manitoba in April 1947. There, he planned to work on a sugar beet farm in Sanford, a common occupation for Japanese Canadians in Manitoba. Abe was instead able to live close to Winnipeg. Because of his experience working at the Port Hammond saw mill, as well as building the camps at Red Pass Junction and Tashme, he was able to get work building prefabricated homes for Jose Construction. The firm was owned by Roy Murata, another Japanese-Canadian who had also relocated from the west coast.

In 1953, Abe launched his own construction firm, Fuji Builders, in partnership with Tucker Tanabe, Shigeto Shimoji, and Roy Murata. They hired many Japanese Canadian craftspeople, including Harry Suga, Tosh Omoto, and Akira Tamoto, who later became president of the firm. Fuji Builders was successful in part because of its association with Winnipeg firm Smith Carter and Associates.

In the late 1980s, Abe was involved in the redress campaign, seeking an apology from the Government of Canada for the abuse and mistreatment of Japanese Canadians during the Second World War. He raised awareness of the redress campaign through the Japanese Canadian publication Outlook and speaking rallies. On September 22, 1988, then Prime Minister Brian Mulroney made a formal apology.

Perhaps Abe's greatest contribution to Japanese Canadian culture and design was his role, alongside Harold Hirose, in acquiring a building that became the home of the Manitoba Japanese Canadian Cultural Association (MJCCA) in 1987. This was made possible by the $21,000 in redress payments that were issued to individuals, who were then encouraged do donate to the cultural centre. Abe built a Japanese garden at the new building, having first gained experience designing the garden for the 1971 Japanese Folklorama exhibit. He honed his skills at the Japanese Cultural Association of Manitoba centre, transforming the sterile hockey rink. He integrated local and traditional Japanese elements, sourcing wood and rocks from the Cambrian Shield and Lake of the Woods, while soliciting help from builders such as Hiro Hashimoto, Shig Sakiyama, and the Suzuki brothers. 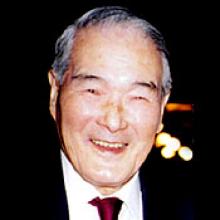